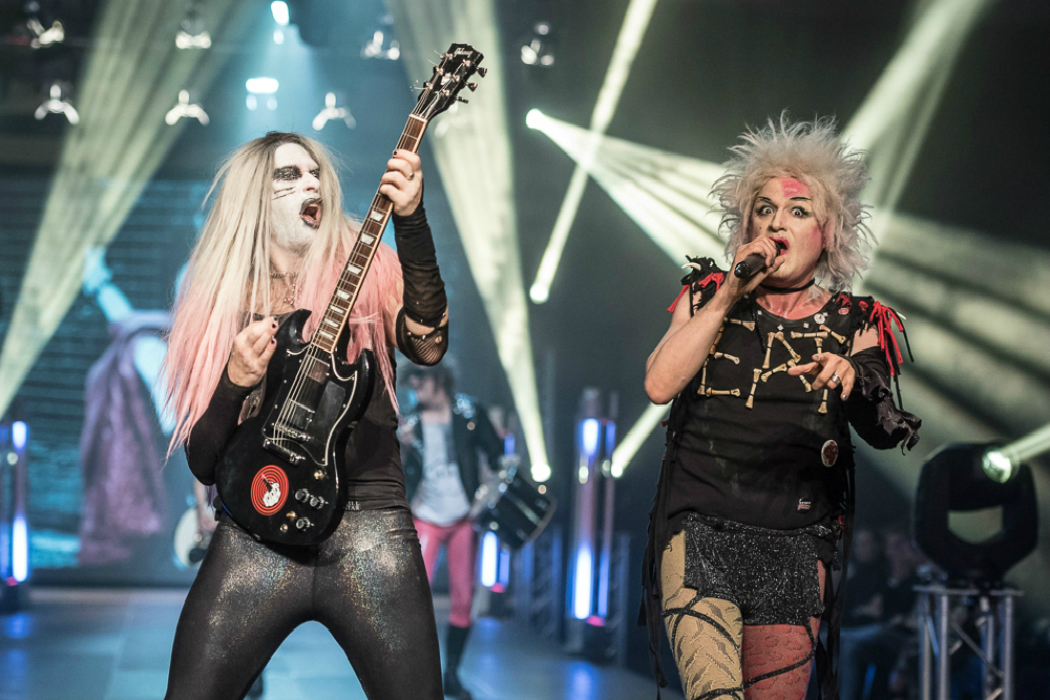 Sound of the Week: Eat Lipstick

Eat Lipstick are one of those bands you just don’t forget too easily. Their twisted mix of disco, glam rock punk and brutally honest, but lighthearted, dislike for the overly generic and saturated land of pop, with titles like ‘Murdered by Madonna’ and ‘Smells like Piss (looks like shit)’, are just what the doctor ordered. None of those glorified ballads. Just good old fashioned lipstick smothered rock. I was given a warm welcome to the band’s lair in the form of one of the finest Satanic soy burritos and bio red wines, where I spoke with two of four Eat Lipstick members, front woman Anita Drink, and (telepathically through Anita) lead guitarist The Shredder.

KALTBLUT: We’ve been meaning to meet for maybe over a year now! I think I even missed your album launch party, I’m so sorry
Anita: Well, I did defuse that mail bomb [laughs]. I’m just kidding. It’s quite all right. It’s nice to know you still have some Catholic guilt left in you though! Well yeah, our release was wonderful. I will never do anything in that location again, but it was amazing. I’m a complainer though so I need to watch my mouth. It’s the wine talking. But no, it was great, I’ve always wanted to do something in that space. It looked like an industry party space and I loved the way it felt each time I walked past. It was inside these metal containers, with an event space and a tiny little bar.

KALTBLUT: Sounds very clean, I thought you’d have gone a little more grimy
Anita: You know, I always had a fantasy of going up these little strip places all over Berlin, but those seem to be harder to go into for some reason. I don’t know, there’s this amazing one I can’t remember the name of, it’s just incredible. They like, took a mudflap girl, you know the silhouette you see on those trucks? They put her on a pole and juxtaposed it, and I just thought, ”Oh you guys!”. The actual place is in a really weird location on the way to the airport. I just remember seeing it all silver on the outside except for the pink cameo of this mudflap girl. So anyway, I had this fantasy where I wanted to pay all the dancers all night with the band playing, the bartender is working her ass off and the people are in there like, “Why did we allow these people in here?”. But really it’s just a bad location. There’s a sex place nearby here that I was thinking of too, in any case we decided that bigger is better with our band. We’ve done a lot of smaller gigs before, and with the album release we just wanted big and fabulous!

KALTBLUT: So what is coming up?
Anita: We have the release for the video which is coming up October 27th at Monster Ronson’s and we’ve treated that place good and bad, so now they’re going to give us what we need. Shredder is going to be DJing, there will be surprises and then the video! Our first day of official shooting was September 2nd and we used the same location for the whole thing. The people who have been doing it are two film & media technology students who just finished their bachelor degrees so they were really keen and really smart. I had never seen their work before, but everything that we storyboarded and talked about just worked out fantastic.

KALTBLUT: Will it be a huge difference from the earlier videos then?
Anita: Yes. Completely different. That’s what I aspired to do with those videos because basically it’s been me and Shredder who have done all the production and directing, mostly me. It’s not really directing though it’s just mainly yelling orders [laughs].

KALTBLUT: I love how trashy they are though, like a super old school VHS
Anita: VHS is the mode I’m still in though [laughs]. But I can’t really give you any more details on the new video other than it’s completely different and it’s a new song called ‘Born 2 Be Xerox’ from the album. The song is about two things. It’s about a special place in San Francisco and it’s about turning yourself into an instant celebrity by just going down to your local copy shop, getting a nice picture of yourself, getting a black & white Xerox and putting it up on the wall. And also, make it as big as you can! So when your friends come over they’ll be like, “Who’s that!?” and you’ll act, matter-of-factly, “Don’t you know? It’s me!” [laughs].

KALTBLUT: Are you hoping the trend will catch on?
Anita: Girl, I have tried to start so many trends. If it wasn’t for Betty and Shredder coming along I’d still be staring in that mirror, repeating, “One day it’ll happen!”. Well, really the idea of the song is that you can be famous without having to be. The idea is about print, and bigger is better. We love black & white images too. It’s all about living in a black & white world. Xerox yourself until you become… immortal.