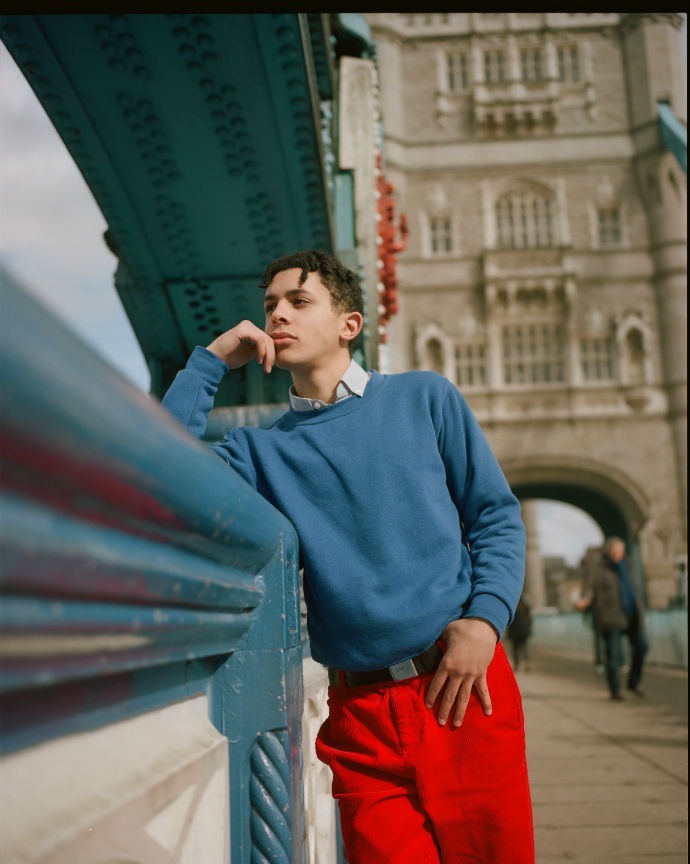 Sound of the week: Jimothy

The rising popularity of Jimothy (Lacoste) leaves some baffled by his shtick, if indeed it is a shtick, whilst others chug happily along to his irrepressible energy and boyish charms. A prolific artist with a lo-fi DIY aesthetic to many of his videos, juxtaposed with sharply dressed high fashion and pop rap sentiments, the young and fresh-faced Jimothy is taking his ascent in his stride. Featured in the likes of i-D, Vogue and even the Guardian of late, he has managed to capture and even drive the zeitgeist as part of the young urban ‘youth’. From rapping about finding your future wife, not taking drugs and purchasing designer socks, Jimothy, is taking the weird and wonderful mainstream.

Standing outside Camden’s iconic Koko in London, it’s early but there’s already a palpable buzz building. The young and excitable crowd have started queuing in line for the sold-out show as the usual touts loitering around the venue whisper “Jimothy” in your ears. Arriving at the end of the current run of his solo UK dates, the penultimate show is somewhat of a homecoming for the north London boy. Jimothy’s following has an almost cult-like quality and his live shows complete with set dressing, self-produced videos on a loop and energetic dance routines, he certainly does not disappoint. Jimothy not only dropped his co-directed video to his new single ‘Getting Burberry Socks’, but the audience’s thirst was also further quenched by his sister’s surprise onstage appearance playing bass on his breakthrough track ‘Future Bae’. We caught up with Jimothy pre-show to try and get to know the rather secretive artist a little better.

KALTBLUT: First, was there a story behind your name Jimothy Lacoste, is it like a character you embody? And why have you recently dropped Lacoste?
Jimothy: It’s far from a character. My real name is Timothy and I always thought to myself the long word for Timmy is Timothy but for Jimmy, there’s no Jimothy! so I’ma take that, Jimothy! And it sounds wavey too. The Lacoste comes from people in Bilbao who used to always wear tucked in polos, slim trousers, nice loafers. That really inspired my dressing. Also, coming from a graffiti culture, everyone would wear Lacoste so it is a big part of me growing up, the culture behind it. As for dropping Lacoste, it sounds nicer. Just Jimothy. Lacoste is still there, it’ll always be there. The cool people that knew me from before will always know this.

KALTBLUT: We don’t agree with this, but you often get asked or people assume that you are joking or are a joke. How does that make you feel?
Jimothy: I feel it disrespects me. If it was a joke, a lot of people that do music as a joke, they don’t put as much time and energy into it. And I put in lots of energy in what I do, my productions, instrumentals, how I write. Even if it’s a repetitive song, it’s really difficult to write one. It may sound jokey but at the end of the day, if I am going to make it sound lit, it’s always going to sound a bit funny. Sometimes I will make a song where it is intended for you to be amused. Take Migos, for example. No one is going to say the Migos are a joke rap group but [when they perform] they will come out amusing. Like my song Getting Carjacked, it’s not supposed to be a joke but amusing. That’s a fictional character but there is still meaning behind that and it’s still about me, my background. 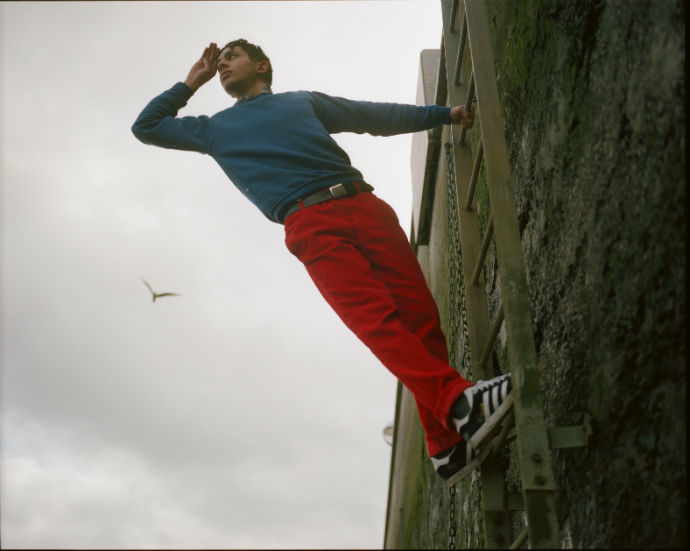 KALTBLUT: You’ve occasionally addressed dyslexia and your struggles in school. How did you tackle and overcome these challenges?
Jimothy: I never let anyone or society bring me down. I love myself so much, I never thought of that stuff as bringing me down. I never saw it as a barrier in life never. I just carried on and just continued focusing on having fun and things went good!

KALTBLUT: Your mum has been a constant and it’s clear that you love her. How was that growing up, just you and her?
Jimothy: It’s been really really beautiful, just growing up with my mum. You learn a lot. You do need a dad there though. If you only grew up with a dad, there would be a bunch of cons. If you just grew up with your mum, there would be a bunch of cons. But if it hadn’t been for her, I wouldn’t be here in terms of wisdom, making decisions, who I hang out with, sussing people out – that’s all her.

KALTBLUT: You have a distinct fashion style, a throwback to retro high fashion combined with contemporary styles, you’re a sharp dresser. Do you have any favourite designers or brands and why?
Jimothy: My favourite brands are any brands that have had history, they don’t try hard and they just get it, they get people’s style. For example, certain brands will do a collection and they decide ‘we know we are going to target these people’, and they get it and they smash it. They’re just the brands that I really like. I’ve never needed expensive brands to look good. I first started wearing everything second hand and classic and I still do. I have a Gucci belt here, and Prada shoes there but that’s not really for the brand but for the style and design.
The brand stuff is just the icing on the cake and to remind yourself you’re doing well! My favourite brands are probably like Gucci, Ralph Lauren, Prada, Burberry.

KALTBLUT: How did you start getting into making music?
Jimothy: I was making a bunch of instrumentals from the age of 12/13. I was just playing the piano, freestyling on there and recording it and thinking that sounds good, really putting myself up. Then I decided to write to a song on there one day followed by a music video for it the next day and nothing happened after that. I didn’t have any intention of any fame or clout or anything. It was literally to just say to my friends here’s what I’ve done and for me to look back on it when I’m older like damn, I am proud of myself. It just started from doing it for myself, for me to listen to myself, and my friends to listen to it.

KALTBLUT: Who or what are your inspirations or influences behind your work?
Jimothy: Probably music that I have always heard my whole life like grime, garage, old school r&b, pop and hip hop, trap. All those proper influenced me. Artists like King Krule, Yung Lean, Michael Jackson, Spooky Black. People like that are proper. I think this is sick and that I can do this myself.


KALTBLUT: The way you tap into London lyrically and visually gives a real sense of the capital. Is there any unusual favourite or secret areas you can share with us?
Jimothy: (After much deliberation) Probably Morrison’s Carpark in Chalk Farm. That place is cool! It’s spacious and there are characters there you know? Good for tourism. Cos real Londoners go to Morrison’s! (NB contentious claim)

KALTBLUT: We absolutely love your dance moves. How do you come up with them?
Jimothy: I just freestyle them! I’ve always been able to dance, always had rhythm. All I focus on is my legs, shoulders, hips and feet and it usually comes out well. Depending on how I am feeling on the night and day, if I feeling a certain way, it’ll come out more hyped, and sometimes it’s more chilled. It depends on the mood.

KALTBLUT: Life can obviously get quite busy and exciting. However, what do you do to unwind/relax?
Jimothy: I like to do shows. They make me relaxed. After the show, I feel VERY relaxed. I go out, graffiti, sometimes I meet a friend. I’m not good with big social groups. It’s not that I’m shy, I’m too lazy to join in conversations and I find it boring. I prefer intimacy really. But how I unwind personally is probably graffiti.

KALTBLUT: What else can we look forward to this year from you? Is there an album on the horizon? Tours?
Jimothy: There’s an album coming soon. I have an Australian show where I am opening up for Rejjie Snow (26 Apr – 11 May) it’s going to be an amazing experience, I am very very excited! Others include Strawberries and Cream, Longitude, Dour Festival (Belgium), TRNSMT, and hopefully many more!

KALTBLUT: Finally, how are you getting on with finding your future bae?
Jimothy: The more fame that gets created, the worse it is. The girls get too suspicious when I talk to them. So, it’s talk to either a girl on the same fame level as me but they usually have issues! Or talk to a girl that doesn’t and then they’re like, why is he talking to me? He’s obviously got all these other girls, and that’s not true! Like the movie stars say, you gotta find your wife before you become really famous! So, at the moment I’m just like if she comes, she comes, I would rather just focus on the music. And just let her come you know? But she’ll be here soon…

KALTBLUT: Any last words?
Jimothy: Yeah, yeah…(cheeky grin). Life is getting quite exciting!