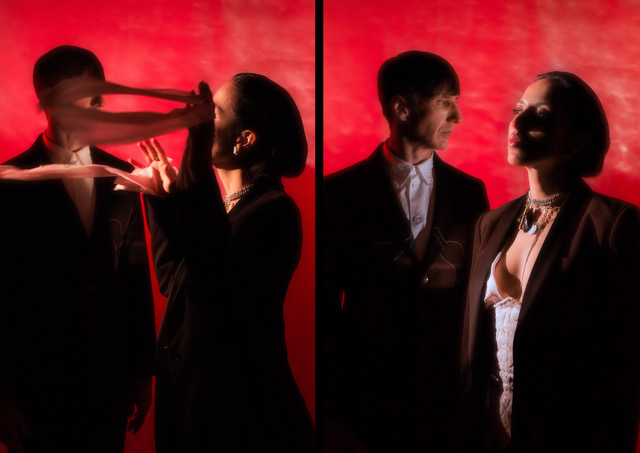 Sound of the Week: Pierce With Arrow

Pierce With Arrow is the collaborative project of the US electronic music producer Troy Pierce and Colombian audio-visual artist Natalia Escobar, also known as Poison Arrow, born out of a shared love for deeply melancholic musical moments, which are more suitable for a relaxed candle-lit living room rather than a dance floor. The duo’s first release ‘Shatter’, a multi-faceted endeavour inspired by the Greek myth of Echo and Narcissus will be released on the 19th of March via Dais Records. Having created a collection of shadowy, surrealist videos as content for their live performances before then writing music, which was inspired by those visuals, Natalia and Troy have also teamed up with Mark Buxton for an exclusive scent to accompany their debut release. We caught up with Natalia and Troy and asked them about their unconventional way of production, their collaboration with each other, and Mark Buxton.

KALTBLUT: Pierce With Arrow is a collaborative project between you two. What inspired the collaboration, and did you both instantly know the direction you wanted to take with it?

We started our collaboration around 2009 doing sound pieces for Natalia’s installations and videos. These projects laid the groundwork for ‘Shatter’, an audiovisual project incorporating sculpture, and live performance. The project has definitely evolved from its original concept while the themes that formed the foundation are still very present.

KALTBLUT: The LP was produced in a rather unconventional way, with the visual assets coming before the music. What motivated this process, and how did it change your creative approach?

The initial idea was to make a short film and write the score to it which was a totally new way of working for us. We ended up making ten vignettes inspired by the Greek myth of Narcissus & Echo and scored them. We used a lot of field recordings and textures from the videos, we also used the visuals as the guide of our arrangements, revisiting them to find inspiration. The score became our album ‘Shatter’ and the films became the basis for the music videos as well as the visuals for our live show.

KALTBLUT: You’ve said that ‘Shatter’ is inspired by the Greek myth of Echo and Narcissus. Can you tell me a bit more about that?

We used the concept of the myth to direct our story-telling visually and then musically. The idea was never to have a literal interpretation of the story unfold on the screen. We used the ideas of longing, loss, frustration and misplaced love along with the psychological torment one goes through dealing with a heartbreak and the complications inside one’s own mind.

KALTBLUT: What are three words you’d use to describe the album?

KALTBLUT: Troy, how does ‘Shatter’ differ from your solo projects?

It’s a departure musically in the albums tempos and cinematic qualities. We slowed things down and used more disjointed rhythmic patterns than I would normally use in my dance floor oriented tracks. Creatively it was very different managing both of our input versus me alone in the studio. Our workflow ended up being more creative I think mainly because Natalia is much more experimental in her approach to making music than I am. Some of the most unique elements on the album come from her crazy ideas that I would have never thought of but ended up turning out amazing.

KALTBLUT, Natalia, did you have the same creative approach as your solo projects?

Natalia: I feel like with each project I can reinvent myself, and I like to experiment, so it is never the same creative process, especially working with someone else. It was interesting to make the videos first because we were making very visual music, the mood was completely informed by the videos, but at one point the music informed the editing of the videos, and then the new editing informed the last touches for the music; it felt like an endless parallel with Narcissus and Echo. Troy has a very organized and rational way of music-making, I don’t, so this contrast made it very interesting for me.

KALTBLUT: And Natalia, how does ‘Shatter’ differ from the work you usually produce?

Natalia: Sonically and visually Shatter is more obscure and contemplative than my other projects, and it also has a more spatial and cinematic approach than what I usually do. During the production, we had a lot of gear that I’ve never used before like the other-worldly Lyra 8, the Eventide Eclipse and the Sunn o))) Life Pedal. I even played the bass guitar for some songs (which I’ve never done before), it was so great to use all this hardware through the process, the process felt more ethereal overall.

KALTBLUT: You’ve recently shared the video to the single, ‘She Pined Away’ and it’s a very beautiful, yet haunting video. Can you tell me a little bit about what inspired the video, and what message you want it to bring across?

Thank you! ‘She Pined Away’ is a story of shattered hearts chasing illusions, haunted by their shadows and self-projections. We wanted to propose a reconfigured narcissism; a reimagining of Narcissus’ gaze into the pool, beyond the self-absorption and vanity, to a moment of intrigue on the edge of introspection, and an empowered Echo that finds a way to communicate through the words of others, in a sense, subverting Hera’s punishment.

KALTBLUT: Alongside the release, you’ve collaborated with Mark Buxton, who created a scent for the release called ‘For Electra’. What inspired this collaboration and why did you choose a scent to accompany the LP?

A scent was created in collaboration with Folie À Plusieurs’ perfumer Mark Buxton as an olfactive translation of the album and videos, and developed as an incense paper by the Japanese incense house Hako. The incense paper comes as a black leaf, intended to be burned while listening to the album and packaged within the limited Silver/White vinyl. The original idea was also that this scent would be diffused in the space during the live shows, but when COVID-19 happened we decided to postpone the release of the album to 2021.

During the first lockdown, we wanted to create a new connection to music in the temporary reality we were living. Using scent as a vessel, we decided to do another collaboration with Folie À Pluiseurs and Mark Buxton. We made a song ‘For Electra’, and Mark made a scent inspired by it. The fragrance closely traces the instrumentation and emotional landscape of the track in olfactive notes and composition. Through this synesthetic marriage, we wanted to remap the sensory listening experience and form a deeper emotional relationship to the sonic narrative, and expand the very nature of how music is consumed.

KALTBLUT: A percentage of the proceeds from sales will be donated to Colombia’s Indigenous Trans Embera Women. Why did you choose this charity?

Natalia: I created a crowdfunding campaign in June 2020 alongside Jairo Tabares and Natalia Toro to help a group of Trans Embera women in Santuario, Colombia continue to build their new community during these challenging times. By providing supplies and necessary educational resources, and help them stay healthy and self-sufficient during the pandemic. So it was very natural to donate a percentage of our sales to this cause. With this campaign, we can create a lifeline for this community currently attempting to exist without any government support.

KALTBLUT: On your website, you call your decision to donate to Colombia’s Indigenous Trans Embera Women charity “Creativity with a conscience”, and I really like that analogy. What else do you guys think needs to be done to make creative industries as ethically conscious as possible?

We are going through a very challenging time at the moment and we all have a big responsibility to the planet and to each other, as creatives, sometimes we don’t realise the power we have to instigate social and environmental transformation. We should be conscious of what we are producing, what and how we consume, who we support, and if possible, consider donating to organizations or people taking action and advocating for social justice, equality, and environmental protection, this is almost as political as voting.