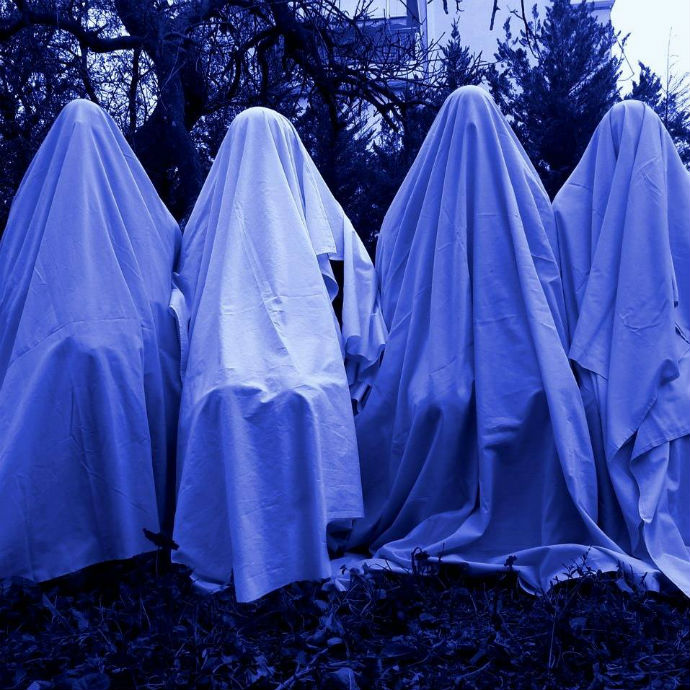 Athenian quartet Sillyboy’s Ghost Relatives make a stunning debut with the dreamy ‘In A Small Place’ via London’s Claremont 56. Marking the return of producer Charalambos Kourtaras and an introduction to the newly formed band, Sillyboy’s Ghost Relatives already have their home country in a spin as they proudly claim to be “Greek radio’s favourite soft rock band”, with listeners warming to their distinctive blend of atmospheric guitars, retro-pop synths and head-in-the-clouds grooves. From dive bars to dusky pink sunsets, ‘In A Small Place’ comes complete with trippy visuals that any Panos Cosmatos fan would be proud of. We had the chance to chat with Kourtaras about the latest release, what’s it like creating with a newly formed band and risk-taking.

“The beginning wasn’t all commercial music. I used to write musical theatre and music for movies here in Greece. Afterwards, I moved onto television to earn some money, build a studio and do productions of my own.”

For those not familiar with the moniker of the former TV commercial composer turned Balearic popster Charalambos Kourtaras, Sillyboy is a key figure of the Greek music industry, having shaped a bass driven pop sound that is now considered a major influence on local indie culture. After composing for major TV commercial campaigns in the early ’00s and lending his bass skills to electrofunk group Expert Medicine, Kourtaras launched his solo project in 2010 with the album Played on indie label Just Gazing.

With his last album out in 2015 and a tour that closely followed, Kourtaras knew it was the right time to test new waters.

“I’ve already produced three records in the past under Sillyboy, but the truth is that after three years and after the loss of a very close member of my family, I found that the people started talking to me who ended up being relatives that I never knew about. Someone told me “I’m your Auntie”, and someone else told me “I’m your cousin from another family” and that’s how I decided to step out of my solitary and gather a few friends and form the band. That’s also why I named it Ghost Relatives. So we moved on to the last record, which we recorded live, and we started playing together as a band.”

With a full band of musicians and friends collaborating under the new moniker Sillyboy’s Ghost Relatives, they took to Kourtaras’ studio to record their first full band album and let the dynamics of analogue instrumentation do the work.

“It just came to me really. The bandmates are friends that I’ve had for a long time and we always played together but I never had the chance to form a decent band and do it the proper way. I just needed to step out of my comfort zone and just be with other people. I spent a lot of time for the past records just working for myself in the studio and this is a big step for me now.

I think it’s the easiest way for me. It’s the only way to do it because I prefer to have friends and work out things together, you know, even if we have differences, but in the end, we’re still friends and we can talk things out.

When I used to work on things alone I played all the instruments myself, and now, I just give space to my friends. The only thing that I want to make sure I keep is during production everything is recorded live. After that, we will use some other people that were new to write some things like strings or samples or backing vocals, but the main production of the album is recorded live. I think this is a real honest way to do it.”

So far, international stardom has passed them by, though their distinctive songs have caught the ear of a range of DJs across the globe. One was Claremont 56 founder Paul ‘Mudd’ Murphy, who has worked his magic on one of the band’s previously unreleased gems, ‘In A Small Place’.

“A friend of mine, who I sometimes worked together with and has a label that we produced the previous records on, sent an email with the whole album and Paul basically just really liked it. He picked out In A Small Place and we started to collaborate. The email response said nothing but the title of the song!

Longtime friend and frequent video director Stathis Mourdoukoutas took the helm for the ‘In A Small place’ visuals. Capturing a poetic metaphor for the song, the journey reveals a poignant construction through a mosaic of ambiguous moments, where diverse hypnotic heroes connect in a symbolic way while breathing heavily in their claustrophobic reality. The viewer is free to speculate about the allegorical meaning.

“It was all filmed in Greece. We spent a lot of time searching for locations, maybe for about a month. We went to the same locations time and time again at different times of the day. First thing in the morning, late at night. Just to find the perfect lighting. Stathis is really into finding that right moment. The raw material has to be close to the finish line.

The song doesn’t have so much to do with a small town, it has to do with the things that you have to keep in your mind. If you feel stuck in a small place, but everything is in your mind. Most of the time, everything is open. Nobody tells you to stay in one place. You can go and do whatever you like. I think it’s more of my experience. The last three years have been very difficult and I have felt stuck inside of my head. I just needed to escape all of that. Take more risks, you know? I’m a person that doesn’t take risks often, but when I do things start to look up. The band have helped me a lot. They’ve helped me to take these risks.”