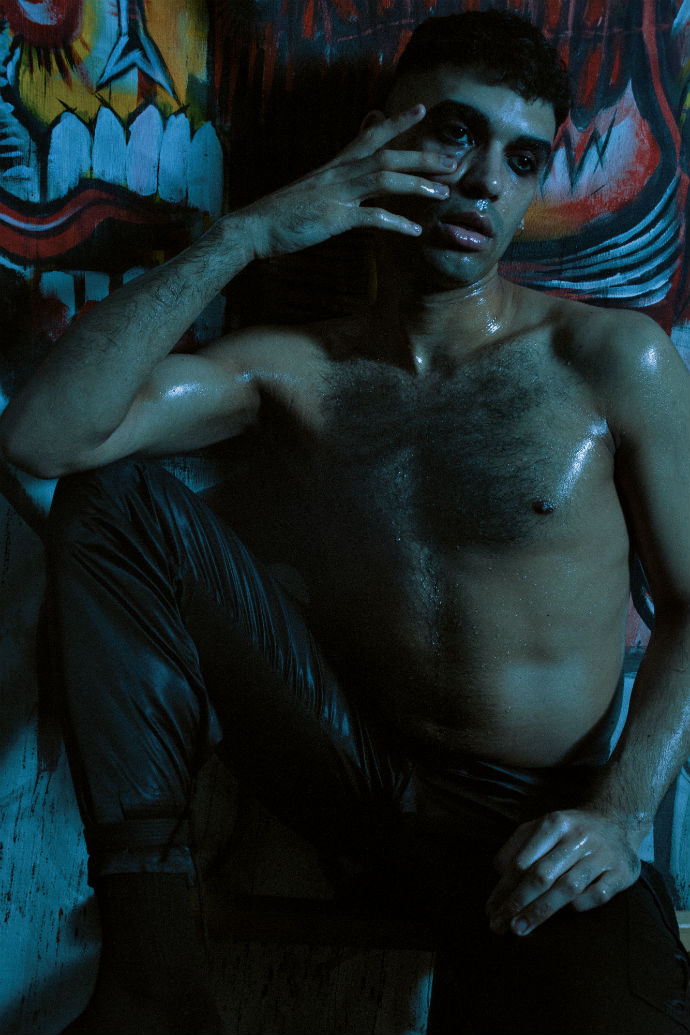 Sound of the Week: Wax Wings

London based artist and DJ Wax Wings spoke to KALTBLUT about his journey through sound and vision. Having also produced a range of impressive remixes (Maya Jane Coles’ Nocturnal Sunshine, Nimmo, The Presets, Eli & Fur and GAPS), he has also collaborated with artists such as Skunk Anansie’s Skin and Dead Can Dance’s Lisa Gerrard. Never one to be constrained by locale, the transitioning nature of Wax Wings embodies fluidity in his art in all disciplines, visually and sonically, making a deeper connection with his audience.

KALTBLUT: Cities inevitably play a part in coming of age, subcultures and defining youth in their respective microcosms. How has the move from your hometown of Leeds to London played towards your own development?
Wax Wings: Moving to London allowed me to mesh with influences unavailable to my younger self. Exhibitions, performances and the incredible spectrum of queer culture, the mad friendships I’ve collected, and not to mention just the sheer diversity of London, has all played part in moulding me into the monster I am today. I think, however, consistently there have been parallels with my artistic style from my hometown days. My confused line style and awkward faced characters which are littered about disapprovingly in flats and nightclub walls in the north, are still being strewn across my room and left as a trail where ever I seem to go.

KALTBLUT: London and its queer culture seem to be an intrinsic part of Wax Wings, you have even been described as part of “the new kings and queens of London’s LGBTQI nightlife” (i-D Magazine). Tell us a little about how the capital and its challenges helped shaped and evolved your vision in this way.
Wax Wings: I knew what I liked to do as a teenager in Leeds and that was late night techno raving at the West Indian Centre. But here, moving straight into a 2011 Camberwell, South London there was UK Bass sounds being thrown at me in every direction and I was hooked on it. I then absolutely threw myself head first into the gay scene and that definitely showed me a different facet of nightlife that I hadn’t experienced before. Raw sexual energy in sweaty club basements, broken up by insane drag queens cat walking and voguing to industrial techno and electronic sounds gave me new ideas in embracing my sexuality via my musical choices. On top of this, the London hustle made me hunt gigs (rent is always due) and go in directions like disco which immediately wasn’t my thing, but I’m glad I stuck with it and made it work in my own way because I have had some great moments on that path too. Basically, you get whatever you’re after here.

KLATBLUT: Exploring innovative ways of manipulating sounds to create an aural experience seems to be the Wax Wings way. How do you settle on your direction in each track?
Wax Wings: I never really sit down, crack my knuckles and say ‘Today I’m going to make…’. I just love playing with sounds first and foremost, recording things and experimenting with effects. Where the track goes in terms of genre is usually further down the making process. I guess this is also partly a result of having to bounce down my track parts too, giving my poor computer a rest, it never seems to be able to keep up. Once I have these track stems, I almost remix my own parts over and over until I get that yes moment. So things can start as hip-hop, and end up techno, and back into something ethereal in a few cycles.

KALTBLUT: Having taken on a number of impressive collaborations, which would you say has been your favourite experience so far?
Wax Wings: My favourite collaboration must have been with the goddess that is Roxanne Tataei. She has this infectious energy and effortlessly kisses each track with powerful emotion and turns them into gold. On one track she sang me 12 voices of a choir combined it with a politically charged spoken word, and it still continues to blow me away with the feels.

KALTBLUT: You are working towards becoming fluent in Japanese. Tell us more about how Japanese culture has influenced your work. Was this a conscious decision?
Wax Wings: Japan will always have a massive place in my heart, from growing up binging on anime, drawing manga and getting lost in video games. It’s always had a subconscious flow of my work. Seeing Japan’s IRL comic book aesthetics with my own eyes is an addictive reality, I crave it every single day. Since studying the language for two years and falling in love with the writing systems, naturally the instances of hiragana, katakana and kanji have begun to appear in my work.

KALTBLUT: We noticed that your various guises have a dark edge to them (which we love!). What is the inspiration behind this?
Wax Wings: Everything is a reflection of a reflection of everything else, creating this harmonious goth flavour throughout my aesthetics. Metaphorically speaking, I use a pallet of different outlets (art, music, makeup, etc..) and paint them onto my life (‘the canvas’) with the same darker, melancholic brush. So with this in mind, my looks become a crossover blend of these anime/illustration influences. As if my drawings were lifted from the page, all brushed in shades of gloom. Though, however sad these characters seem to look, I always hold my ground creating a jarring sad-strong juxtaposition which I find hilarious.

KALTBLUT: To expand on inspirations, who or what would say influenced you the most?
Wax Wings: I have always been inspired by those strong evil characters, they’re the complete opposite of role models but I always seemed to want to side with those guys. I prefer the complexities of how they became that way (much rather than protagonist) and I especially love how it is that they always seem to have these flamboyant queer undertones. Maybe it was through queer coding in cinema, it was my first way to connect with these traits of my own. Who doesn’t love Mr. Oogie Boogie, Hades, Ursula, HIM, Dr. Frank-N-Furter, Ryuk (the list goes on… thankfully).

KALTBLUT: With your EP coming out, it looks like you have been really busy. With 2018 around the corner, what else can we expect from you in the new year?
Wax Wings: My most recent EP ‘Gravedance’ has just dropped with geniuses from The Weird and The Wonderful X Skint Records. So let’s see what exciting things that bring. I already have my fourth EP ‘Whisper’ up my sleeve finished, so get ready to hear an eclectic mix with some more house feels, even some reggae and garage vibes involved. Recently I have gotten super into painting again and I hope to do an exhibition of these works over summer 2018. Then pulling away from the club sound, honing everything in to make way for my debut album ‘Umbilical’. Exciting year ahead.

KALTBLUT: And finally, is there a question you would like to get asked but never are, and if so, what is it and how would you respond?
Wax Wings: I never really seem to get asked about my experience with my management, maybe there is some idea that a management story isn’t as fabulous as The Weird and The Wonderful journey has been to me. In that case… It all began in an unlikely smoking area of an East London club (which in my opinion would be the last place) where I would find my life changing manager Steven Braines, but down the line I now realised, it could have only have begun in this kind of scenario. Family vibes from day one, where ideas are respected from whoever muster up the most genius plan and encouraged to be me first and the money will follow. I have the utmost respect and truly am humbled to be a part of a team so special.