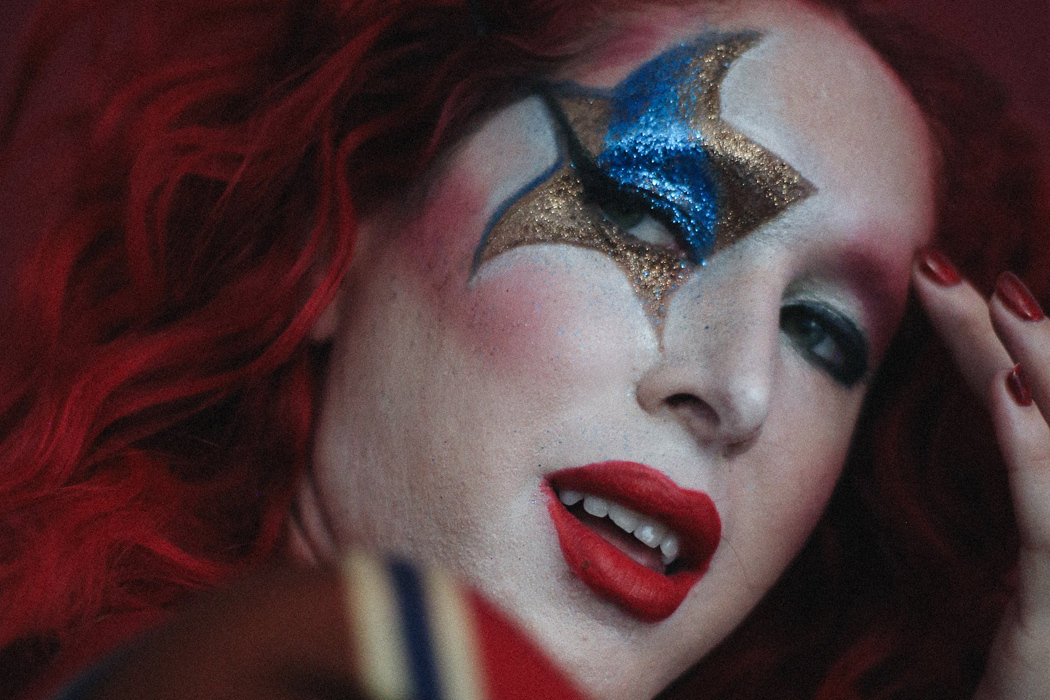 A KALTBLUT exclusive interview. David-Simon Dayan is an artist living between Los Angeles and New York City and Love Bailey is an artist living and liberating on the Savage Ranch, her queer haven just outside of Los Angeles, California, where she and her mother battled to keep their land in Temecula as she began her transition. Her work cannot be contained in any sole medium, but instead, finds expression through performance and film, as she marries technology and spirituality to share her essence, leading the regeneration of the modern club kid. Her first short film, “SLATHER IT UP” recently premiered at the LGBT Film Festival, and her artist collective, Slather Factory continually produces events globally.

KALTBLUT: You know, I often refer to people as “love,” and I feel it adds an element of warmth to the start of every interaction. I’m curious, how did you fall upon such a powerful word to become your name?
Love Bailey: When I was a young twink, I used to visit this place with my Grandmother called Cantebury Gardens, it was a year round Christmas village where every tree was decorated with a different theme. One of the ladies that worked there was named Happy. And I thought what an unusual name but very fitting because she was always full of Joy. So in my search for love, I decided to take the cliche and reclaim it. The name Love is a commitment for following my heart.

KALTBLUT: So love has become you, as opposed to being outside. During a recent ceremony I had the blessing to be a part of, I met another woman of the trans experience who, upon meeting, completely captivated me. You had similar eyes, and a certain je ne sais quoi that I was immediately drawn to. The moment she introduced herself, “Joy,” it solidified the mental connection. Such compelling terms, love, joy, happy… Where do you call home at the moment?
Love Bailey: My home right now is on the promised land. The Savage Ranch. This land is a canvas for my wildest dreams but also keeps me grounded and helps me practice living in the now.

KALTBLUT: The Savage Ranch. A sort of home for the homeless. An open door, a creatively centered community just outside of Los Angeles, which is pretty symbolic of your essence—A bit of glitz and glam injected with grunge, teetering on the edge, dancing the line between human and otherworldliness. What sparked the idea of creating this safe space?
Love Bailey: During my Transition I went through a period where I didn’t have a place to call home. I was sort of a wayward gypsy sleeping on my friends couches at a time where I was struggling with my identity. My two best friends just passed away from Cancer and more then ever I needed a place to heal. The ranch was in the clutches of my mother’s ex lover Heidi Fleiss who was trying to extort the land and start her own marijuana grow. This was a lot to handle for a trans girl just starting hormone therapy. So when Eviction day arrived and the land was legally declared ours, I was in a state of bliss to rejoice on this piece of Heaven that stood as a symbol of freedom.

KALTBLUT: It’s important to note the ranch is quite an escape from civilization. A way to truly exist in your essence, free of the pressures of society. How do you think growing up in this environment shaped or affected your self-actualization?
Love Bailey: Because I went through such a dark time I have a lot of empathy for struggling queer artists that have a hard time growing up and feel like there’s nothing left to live for in the chaos of society. If anything this experience has taught me is to not take life for granted and that my duty is to share this experience with others.

KALTBLUT: I just stumbled upon a book earlier today titled “From Queer to Eternity” — at a witchcraft store nonetheless—that I think you’d appreciate as someone who’s energetic self continually expands, understanding the divine masculine and feminine as archetypes but existing in this space of “otherness,” dipping into both buckets as a way to explore and honor the spiritual self in the face of a chaotic society that often creates feelings of hopelessness. Come by someday soon and we’ll read a passage together.
Love Bailey: Would love that.

KALTBLUT: I just got the chance to watch your film “SLATHER IT UP” and truly found a new layer of respect and awe towards you. You and I only met after you had spent some time living as Love. We briefly discussed your tumultuous relationship with your Aunt Pam, and in watching the film, I could feel the impact this had on you. But in those circumstances, we have a couple choices; use it as fuel to grow from, or let it silence us. You chose the former.
Love Bailey: For me Failure isn’t an option. There are many times during that time I felt like I had nothing to live for but in that moment the universe showed me I had to keep going, not only for myself but for those around. Hopefully my story can inspire others to do the same.

KALTBLUT: The film portrays equal parts carnal desire and spiritual being, root and crown, which you’ve seemed to find a perfect balance of. I actually study the Faye Simpson techniques of the energetic body, and find the exploration of self through centers to be wonderfully enlightening, granting the ability to not only further understand oneself, but to read others through the way in which they hold space.
Moving from polar end to polar end, it can at times seem as though the physical self and higher self are mutually exclusive— a notion thats supported over and over again through societal ideas of dualism; those that exist in the body lack the mental, a jock, or those that exist in the mind and beyond disregard the body, a philosopher or academic. I’m curious what practices enrich this balance. Is it your affirmations?
Love Bailey: Break down the layers of society & shame, Disregard the studies, theories of academia, take a moment to quiet your mind and let the magic, the mojo, the universe flow through you. You don’t need anything else in this moment to be happy. Take that moment, smell the fucking roses and just Be.

KALTBLUT: Your tagline, well, one of a few hahah, is “SLATHER IT UP. “ What does that mean to you? Is it a reversion to base, to our animal self. Powerful, liberating, free of shame.
Love Bailey: Slather it up is just that, when you feel you have nothing left to give. Dig deeper and Slather it up!

KALTBLUT: And what about, “it’s showtime?”
Love Bailey: Life is a show, Don’t be afraid to live out your wildest fantasies. The time is Now! 5…6…7…8

KALTBLUT: The electrifying film just screened at HBO’s New York LGBT Film Festival shortly after screening at Outfest in Los Angeles. Did you expect to be a part of such prominent events?
Love Bailey: I love surprises, I knew this film would take me places and for me we’ve only just begun. So although that was an honour, I have a long way to go and I’m here for the journey <3

KALTBLUT: It seems since you made it, queer and trans visibility has increased drastically, something you have been a part of, all the way from Transparent reaching wide audiences and receiving critical acclaim, which you made a cameo in, to billboards of you plastered around New York and Chicago for the release of Grindr’s online publication, “Into.” What do you feel is the next step in normalizing the trans experience. Or is normalization even the goal here?
Love Bailey: For the visibility to not be exploitive. Many companies are capitalizing on the trendy topic of Queer, Trans & Gender Fluidity. It’s important that not only are we visible, that our stories are being told and that we are employed and given fair wages. Most trans Women have to become hookers to pay for their surgeries and survive because society won’t give us jobs in the work place. We have to reverse this spell and know when to say no to opportunities because “Exposure” doesn’t pay the bills.

KALTBLUT: Completely. No human is a token, nor solely the fulfilment of a quota. I’m curious, in the face of everything preposterous beyond measure 45 has led to occur, like the repeal of net neutrality rules today, say you were to meet him. What might you say to the president?
Love Bailey: There’s no point in reasoning with him, so I might just slip his drink with good old fashion arsenic

KALTBLUT: Your online presence serves as a sort of escape, an escape from the urban landscape, an escape from the day-to-day, a release from the at times drab diurnal, especially for those without the resources and environment to live so freely. How has the technological landscape affected your experience? It seems youth of today, myself included, have the blessing of finding solace in an online community, even if tangible surroundings don’t parallel this. Does that push you to share more and more online, exhibiting everything from your shoots on the ranch to intimate experiences with men you met online?
The stories you post seeking advice about which men to meet one day crack me up. I get so invested.
Love Bailey: My life is an open book, if my story can help others and heal through my own trauma. Then so be it, It’s SHOWTIME .
So use that throat, honey. Slather it up and share your story.

KALTBLUT: And if you could give one piece of advice to queer/trans youth of today, what would it be?
Love Bailey: Know why you want to be a woman and don’t let anything stand in the way of your happiness. Reach out if you are in need of support, there are many girls out there in the Trans community you can connect with. Don’t lose hope, there is still so much beauty in life to live for. Speak up, Live out Loud and Follow your truth. Transform into the change you wish to see in the world and transcend beyond this realm of space and time.
Love & Light,
Love Bailey

Interview and photography by David-Simon Dayan