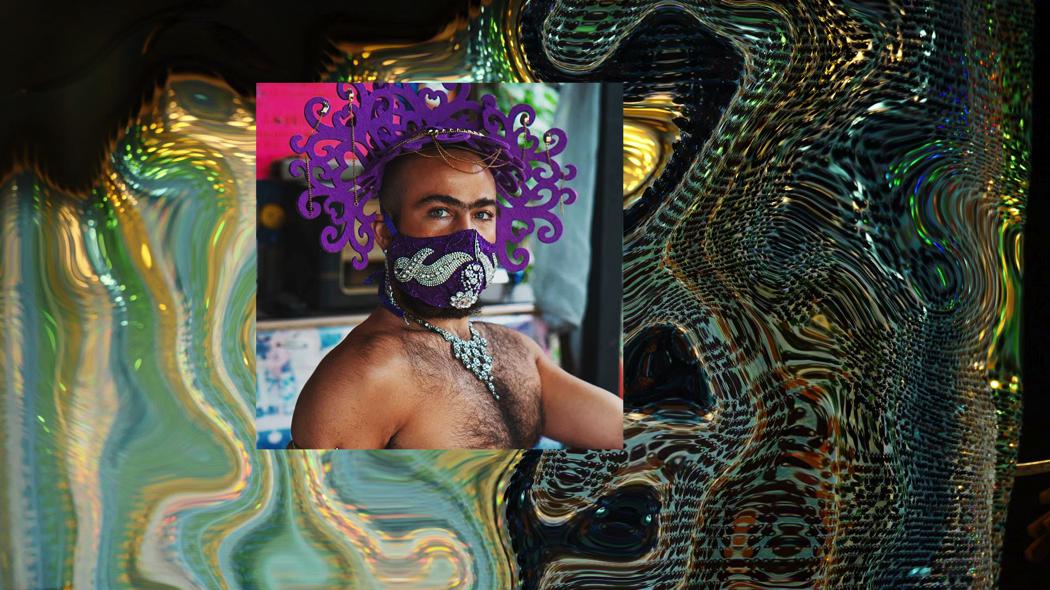 Pablo Santacana López (Madrid, 1991) is an architectural designer and art researcher based between Madrid and Berlin. His interdisciplinary work questions the visual cultures and customs of our social environments from the affective and the political. He is co-founder of the Spanish art collective Vendedores de Humo and is a member of the Berlin-based platform decolonizem21 and Commongrounding research group at Haus der Statistik.

“As a result of the global pandemic that has altered the social protocols and regulations that mediate our bodies, many communities have suffered from the lack of physical gathering as a way of organizing politically, and self-supporting each other emotionally.

The uncertainty and precarity produced by the spread of the pandemic have proved to affect society’s most vulnerable groups in particular. ; those already oppressed, marginalized, and excluded.

When the intersection of discriminatory biopolitics and antinormative values clash, this vulnerability increases.  values against normativity clash together, vulnerability escalates.

In Berlin, the economic recession of 2008 and the refugee crisis of 2015 welcomed a great number of queer people seeking inclusive shelter. The city is internationally celebrated as being home to a diverse LGBTQ+ community, who since the ‘80s have emigrated in waves to the German capital in search of metaphoric and literal shelter. Guest workers, creatives in search of unregulated environments, and youth looking to avoid the military service (whose exemption from it was automatic when registering to live in Berlin) produced a breeding ground for the progressive oasis the city has become. Already in 1919, Berlin hosted the Institut für Sexualwissenschaft, whose promoter, Magnus Hirschfeld, defined our modern, depathologized idea of homosexuality.  Even though social acceptance of LGBTQ+ people has arguably never been higher, queer people reflexively seek refuge in safely queer spaces. Far from being free of queerphobic terrains, discrimination against queer people has increased in the last years, contextualized inside an expansion of right-radical and xenophobic attacks. According to the gay counseling and victim support center Maneo, 2019 saw an increase of 30% of the cases of homophobic or transphobic attacks: physical attacks, verbal abuse, and theft.

Even if this increase can be explained by a greater reporting of such discrimination,, numbers show that in the pre-corona time, people identifying as queer felt the xenophobic and homophobic repercussions of the arrival of the AFD and their philosophies into the national political arena.. During corona, emptied streets and the closure of clubs complicated the resistance against an extreme right, who have re-armed themselves in the context of the pandemic to defend liberalism that disempowers the weakest.

The attack in Neukolln against drag performer Olympia Bukkakis during the previous lockdown is one of many examples. “A stress factor like the pandemic could lead to an increase in violence against queer and trans people”, she said. “Increase in violence emerges from a social climate that puts minorities under renewed pressure. It is more important than ever before to strengthen the way which the relevant police authorities deal with hate crime and to offer more in terms of victim protection, violence prevention, and raised awareness.”

For The Darvish,  another queer drag performer organiser together with Bukakkis of the trans/queer refugee platform “Queens Against Borders”, the rising hate against the community has stronger importance if there are no places to gather and reorganize. Queerness gravitates around nightlife, embracing the immersion and freedom provided by environments separated from normative daily life. Bars, dance halls, and nightclubs were (and continue to be) central platforms of queer culture: places of retreat from the hostility of mainstream society and an escape from an oppressive white heteronormativity. As stated by Birgit Bosold and Carina Klugbaue, curators of a recent exhibition at Schwules Museum, queer clubs are “spaces in which self-acceptance, sexual freedom, and collective solidarity can be experienced”.

Complying with the restrictions imposed to stop the expansion of covid-19, queer clubs have been constrained to close until further notice, as in the case of Neukölln SchwuZ.  The SchwuZ (short for SCHWUlen Zentrum) was established in 1977 by the political organization Homosexuelle Aktion Westberlin as a space of visibility and reunion for the collective, but also as a platform of the political organization holding solidarity parties, producing publications, and sharing their space to other similar organizations. After over 40 years of activity, space has been closed since April due to the measures taken against COVID-19. This situation represents not only the loss of a place to reunite, but also the loss of jobs and financial resources The dissolution of queer hubs represents another shock to the community, but it also provokes the need to reinforce other networks and ways of relating between queer club regulars and activators.

For Katana Six, drag performer and activist, this situation requires keeping up with all the regulations and hygiene manners, but above all, trying to be sane and helpful. Lockdown has been proven as being especially damaging for the mental health of LGBT communities, where staying home becomes sometimes being trapped in toxic environments, and where the necessity of community support found on queer spaces cannot be replaced by simple digital interaction.

Different clubs united with a variety of initiatives, including livecast DJ sets from empty venues and private apartments, is a format already popularized by platforms like Boiler Room. For many artists like Dj fka, the jump into the globally-accessible scale of the internet has enabled an enormous increase of visibility.  But a  higher number of viewers is not always a positive factor: parallel to an increase in hate comments and potential misuse of one’s image, diving into mainstream media can create a false feeling of visibility and understanding. When club cultures, grown out of the labor and love of trans and queer people of color whose work did not fit into other contexts,  became more mainstream and achieved crossover success, those writing its history pursued more “relevant” threads to focus on the primarily straight, white, middle-class environments of early club culture—quickly omitting and forgetting the colorful, queer senes. Once these clubs became a popular global phenomenon, it became much harder for marginalized people to remain inside the frame of attention.

The current moment of closure raises questions about the future of clubs. Though techno clubs have become less the sites of radical sexual, racial, or political intersections that some were, they remain important as places for opacity and privacy, and the expression—the rehearsal—of freedom and democracy. To raise money for such diverse organizations, including “Queens Against Borders”, many clubs and event organizers try to directly critique social inequality.  In her performance “The House of Presents” for Monster Ronson Karaoke,  drag performer Pansy has set up a solidarity payment scheme that increases the earnings for black and refugee identified performers, over their white colleagues. she has stated: “We must stop only sharing memes and start sharing access. Normalize the distribution of wealth.”

Parallels between Coronavirus and the HIV crisis of the 1980s have even been drawn, given similarities including an inept government response and the disproportionate negative impact on lower-income groups and people of color. In 1985, well before peak rates of HIV contagion, health officials in Manhattan shuttered gay men’s sex clubs and bathhouses citywide. The queer community organized themselves to support the clubs and baths in New York and self-imposed safety protocols long before the American government took direct action. The same principles of bottom-up self-organization that fought discriminatory policies to preserve sex-positive and socially liberal spaces during the AIDS crisis could guide club culture in Berlin in protecting their spaces. Keeping the lens of biopolitical control in focus would not be remiss. In a recent essay in Artforum, the philosopher Paul B. Preciado points out that a public health crisis only exposes the biopolitics which is already and always present:

The management of epidemics […] allows us to appreciate how the virus actually reproduces, materializes, widens, and intensifies (from the individual body to the population as a whole) the dominant forms of biopolitical and necropolitical management that were already operating over sexual, racial, or migrant minorities before the state of exception.

Clubs, open-air parties, and raves can be understood as “ostensibly nonproductive, or […] socially corrosive spaces.”  Framed on a context of gender dissidence and social discrimination, they become important spaces for corporeality and collectivity, “imaginative places where social, gendered, sexual and other norms might be deconstructed or reframed”.  Awaiting for them to reopen is a queer community ready to keep fighting for their safety,  their recognition, and their party.

This text is framed inside the project “Was die rechte nicht sieht”presented by Pablo Santacana López, The Dervish, Katana Six and fka at Lite -Haus Gallery in the context of “Neukolln stories”, a project organized by Nomadic Art Collective and supported by Interflugs. Thanks to Zoë Ritts for their contributions to the text.

About the project:
Was die rechte nicht sieht
Pablo Santacana López + The Dervish +  Katana Six+ fka
Supported by Interflugs
In the context of a global pandemic that has updated the social protocols and regulations mediating our bodies, many communities have suffered the lack of spaces to gather, celebrate, and gain visibility.
Berlin is home to a diverse LGBTI+ refugee community who migrated here from all over the world in search of shelter. The escape from other realities happened especially art night, where they could freely express themselves and perform their identities. Their presence as racialized bodies and sexual dissidents poses a double threat to the extreme right-wing movements that have expanded throughout the country and that have re-armed in the context of the pandemic to defend liberalism that disempowers the weakest. Complying with the restrictions imposed to stop the expansion of covid-19, queer clubs have been constrained to close, as in the case of Neukölln SchwuZ. After over 40 years open, the closure of the queer gay club represents the loss of not only a place to reunite but also of many jobs and founding support for its regulars. The dissolution of queer hubs represents another shock to the community, but it also provokes the need to reinforce other networks and ways of relating nightlife queer activists.
Queer nightlife activists The Dervish, Katana Six, and fka engage in a conversation about the solid aspects of the queer scene on a narrative that contrasts with the melted images of the empty clubs.

The title of the works recall to 1972 film Was die Rechte nicht sieht  from
Rosa von Praunheim, queer activist and film director involved in the foundation of SchwuZ club.

About the exhibition:
Neukölln Stories project brings together the disciplines of art and anthropology and includes the realization of various cultural activities: workshops, exhibitions, installations, and interventions in public space. Each element of this project deals with the concepts of neighborhood, community, immaterial heritage, and archive. It aims to promote interaction within the community and to create new networks of relationships between neighbors. This year, LITE-Haus Galerie, in collaboration with the Berlin art collective nomadicArt, intends to explore Neukölln from a new perspective, creating new connections with its residents: Neukolln stories: Memories of a neighborhood, archive the stories of Neuköliner shops and their neighbors. Instead of a formal and objective overview of the commercial life of Neukölln, we are interested in collecting the knowledge and experiences of the neighborhood and the stories of shop owners, employees, and their regular customers. Lite-Haus Galerie and nomadicArt will ask the residents of the neighborhood to share the names of local or old shops they particularly value and their personal stories and experiences connected to these places. We will realize a subjective and chronological-historical mapping of the actors and places of the neighborhood.