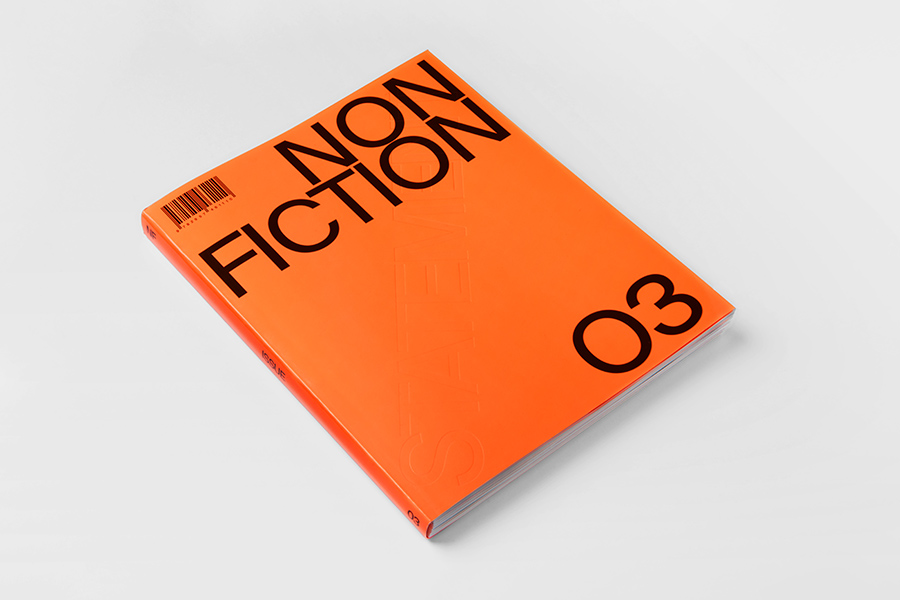 “STATEMENT”: NONFICTION LAUNCHES ITS THIRD ISSUE ON THE AESTHETICS OF ENGAGEMENT

After a second edition “On Nature”, NONFICTION continues its work of prospective by signing a third issue dedicated to the aesthetics of engagement of the young international creation. NONFICTION 03 “STATEMENT” is a trend book for image and creative professionals, halfway between a curatorial study and a creative watch, taking the stance of a stripped-down presentation invoking timeless texts to leave room for the image and the imaginary.

Starting from Godard’s quote “one does not make political art, one makes art politically”, we propose you to travel in the artistic works of 56 international artists who explore position-taking in the 2.0 era: are there aesthetics of commitment specific to our time?

The young creation makes of the affirmation of oneself a way of entry in the engagement: How to reappropriate the History and its symbols? Which affirmation of the body in new complex, fluid and hybrid existences? What does kitsch tell us about the forms of oppression? How to approach and divert the codes of the demonstration?

Thus History is reread in the light of individualities. Bony Ramirez’s paintings, Nicholas Galanin’s photos and Matthew Angelo Harrison’s installations question historical certainties by contextualizing aggression, making oppressed point of view visible. In dialogue with Toni Morison and Aimé Césaire, Ruben H Bermúdez adds: “and you, why are you black?” Far from propriety, Léa Porré dares to question our scapegoats and our collective responsibility in the writing of a Manichean history, under the features of the man behind the king, Louis XIV.

The pages that follow see bodies and matter parading, as an affirmation of resistance to dematerialization and the physical and moral barriers that the era imposes on us. Thus the black body in Shannon Bono, the disabled body in Berenice Olmedo, the female body in Kubra Khademi, the trans body in Apolonia Sokol find a voice. Far from sexualization, Carol J Adams’ ecofeminist words resonate with Athena Papadopoulos’ cut-out bodies, calling for a society of “care” for an intersectional struggle of oppressed bodies. Gertrūda Gilytė, Diana Georghiu or Gígja Jónsdóttir complete the marketing of the feminist concept with performances that derail well-being.

But the age of the self is also the age of an aesthetic of humor, intimacy and sincerity. The kitsch and saturated images, at the border of the ugly will not be without displeasing the journalist Alice Pfeiffer whose recent essay brings a very current lighting on the “nail art” of Aida Bruyère, the iridescent sofa of Sadie Barnett or the pink interior with neon of Hannah Neckel. Beyond the touching, this aesthetic of saturation is a crying affirmation of domination, as evidenced by Sara Sadik’s fictional narratives in purple tracksuits and Marilou Poncin’s tight mini-skirts, echoing the famous Parisian RER graffiti of the 1980s: “The forms of your oppression will be the aesthetics of our anger”.

Laughter turns yellow, it is time to act. With Ndayé Kouagou or Leïla Berkaoui, language becomes a performance and the text a resistance, reminiscent of the hope instilled by Amanda Gorman’s inaugural poem. From Array Collective, selected for the Turner Prize, to Marie Serruya’s colorful mini Trump, contemporary actionism is also an affirmation of the right to innocence and fragility.

Once again the young creation takes all the measure of its role and offers imaginaries acting on the transformation of the world.

NONFICTION ISSUE 03 is available for sale on request at hello@nnfctn.net ; on www.nnfctn.net and in bookstores all over France

NONFICTION is an annual edition that identifies the aesthetics, subjects and artistic devices of the time. NONFICTION is a working tool for all image professionals, halfway between curatorial study and creative watch.

NONFICTION is a trend book published once a year, with a study guideline for each edition, but is driven by a general problem: how young artists disseminate the imaginations of an era through conceptual and aesthetic proposals.

Are they sometimes in the vanguard of a future world in the midst of writing?

A project committed to the transformation of the imaginary, the book is also environmentally friendly. Printed on PEFC-certified paper and compensated 5 times by planting trees in France.