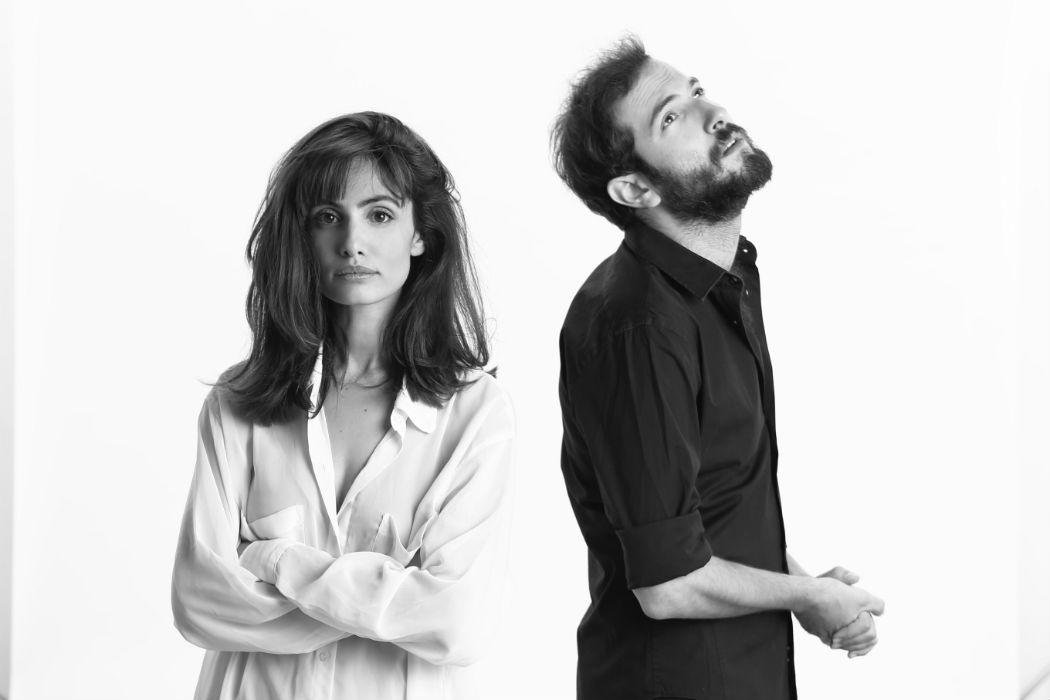 One of the best newcomers of 2016 will surely be Lola Marsh. For several months already, the North-American blogosphere and online community have been head over heels for the Tel Aviv-based duo. Gil Landau and Yael Shoshana Cohen’s first two tracks ‘Sirens’ and ‘You’re Mine’ have already racked up 3 millions plays on Spotify. The magnetic voice of the talented Yael, is sublimed by the smart musical arrangements of the multi instrumentalist Gil Landau. Championing an orchestral pop-folk with cinematographic undertones, the duo definitely establishes Tel Aviv as a stronghold of coolness. And that’s exactly what we sat down to talk about with them one sunny day in Berlin.

KALTBLUT: You’re currently on your Germany tour, you’re visited a few times is that right?
Gil: Yeah, we’ve been here last summer and a few months ago.
Yael: We’ve toured here also.
Gil: Now we just got here, we drove to Berlin actually.

KALTBLUT: Do you get used to touring after a while?
Gil: That’s weird you know, because every time before touring it’s very exciting, but before this I just thought, “Wow, I don’t have power! How will I do that?”. But the moment you’re on the move, it’s like boom.
Yael: You’re into it.
Gil: But like, seriously, just after 10 minutes it’s just like, “Fuck it”.
Yael: And of course you need to take all of the things with you, you always forget something.
Gil: The preparation before is a huge headache.
Yael: We have this huge van, it’s amazing.

KALTBLUT: So it’s Europe first then America?
Gil: Yeah, this is the first major one and we will be supporting AnnenMayKantereit. Afterwards it’s Switzerland then France, Germany again around May and June. We’ll also be doing a few festivals.

KALTBLUT: How did you guys get together to start music?
Yael: I met Gil in Tel Aviv, it’s a very small city. He was a musician so we ended up knowing each other, but we heard each other on different occasions. I heard him playing on his birthday party and I was there with friends, so he played and I sang something, I don’t actually remember…

KALTBLUT: Happy birthday?
Yael: [Laughs] No no, I think it was ‘Jolene’ or something. He told me, “Hey! I like your voice.” And I was like, “Thanks.” So we ended up doing something about it!

KALTBLUT: Is Tel Aviv’s musician scene quite small then?
Gil: Yeah, very. There are groups of genres. Like electronic people, folk people.

KALTBLUT: You do get a lot of electronic music from Tel Aviv
Yael: Yeah, absolutely everything. Like Berlin!

KALTBLUT: Yeah I mean, you guys have combined everything, you’ve even had people reference your sound similar to something from David Lynch
Yael: I did hear about that!
Gil: I mean, I wouldn’t say we aimed to sound like that, but we love soundtracks and we love the atmosphere…
Yael: The cinematic atmosphere when you write a song where you can really imagine scenes. So I can understand why people might mention that.

KALTBLUT: It’s impressive to be able to envision a scene from a movie if you just close your eyes and listen to the music though
Gil: I think that almost every time we write a song, or when we produce it, we just picture the people there who see us perform.
Yael: We think about the feelings, the scene and the landscape.

KALTBLUT: Is that how you also use the landscape in Tel Aviv?
Yael: Sometimes I write about the daily life. I was a waitress so I saw lots of types of human beings, for 10 years! I also did music on the side too, but you have to, especially if you’re a musician and you’re very new.

KALTBLUT: Well now with the help of social media, artists can be heard even quicker, like you guys having over a million hits on Spotify
Gil: It was great!
Yael: It’s a great thing, we just talked about it. In like the 60s people wanted to share their music with the world and it was tough, they needed to be in the place, but now you just click and it’s there. You can be in China, Australia, they hear you. It’s fantastic. Of course you always need to be in touch on like Facebook.

KALTBLUT: At the same music can get lost so easily online
Gil: But you know, sometimes something will just pop up and you can follow the band or the artist. It happens all the time for me.

KALTBLUT: It’s kind of different to how you were found at Primavera for the first time
Gil: Yeah that was our first show out of Israel, it was two years ago so we were really overwhelmed! I think we had like only 5 shows before with the whole band.
Yael: I think maybe less! We just found the band, as we were a duo for one and a half years.
Gil: We released the first single ‘Sirens’ I think maybe 8 months ago, then it went viral and it was incredible. I wouldn’t imagine it!
Yael: After Primavera we did some cool festivals too, we did Pohoda in Slovakia where we’re going back to again, we played just before Björk! And the year before we performed before Tame Impala. We met them too, they’re so cool.

KALTBLUT: I love that artists still get starstruck
Yael: Oh yeah, I love them! I have done for a long time.

KALTBLUT: So how have you found Germany responding to your music so far?
Gil: Pretty good! I mean we are touring now and the crowds have been great.
Yael: Yeah, they’ve really been with us in the moment.
Gil: We love Berlin also, it’s very green and everyone has been so friendly.
Yael: I keep getting lost! I forget how big the place is. Tel Aviv is so small.

KALTBLUT: I always thought it was quite big!
Gil: I think it’s because it’s a great city! You have a lot of things, whatever you want. You have dance clubs, shows, really amazing food, the beach and amazing weather.
Yael: Amazing food. You should visit!

KALTBLUT: What’s the signature dish I should get?
Gil: Ah, tahina, of course.
Yael: We have some with us!

KALTBLUT: My fave! So I was stalking your Twitter account, as you do, and saw you’re doing a song for a soundtrack is that right?
Gil: We did a collaboration with Brian Tyler and Keith Power.
Yael: They write music for huge films, like a lot of epic action movies, and at some point they got to hear us and wanted to write a song together for “something”. I almost said it!
Gil: So we wrote the song together over emails and they produced it and it came out really well.

KALTBLUT: That’s crazy, did you meet in person at all?
Gil: We talked like once! Everything was over email. But it was really great because we spoke with them in France, just after meeting with Universal, and we were speaking to them on the phone in America and it was just so surreal!
Yael: Yeah, we are in Paris, we just got out of signing and we’re talking with Americans about a Hollywood movie. So strange. Literally right outside of the Louvre.

KALTBLUT: When you’re secretly thinking “Yessss!”
Gil: [Laughs] We just thought how small the world is!

‘You’re Mine’ EP is out now on Anova Music