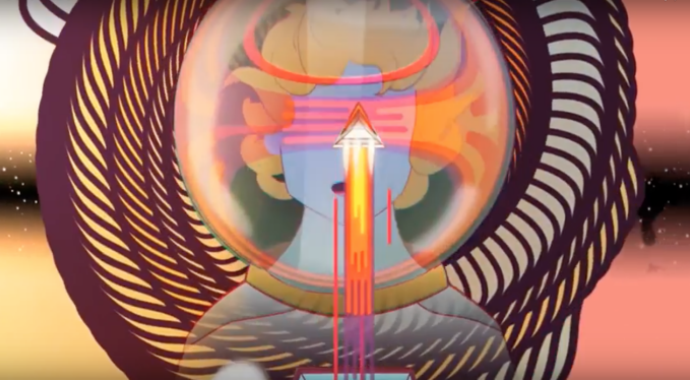 To round off this week we’ve got our Top 5 videos for your viewing pleasure, including new entries from some solid KALTBLUT approved names, to visuals from new faces in some unique crossovers between music and film. Get set for a trippy, funny, and at times even emotional rollercoaster of surreal and striking visuals, from some of the fastest rising acts in alternative music. Enjoy!

In a kinky nod to the nostalgic era of videotapes, Hot Flash Heat Wave’s  absurd and comical short switches between the group tripping out on a wave of white noise and acid purple, to getting sucked in by their own television sets. A nicely fitting and bonkers creation to their alt rock indie sound.

Straying even further down the rabbit hole, Corbu’s animated and dreamy visuals are tailor made for their track ‘Battles’, which sails off on a journey to whole other planet. Daniel Corderro’s vision is brought to life in five minutes of sheer ectsasy, illuminated by the track’s euphoric vocals. Not to mention it is stunning to look at, with every frame a complete and utter mindfuck.

Established indie house duo Set Mo are among the list of unique and captivating offerings today, with their video for new single ‘Comfort You’. Reflecting the meanings and ideas of the track itself, the video explores themes of friendship, relationships, and the pain and joy of being young. Alternating between sun dappled landscapes to dark silhouettes, this is an unexpectedly profound visual to a classic midsummer tune.

Taking us back to the 80s this week, Suns dropped a new video to their track Catalyse, which at first glance is reminiscent of a moodier, darker, and more alternative tribute to the glory days of A-Ha. In the spirit of true electro-dance pop, the duo are captured singing and playing their hearts out to the camera, and busting out some pretty strong moves as the synth sound electrifies the stage around them. A big fat guilty pleasure, the camerawork takes you straight back to MTV and the pure visual energy of dance music.

For the final film we have something quite unique, starring one of the biggest names in the film industry. Directed by acclaimed artist JR, Ellis tells the original story of the ‘migrant’ as we came to recognise it today. Starring Robert De Niro, the film winds its way through the crumbling hallways of the abandoned Ellis Island hospital complex, now home to JR’s Unframed art installation. It’s a place that reverberates with the hopes and fears of those who passed through it, the echoes especially resonant today. Entwined with the narrative is a score composed by Woodkid, performed and co-written by Nils Frahm. There’s perhaps never been a more fitting time for this story, with all the proceeds going to the Sea Watch initiative, a non-profit charity dedicated to the protection and rescue of civilian refugees. Intense, and well worth a watch.