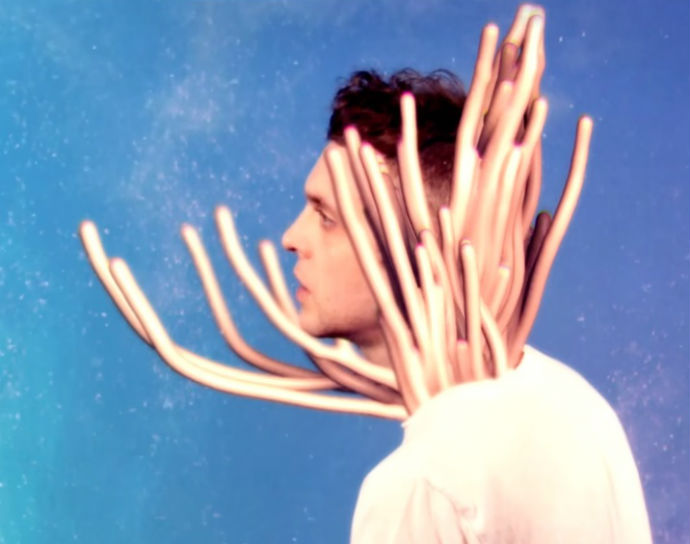 Another week, another glorious selection of videos selected from the interweb to keep you entertained! Delve into the anxious mind of Sin Fang, dance through the night to MSTRKRFT, disco away with Mary Ocher + Your Government, take a ride with Metronomy and tantalise your senses with Masayoshi Fujita & Jan Jelinek.


Sin Fang premiered the video for ‘Candyland’ featuring Jónsi earlier this week, the first song taken from his upcoming album ‘Spaceland’. Taking a cue from the main lyrical theme of the album – “self-therapy after having panic attacks” – director Ingibjörg Birgisdóttir is working with abstract interpretations of the physical effects that anxiety can produce – and puts them in a virtual candy environment. ‘Spaceland’ will be released in September via Morr Music.
@SinFang


MSTRKRFT recently announced ‘Operator’, their first new album since 2009’s epic ‘Fist of God’. After releasing ‘Party Line’ and ‘Little Red Hen,’ the duo have shared the video for a new song, ‘Runaway.’ The Brooks Reynolds-directed visual features a sleep-dancing man as he makes his way through the night. Operator is out July 22 via Last Gang.
@MSTRKRFT


Design mastermind Yeorg Kronnagel creates glittered-covered characters for the retro-futuristic clip of ‘A New Language’. Directed by fashion photographer Laure Cherrygrove, the video appears nearly six months after the release of album ‘Mary Ocher + Your Government’. Jammed full of B Movie inspired outfits, environments and even a vast array of wigs, ‘A New Language’ is a sure synth-pop classic. The Mary Ocher + Your Government self-titled release on Klangbad is Mary’s fourth full-length release (and first with her drummer duo). Ocher’s new album is still in the works and will be recorded with Hans Joachim Irmler of Faust at the Faust studio in Southern Germany.
@MaryOcher


After the recent release of ‘Summer 08’, Metronomy drops a rather confusing new video for ‘Night Owl’. Quentin Dupieux, better known to most of us as the French dance producer Mr. Oizo, directed the video, and it’s a surreal and absorbing thing. The clip takes place against the desolate majesty of the American desert, and it features a grim reaper, a self-driving Rolls Royce, a few murders, and a human brain that scuttles across the ground like a bug. Good luck making sense of it, but it makes for some compelling viewing. ‘Summer 08’ is out now via Because Music.
@Metronomy


Captured through a series of reflections, ‘Vague, Yet’ reveals a quirky, alternative window into a more magical view of the glass and steel environment. Filmed by Anthony Sylvester, the clip was created for vibraphone virtuoso Masayoshi Fujita & experimental producer Jan Jelinek who will be releasing their follow up to their debut ‘Bird, Lake, Objects which was released back in 2010. On their new album ‘Schaum’, Masayoshi Fujita prepares his instrument with various percussion elements as well as metal objects and toys, while Jan Jelinek layers loops made using small-scale electronic devices. ‘Vague, yet’ is taken from the album ‘Schaum’, to be released September 9th.
@MasayoshiFujita
Start typing to see results or hit ESC to close
menswear Berlin boys Womenswear kaltblut
See all results