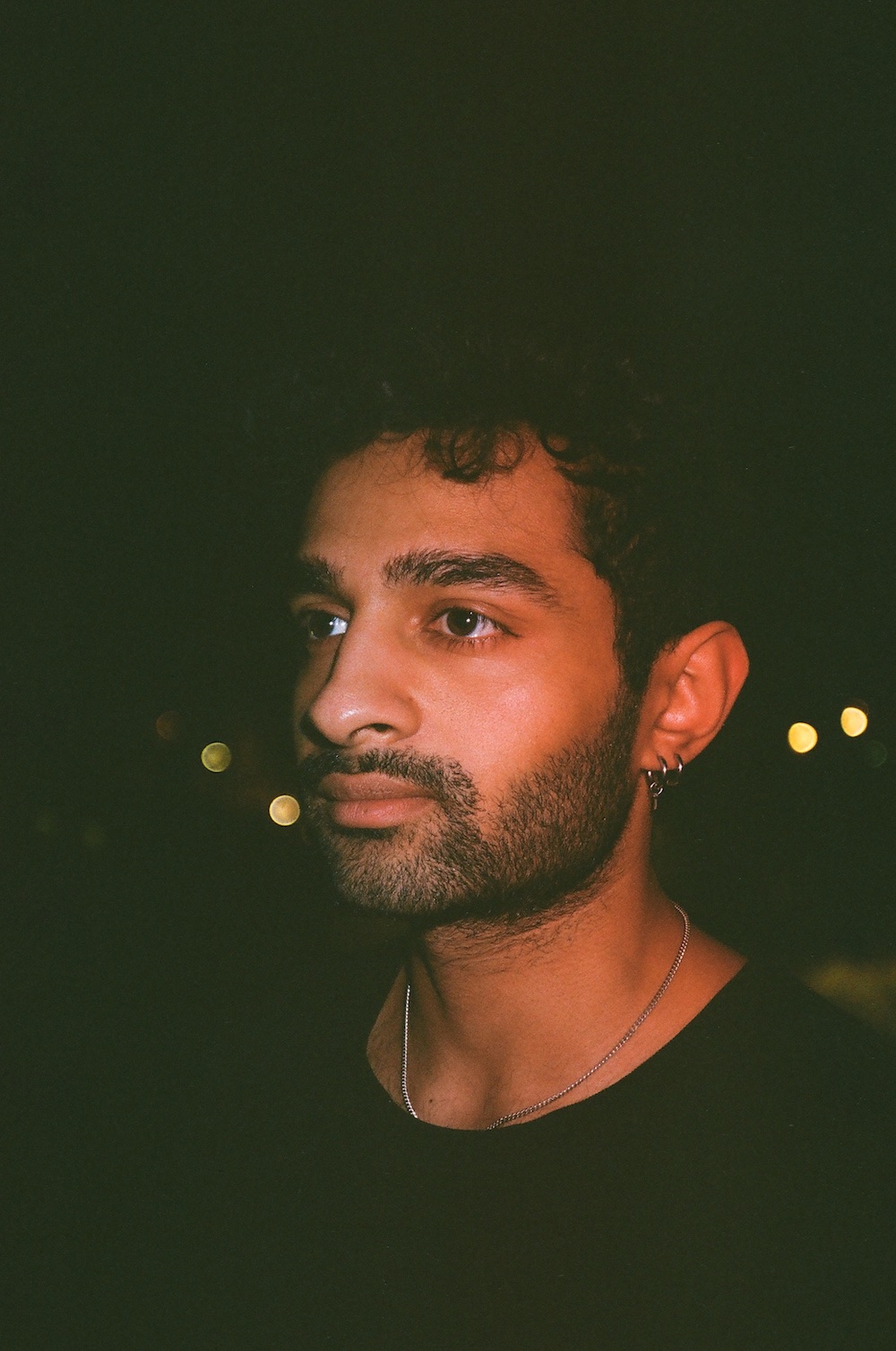 Fresh from being listed as one of Gilles Peterson’s ‘Future Bubblers’ under Brownswood Music, Michael Diamond released his concept album Third Culture – an LP backed by Youth Music & Arts Council England exploring the concept of cultural identity – this June. Hailing from Kerala, India and now based at Oxford University (where he holds a music scholarship), Michael is a third culture kid i.e. someone who was raised in a culture other than that of their parents. Expressing conflicted thoughts through a period of inward battles with identity, the album is accompanied by a short story by writer Áine Kim Kennedy. Áine (a close friend of Michael’s) is also a third culture kid of Irish and Korean heritage whose perspective on culture, religion, spirituality and nationalism has been shaped by both her personal family experiences and her academic specialisation in partition.

Michael takes us through the thought processes when making Third Culture, alongside Áine as she links the music to her short story that was inspired by Diamond’s earlier version of the album.

Chapter 1 – Genesis
The beginning of the story.
Michael: “I wanted the album to start off quite sparse, isolated, cold and cinematic. Alex Wilson did a lot of the composition with me on this. He took apart the ideas in Enigma (the next track), decomposed them and used multiple layers of clarinet and sax to create long harmonies. The soprano sax mirrors the floating, improvisatory synth lines in Enigma, but also allows Alex to use all sorts of techniques to bend notes and timbres, making it sound really human and vulnerable. To me, it feels like the sax seems to ask questions, without receiving any answers. Thunderous bass explosions disrupt Alex’s lines – intended as a signal of what’s to come….”
Áine: “The sax opening does so much to create this sense of a different world, something familiar but unreachable, especially having been recorded live; it’s such a marked contrast to the more electronic textures that are to come that I took it as the basis for the story’s sense of not knowing what ‘reality’ truly is. It really set the scene for this jazz aspect which I think of as deeply rooted in Western musical tradition, and this broader 20th-century European culture – the first version of the concept of ‘home’ that we come across. It’s the feeling of being half-asleep, half in the past, half in the future, but not knowing quite where the memory could lead you.”

Chapter 2 – Enigma
A problem is encountered.
Michael: “Flowing on from Genesis, I aimed for this track to enter a deep and mysterious mood which isn’t too climactic. I wanted it to set up the rest of the album, introducing the sound palette of what is to become your world for the next half an hour. It centres around the drums and bass, with free-flowing synth lines overlying a repetitive melodic motif that swells up before dying back down again. This track (and throughout the album more generally) I feel there’s a symbiotic blend of organic and inorganic elements – Abigail Hodges used a similar approach when she created her art pieces for the album, using a combination of linocut and digital processing to achieve something that possesses qualities of both.”
Áine: “That really distinctive sound-world created in Genesis gets broken up by this much more fractured, glassy beat which really tied together the ideas of sleep and anxiety for me; that almost adrenaline jolt when the kick first enters, and the sounds that pan around like something scuttling around your head. Obviously, it’s a much more electronic texture than that really rich, buttery, nostalgic sax which seemed like a great representation of how another form of ‘reality’ – ie. the modern world – might intrude into a mental dreamscape. I think everyone’s had that feeling when they’re about to fall asleep and suddenly remember something that happened at work that day, or an email they didn’t send, or a risky text, and just get jolted into this animalistic but very 21st-century fight or flight mode. This is what this track feels like to me.”

Chapter 3 – Lamentations
An outcry
Michael: “It grows from a very barren place, with downcast keys which gradually intensify towards a breaksy full-frequency climax. The lead synth almost sounds like screaming to me (hence the name). At the end of the track you are sucked ‘underneath’, taking us into the underwater world of the next track Submerged. This is the track that Oscar McNab decided to use for his film, his visual interpretation of Áine’s short story.
Áine: “This was the next really distinctive texture that I heard as a voice, or really a character, in the album; the textures in the earlier parts are more ambient, more constructed, in a way that recalled fragments or glimpses of another world, whereas the melody here is so distinctive and wordlessly vocal, that it had to have come from something within the protagonist.”

Chapter 4 – Submerged
Immersed in the sea of introspection.
Michael: “I wanted to create something which sounds like you’re underwater, deep in contemplation. It’s quite a sorrowful track to me, meant to be the thick of the album. I think the track’s 6-bar phrasing makes for an interesting musical metre and feel. The bass almost sounds like it turns in on itself (a simple LFO on the pitch), which I think really captures that sub-aquatic feeling.
Áine: “So now that you’ve had all these different worlds and voices introduced, and sort of building to this conflict with each other, this track has a real sense of broken boundaries; you can hear all these aural signifiers that again are familiar from the past, but now on top of each other, out of context, they start to lose meaning. But its pace, variety and textural richness are so lush and dazzling that it’s quite seductive, which again is a familiar experience to anyone who’s had a really weird but memorable dream.”

Chapter 5 – Emergence
Breaking through.
Michael: “Arguably the climax of the album. Taking us from where the preceding track leaves us, The intro builds from the bassline of submerged, which rises to full impaction and then explodes. You break free from the problem that’s been haunting you, you have your ‘eureka moment’ so to speak. Afterwards, I’d say this track becomes more hopeful, but it’s not necessarily a happy track. There are flecks of jazz, and hints of the sax from Genesis (albeit short-lived) – foreshadowing the return of the sax in liberation. Its second section descends into something more aggressive and gritty, again setting up what’s to come in Exodus and Liberation. From what I’ve gathered, this is possibly people’s favourite track off the album.
Áine: “Here I felt you can hear all those pieces which were coming together in the previous track start to drift apart again; the timing works so well in that the big kaleidoscope of imagery and references run just long enough to start fraying, just as it would if you’d stayed in a dream for too long knowing that you were really half awake. And again the physicality of all the drops really seem to reflect those huge jolts between states of consciousness that seem totally implausible once you’ve woken up but are completely real at the time.”

Chapter 6 – Exodus
The battle.
Michael: “If this were a film, this would be the fight scene. Victory is almost in sight. Therefore, it was intended to be more energetic, perhaps even club-ready. The intro starts with the same randomly-timed white noise crackles as in the previous track which start to settle into a groove, building from apparent randomness. This is almost the end of the album, the end of the journey – and I guess I tried to capture what that would sound like to me. Towards the end, the drums mutate and fracture and the track ends abruptly.”
Áine: “This I thought brought all these different versions of reality into comparison with each other: we’ve heard them each individually, we’ve heard them together, we’ve been kind of passively carried between them because each seems physically the most convincing at one time or another. Which is a pretty good summation of growing up in a multicultural background. This track again lurching into this physicality, the very anxious, driven sense of attempting to resolve it neatly, evoked the reactivity which I think is quite common in both anxiety spirals, nightmares, and broader emotional trajectories: trying to fight fire with fire.”

Chapter 7 – Liberation
The final release.
Michael: “Alex’ flute and sax return once more, this time with more to say than the little cameo in Emergence. There is a new sense of freedom in the lines delivered, having finally found the answers to the questions asked in Genesis. Throughout you will hear melodic and harmonic references to the rest of the album – an auditory reminder of the journey you’ve just been on, albeit viewed through a different lens this time. The grit of the fractured drums provide a nice contrast to the smoothness of the harmonic elements. I wanted to create a blend of affliction and fulfilment, of freedom and what it takes to achieve freedom.”
Áine: “Then the conclusion to the whole thing was done really beautifully, which I think comes from that jazz modality, let’s say that snippet of ‘old-fashioned’ European culture which is unlike classical cadences (or a lot of pop) in terms of not demanding a clear, singular resolution; it gives the whole thing the flexibility, the ambiguity, to integrate a lot of contradictory potential, which is exactly what I wanted for the protagonist.”

Third Culture is out now: michaeldiamond.bandcamp.com/album/third-culture-lp