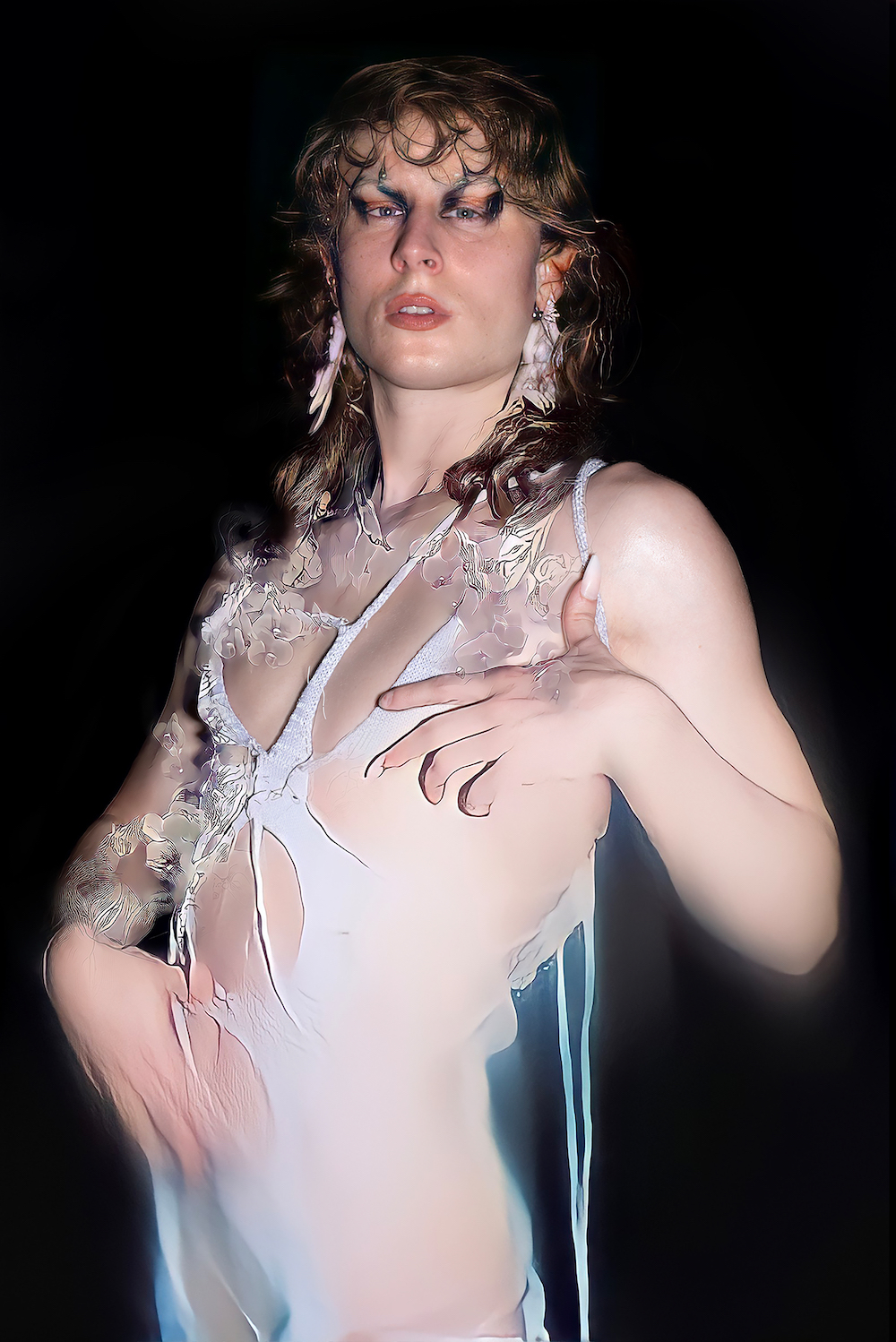 Bristol’s Sarahsson is a force to behold. A composer, producer, performance artist and DJ, her intricate work is a visceral expression of divine queerness and her experience with synaesthesia. Originally hailing from Exeter, when she moved to London she discovered a queer community that hadn’t been present in her hometown and so began to explore the rejection of genres and the dissolution of gender. Drained by the male dominance in electronic music, Sarahsson’s first forays into more experimental sounds and parties helped direct her own personal journey—exploring the feminine, synaesthesia and blurring the lines between binaries.

Inspired as much by the natural world as she is by gore and harsh noise, Sarahsson fuses elements of classical music with metal, experimental electronics and hardcore. Her debut LP The Horgenaith explores themes which Sarahsson equates with queerness: “Transmutation, embodying contradicting parts of oneself,” she says. “Finding familiarity in difference is a lot of what queerness is about for me”. A multi-dimensional commentary on “femininity’s cultural proximity throughout history to nature and rediscovering the body as a landscape, its constant state of flux and transience.” We asked Sarahsson to take us through her stunning debut, track by track.

Track 1, Ancient Dildo Intro
“The Horgenaith is a colossal thurse, a many-necked beast thrashing and lamenting and wrought of iron and clay, leather and moss, organ pipes and bellows. My habit when making music seems to be to make very slow introductions, building from nothing and gently materialising ambiguous sounds which become melodic, so I actively wanted to work against that to open my first release. Finished in less than a day, the lyrics ‘Tar, stone, wood, bone, ivory, limestone, teeth’ are taken from a wikipedia article about early human sex toys and so, aptly, every sound except the piano and birdsong has come from my mouth.”

Track 2, Tonsil Pearls
“This story begins after crying so much about transness, our social and political situations, the internal struggles we face, the family we’ve lost, it’s so much grief to bear, and eventually the salt from my tears crystallises and forms a chrysalis. In there, my blood begins to sing and scream to transcend my primitive tongue (which is what inspired the many different and layered processed vocals) and I learn that this burden of tragedy actually belongs to our oppressors, and that I am an infinite wellspring of love and transformation energy. The real changes I’ve experienced in the past five years, unlearning internalised queerphobias, navigating new relationship models, chemical and structural changes while I was able to take hormones, are reimagined as alchemical transmutations, painful and grotesque, where coral ribs burst from my chest and my nerves are stripped and replaced with fungal threads, my mouth folds into an oyster, my perineum splits into a flower, and I become something divine and ever-changing. I strived for nearly a year to complete Tonsil Pearls, I wanted the melodies to stand very powerful in their softness within the chaos of these crashing machinery recordings and strobing textures to create this very elegant crisis, a tender apocalypse.”

Track 3, Lacing The Well
“Here I imagined a little soundtrack moment in between two of the narrative pieces where, having transformed, me and the dolls go to lace the drinking well with this trans-chrysalis-amniotic-fluid to cause some cute magickal havoc and make everyone queer haha. I recorded it on an antique autoharp which I found in Newlyn, Cornwall but was too old to tune without breaking so I found some comfort in this new scale.”

Track 4, I Am The Earth
“A lot of the themes present in the album come from a range of folklore sources; there are biblical quotes, lines from greek mythologies, imagery from the Mabinogion, so I wanted to embrace a more classically folk-music sound with the melodeon drone and this simple vocal polyphony (comprised of almost forty layered recordings). Once everyone has imbibed this transmutational goo our bodies collapse into one and many and we rediscover ourself/ves as a landscape, comprised of many disparate organisms, non-essentialist and eternally ephemeral (imagine a folk-horror End of Evangelion retelling the Norse creation myth of Ymir). My boyfriend and I had a short-lived obsession with collecting cowbells and they seemed to fit well.”

Track 5, Perennium (Reprise)
“Perennium was the first track I made for myself as Sarahsson, it’s actually a breakup song about feeling ungrateful, but the reprise embodies something else. I’ve been playing the piano for more than twenty years and repeatedly stagnate, for some reason drawn to relentless repetition, so have tried exploring new ways of playing with improvisation (which has always terrified me). Granular synthesis conjures a really beautiful texture with piano recordings and layered with this messy style, rejecting my institutionalised background, as well as ghostly feedback artefacts and the ringing of a finger on a wet wine glass, I finally meet unfamiliarity. But soon it floats into an endlessly swirling baroque arpeggio and I dramatically destroy the piano, mirroring my own destruction and we’re together sucked into nothingness. Honestly too dramatic.”

Track 6, Orchidectomy
“I had made a very basic 128bpm electro-bro track and wanted to cut it up and castrate it. She looked in the mirror and said ‘ooh’, certified cunt.”

Track 7, A Selfish Tryst
“Composed from a combination of harmonised horn sketches and drenched in reverb , it’s a very pretty little piece . There’s not much more to it , I’m just very enamoured of this sound.”

Track 8, Swallow
“Although my initial intentions behind making the Daxophone were largely to do with trans metaphors, actualisation and submitting to the unknown, I also was really excited to make something super intense and unforgiving. My boyfriend, a papier-mâché bard by the name of Buoys Buoys Buoys, had written a salt-flecked and rotten-sweat-soaked vorarephilia poem recounting and mingling the stories of James Bartley, a nineteenth-century sailor who supposedly survived a whale’s belly with his skin bleached white by its stomach acid, Jonah and the Whale, the Rime of the Ancient Mariner, Moby Dick and even parts from Twenty Thousand Leagues Under the Sea. Even whilst Jemima Coulter and I were still building the Daxophone, its throaty wailing perfectly and simultaneously embodied the whale, a foghorn and the disorienting tempestuous white-out during which the narrator’s captor becomes a benevolent protector and provides and safe haven in its sloppy gutty wutty (If you listen closely there are even several slowed-down burps to add some ‘viscera’).”

Track 9, Cladonia Hymnal
“What began as a love song to my first t4t partner about a dream I’d had is now reincarnated as a thank you to him and a love song to transness. The lyrics are very sensual, it’s about breathing from and into each other and collapsing the outside-inside manifold of the protective body so we can sleep inside one another, in a nacre-lined jewel core, all whilst lichens sprout from under each other’s touch. The stretched out choral harmonies rippling with distortion over this warm expansive bass is another sound keep returning to, it feels so poignant yet joyous and hyper-emotional. Hearing the music box is very nostalgic too as I built the sound font from recordings of a music box I’ve had since I was about two, and I’ve hidden some melodies from older pieces in amongst the final arpeggios because I really wanted it to feel like this huge epic film ending filled with memories and hopes all compressing together at the hypocentre – a perfect way to close an era.”