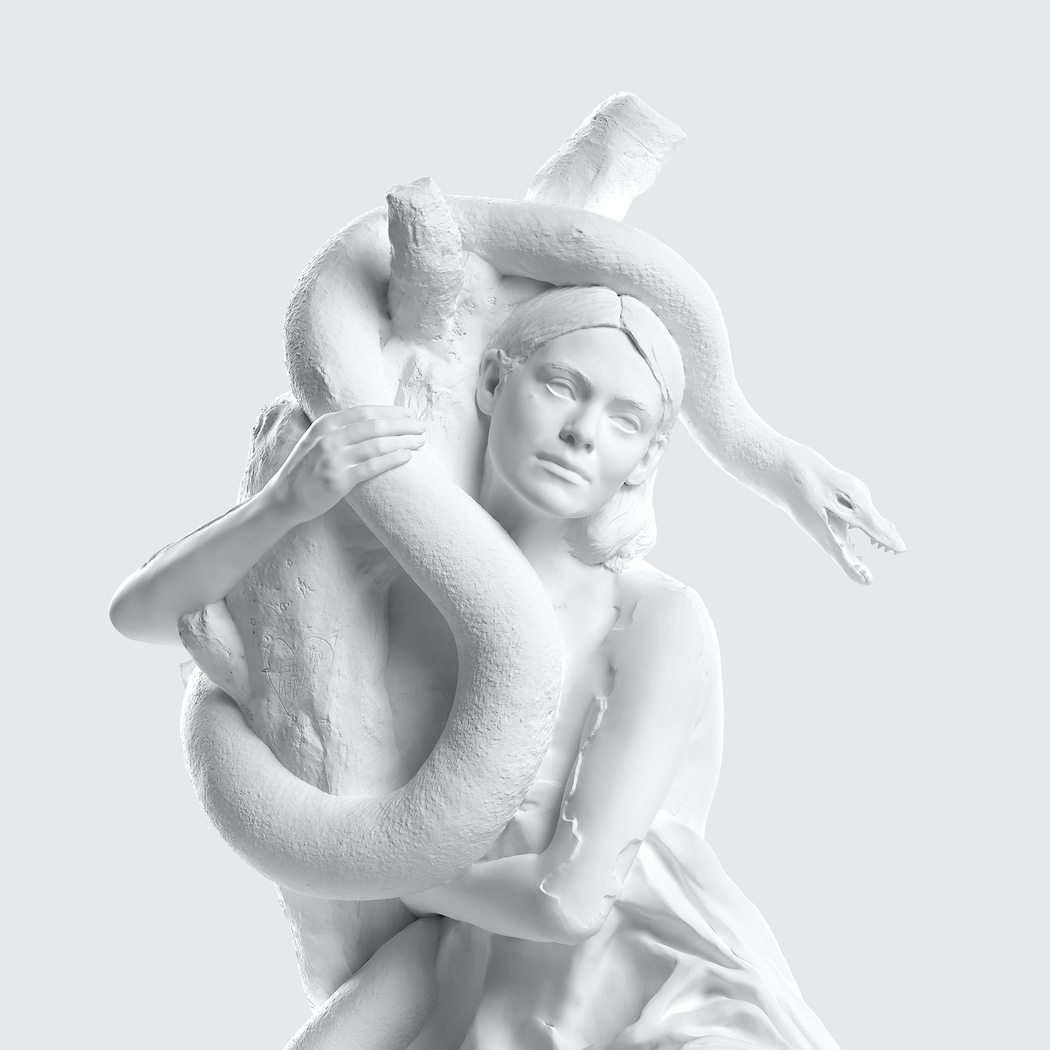 Artist/producer Uffie has collaborated with British visual artist Jam Sutton to create a sculptural augmented reality audio project with the new single ‘Ego’, available to explore today on the Jam Sutton Studio app. Known for his diverse body of work ranging from art, fashion (“This Is Not Clothing”), still and moving image (collaborations with Pharrell, Azealia Banks, Steve Aoki), museum exhibited artist Jam Sutton explores human form in the technological age. Harnessing the potential of digital techniques, Jam creates artwork that draws reference to classical ideologies and aesthetics of the past. The collaboration between Uffie and Jam began as a sculptural art piece exploring Carl Jung’s theory of shadow, self, and ego. The project has resulted in the creation of a marble sculpture (available for limited sale), an audio soundtrack by Uffie (co-written with Ariel Pink), and an augmented reality app that brings the audio and visual together to explore the many layers of consciousness within the psyche. The resulting piece is a hypnotic experimental audio visual experience.

Inspired by Carl Jung’s theory on shadow psychology, the sculpture depicts a hyper realistic Uffie in an embrace with a mythical serpent. Throughout history the symbol of a serpent represents duality of good and evil. Carl Jung’s concept of the ‘Shadow’ emphasizes this. In his theory, at an early age we are conditioned to what is ‘good’ and ‘evil’ by our early experiences. According to Jung, everyone has a ‘shadow’, the unconscious side of ourselves where negative (and sometimes positive) personality traits are kept. ‘Ego, Self and Shadow’ are Jung’s components of ourselves, the Ego is where our consciousness resides, our sense of identity. The self, according to Jung is the complete potential of the psyche looking forward and striving for wholeness. And the shadow is the negative personality traits we choose to ignore. Depending on how light hits a subject; the shadow can be dense or insignificant. Finding a balance of the Ego, Self and Shadow is a goal Jung explored to reach personal wholeness.

The sculpture has three component parts; the front portrays the Ego embracing a serpent, representing duality. The reverse of the sculpture features a second face looking to the past, representing the unconscious shadow of our psyche. The sculpture can be explored in 3D alongside the soundtrack by Uffie using an Augmented Reality app. Download the ‘Jam Sutton Studio’ app on the Apple App Store & Google Play. Once installed open the app and select ‘Start’. You will now see the camera view from your device. Slowly move your camera over a floor or surface, then select the tick icon to place the sculpture in the environment. You can now walk around the sculpture and listen to the soundtrack created for the piece.

The artwork is available as a limited edition sculpture made from Carrara marble on jamsutton.com

‘Ego’ by Uffie is available to stream on Apple Music & Spotify