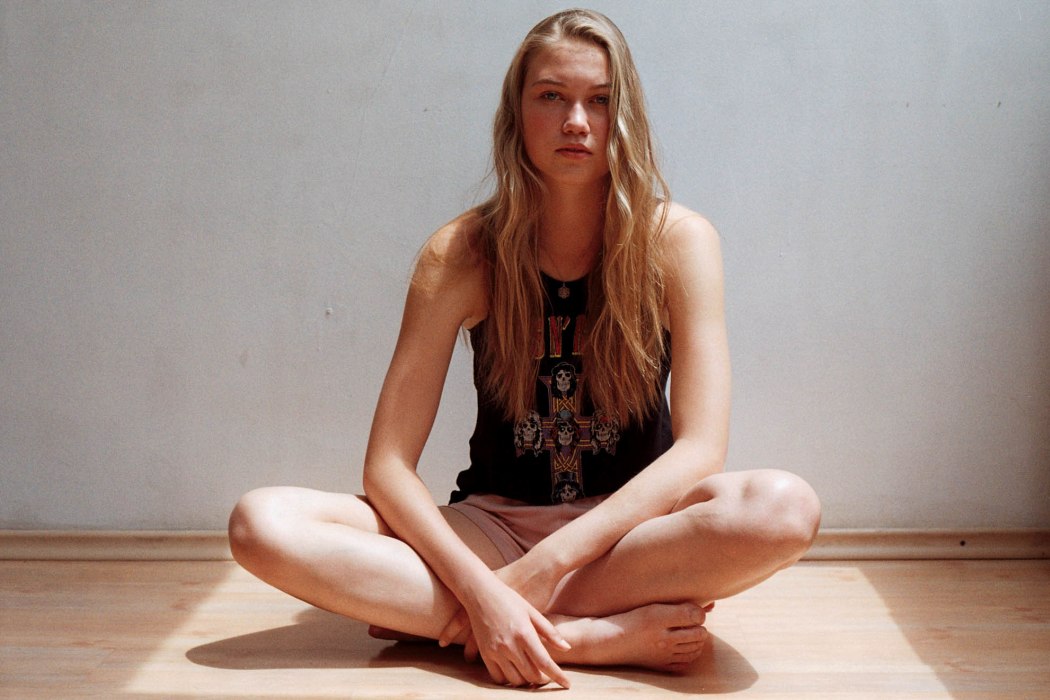 Exclusively for KALTBLUT Bulgarian photographer Lyubomir Ignatov spoke to and shot the beautiful gymnast Katerina. She is barely 18, yet while training for the Olympics, she has already sustained training injuries that could have her pinned to a wheel chair in her 40s. “I could write a lot for this series, but maybe my idea is that society always ruins the life of the young for their “greater” purpose.”

“I made her speak her mind with a little help. This series is a private view of her life and a lot of mine. There are a lot of subliminal messages in the photos that will probably stay between her and me. We both  love Pink Floyd, 1980 is the year when The Wall came out, the socks are a way of telling that she is still a child, аnd much more… the red colors are giving us the sense of our communist past.
Laurent Ziegler ( unstill.net ) helped me choose half of the photos, but I still included some of mine, so this is like a mix of the photos that he and me liked. He is one of the people who is  motivating me to go further, despite my self doubt. The order of the photos is chaos.
P.S. I shot 2 rolls of film for the series because its 72 shots and 7 and 2 are the lowest cards in poker but 7+2=9 and 9 is my birth date and 9 is the last number and a very important number…”

These are her words:
Unsocial kid growing up slowly & sensibly.
Raised actually without a father but with a strict demanding mother. But most importantly, she grew up to be a human. ( When you lose something then you gain something more useful & important; so she gained some human qualities that are lacking in the modern amoral “biting” society.) Raised in a small industrial town with backwash from testing weapons on region territory when the Soviet Union existed, like in a cage with the illusion that you are safe cause you are literally locked there. Raised under a strict mother’s wing and communist post – Soviet mores.
Moving from Kazakhstan to Bulgaria, frustration from broken down intrusive ideas of two totally different mentalities. Feeling “cast” in a stream of a soulless condemning crowd. Silently she protested society throug poetry.

From the age of 15 she has been living without her parents and is now trying to take her place in society but it looks like all places have been taken. Her Olympic future in rhythmic gymnastics has been ruined by irredeemable injuries after 1 year of hard training. Culture clash, the teammates envy, self closure, the moral pain she turns, the physical pain, understanding that she’s no longer able to make her main life goal come true, feeling useless and helpless. Currently she’s trying to start life anew.

The unknown future. She’s growing up slowly. But she is. Maybe she needs to be a woman, but it’s not the time yet. A rude world must let her realize it.