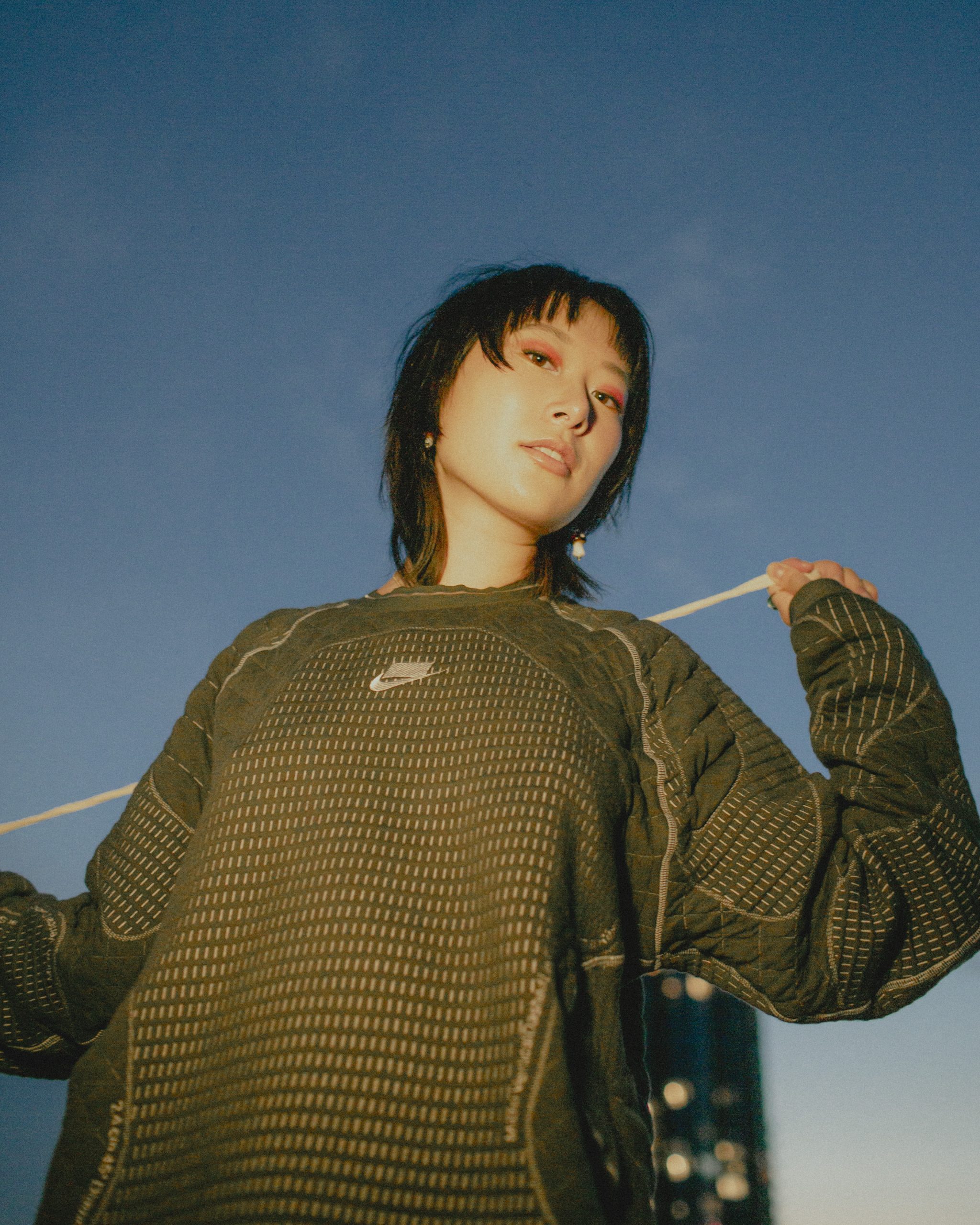 Caro Juna shares the video for “Unalone”, the second single from her upcoming EP Violent Delights. With roots in Japan and Korea, the Brooklyn-based artist explores her many identities through floating vocals, reflective lyrics, and gentle chords. Her music carries a wide range of influences spanning from her background in playing classical piano, her cultivated love for jazz and futuristic electronic sounds made on a computer. This reflects in Caro’s first fully self-produced EP, which is an experimental take on sentimental music in a digital age. Through this fresh and honest lens, Caro hopes that others will intimately relate to her on her journey of self-discovery. Her EP Violent Delights will be released tomorrow, 16th of April.

Caro Juna made a statement about how her single and EP are about her life and artistry as an Asian American and how she’s feeling about the recent state of things:

“As an Asian American artist, I’ve often wondered what my place was in an industry that didn’t seem to favour faces like mine. Through years of social conditioning, I learned to cater to the people around me, to make myself smaller to accommodate and appease others. With the rapidly shifting social climate spurred by the pandemic and public outcry over devastating racially motivated incidents, I was inspired to shed and unlearn any attitude of self-doubt and insecurity. I feel empowered to create music that was entirely my own from start to finish with no boundaries or limitations. In “Unalone”, I write about learning how to “turn my muscle into stone”, reminding myself to always “look both ways before crossing”, and that by “tieing my shadow to your feet”, my trauma ultimately follows me everywhere. Ultimately, my entire EP is a love letter not only to my younger self but to all Asian women who are learning to love themselves in a world that tells them they are lesser than.

Given the recent attacks on Asians, especially Asian women, the need for social and cultural change seems more and more imperative. It’s increasingly obvious that there is a need not just for more representation in the media, but more of the right kind of representation. So much of the media imagery of Asian women up until now has involved insulting and dangerous stereotypes that promote fetishisation and racism, and perhaps celebrating more empowered, graceful portrayals of Asian women might be a good place to start.“

KALTBLUT: What can you tell me about the EP, and the first single you shared, “Maybe”?

Caro: Up until this EP, I had worked with a lot of different types of producers. But, as soon as the pandemic started, I was sort of in this mindset of wanting to make music that feels entirely my own. And I think as a woman, I realised I have this tendency of really wanting it if I see that there are not many women doing it. For example, I love boxing. And one of the reasons I thought about trying boxing was because I hated the fact that only men felt like they could do it. And I felt that exact way about producing. I believe that women are just so empowered and strong. In New York, there’s a huge amount of up and coming female producers, and I wanted to be a part of that. But,  there still aren’t that many yet. Especially Asian women. I can select a few people and it just made me so sad that you could count that number on one hand. So, the pandemic, I guess, in a way, was kind of a blessing in disguise, because I wasn’t going anywhere.

So this EP is the culmination of many months of practice and learning. And also  compared to my older stuff, that this EP is a little bit darker. Because of the pandemic forcing me to grow up very quickly. I felt like there was just this general feeling of, how do I find a reason to continue moving forward, when everything has come to like a standstill?

The single is actually about my parents. I have a bit of a contentious relationship with them, and probably many Asian immigrant children would relate to that. I come from a family of doctors, so me choosing a career path that wasn’t like something they understood was just totally new to them. And when I told them I wanted to try this music thing and I don’t want to hide it with my family to be proud of it as well. I think just in general, they don’t have the best opinion of it. We’ve had a lot of arguments and a lot of harsh words exchanged. And for me, like in this song, I just wanted to, even if they don’t listen to it, I want them to know that I love them and that I am very aware of the sacrifices that they made for me. But, you know, at the end of the day I feel like they might not realise it, but I’m kind of achieving the dreams that they came to America for, the goal is for us to live whatever future we want.

Caro: Yeah, exactly. I think a lot of Asian parents really seek that. I think some of them feel like it’s just like a privilege to even survive, right? So they’re looking to, kind of keep their heads down and live a fruitful, but stable life. I feel like Asian immigrant children are looking to make a lot of noise and be unconventional and be bright. And  that’s what I feel like a lot. But then with parents that didn’t grow up in a generation that understands that, it feels like you’re betraying them and I feel like they take it very personally. My parents definitely did. I mean, it’s complicated, for sure, and  there’s no one solution, and everyone chooses to deal with it differently. But for me, at least, I just kind of stuck by it because music is my passion.

Sometimes I just imagine what the world would be like if we could just be whoever we want it to be and not have to attach our race, sexuality or gender, or any of these things.

KALTBLUT: What you touched on earlier brings me to my next question. You shared a really powerful statement after the Atlanta Shooting and the rise in Asian hate crimes in the US and worldwide. How well do you feel represented in the industry?

Caro: I mean, it’s really hard and in some ways also quite interesting. I’ve had to reach out to a lot of different people for whatever I’m doing musically, whether it’s for write-ups, music videos or collaborations. I  feel that in the industry, and this is not just music, a lot of people are made to kind of wear their identity, whether it’s their race, sexuality as sort of a marketing tool, like wear it like it’s a marketing ploy or something.

It’s hard, because at the end of the day, how great is it that it’s even a topic now, people actually realise the importance of diversity? But then, on the other hand, how much of it is truly genuine. I never know what’s right or wrong, because I’m so proud to be Asian, but I also want to be viewed as an artist that isn’t, you know, just Asian.

KALTBLUT: It’s almost like a vicious cycle of tokenism.

Caro: Exactly! Even women still have to do it. We have to remind ourselves that, it’s amazing that we’re even doing it, you know, doing the damn thing. It’s just so hard. Sometimes I just imagine what the world would be like if we could just be whoever we want it to be and not have to attach our race, sexuality or gender, or any of these things.

KALTBLUT: I wonder how long it’ll take until we reach that point. And when it comes to the pandemic, do you think you got to appreciate music a bit more? Because right now, when it comes to music, making music, listening to music, we kind of take the time to appreciate the quality of the music. Especially when it came to before the pandemic, musicians were just banging out track after track. Now that it’s been paused for a while, how does that feel from the producing side?

Caro: My friend John is the one who mixed and mastered my EP and he’s extremely talented. We were having this conversation about just how the pandemic affected our music-making and he was saying some of the artists that he works with, he feels like you can really tell during the pandemic who just loves music so much that they like found a way to like continue making it.

And the thing is, everything’s a choice. For some people music is like a platform for them to grow as a business, they want to grow their brand. And that’s totally cool too. They do things that I don’t even think to do and I’m amazed by them. But then other people really love music and literally can’t live without it. You can tell the difference between those people, because in the pandemic, you’re forced to do it all yourself from the comfort of your bedroom.

KALTBLUT: And you’re on your own with your thoughts a lot longer.

Caro: Exactly! You can do so much just on your laptop, you can create a whole masterpiece. People just forget the power of just your laptop, you don’t need all the tools and the gears, you can make something so beautiful, from like an hour of sitting there just playing around. And so I think I do look at music differently now. I mean, I’ve always respected producers, and I thought they were so amazing but now, I respect them on a new level. When I listen to music now I’m like, oh, wow, like, that’s a small detail that you might not notice otherwise but it completely changes the mood of the song.

KALTBLUT: You’ve self-released your latest EP “Violent Delights”. Did that give you more freedom to work at your own pace? How does that differ from releasing a label from the creative side?

Caro: I have a lot of friends who release via labels and a lot who are independent. One thing I’ve enjoyed about being independent is that I feel there are no rules. If I decide to sit on something for a little longer that’s okay. And I think that also makes me love music a bit more. If there’s a schedule and a budget and you have to get this out by this day, it just makes you kind of fall out of love. I love that I can just do music as a passion right now. I can make whatever I want to without anyone telling me that that’s a bad idea. Do you know what I mean? It’s like everything is coming out of my brain, which I think is very empowering. Also, just as a woman, I feel like I have more agency compared to other cases where I was being told what to do. So yeah, that’s what I love. I love being independent for that reason, actually.