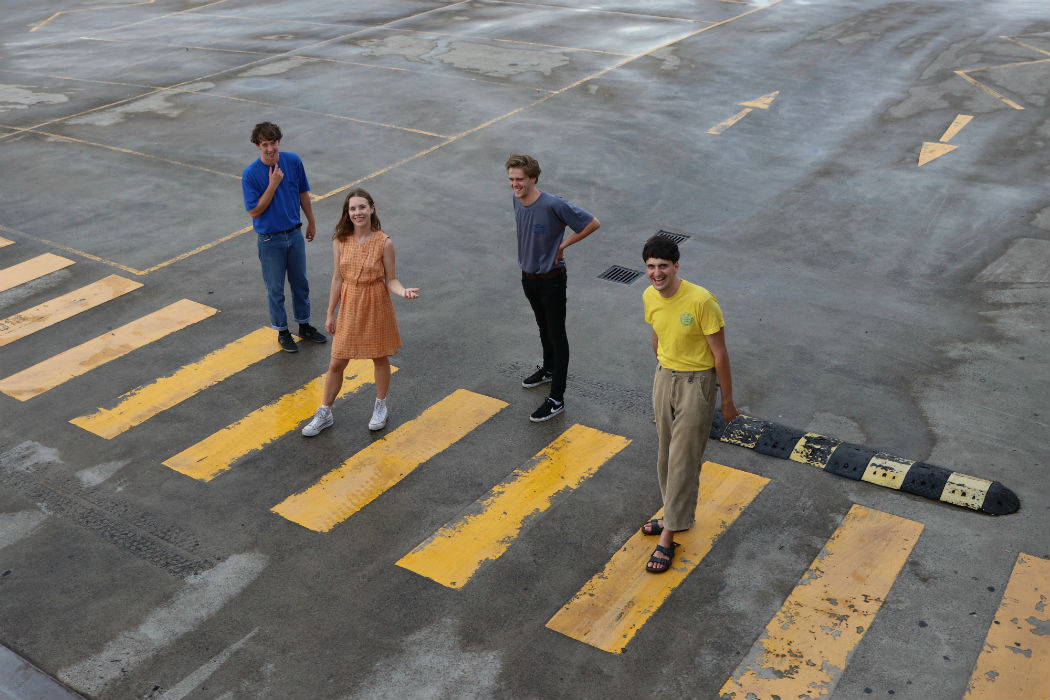 Without dipping a toe in trepidation, but rather jumping headfirst into the deep end, Flowertruck splash around in the nostalgic, technicolour, sonic joy in single ‘Enough For Now’ alongside the announcement of their debut LP Mostly Sunny, out March 16 and an April headline tour. Known for their upbeat melodies decorated with hooky guitar runs and vocalist Charles Rushforth’s quintessential Aussie twang, ‘Enough For Now’ is everything fans have come to love from Sydney’s Inner West sweethearts. A sun-drenched track – swirling with synth and melancholy lyrics – are complimented perfectly by fuzzy, early 90’s inspired visuals. “The video for Enough For Now was a collaborative effort between the band and dear friend Courtney Brookes,” explains lead Rushforth, “We’re all in our mid-twenties, time and cash poor, so we’ve all had moments when “Good Enough” is close enough. For example, I’ve recently invested in a pair of Birkenstocks as they function excellently in summer and in winter you can just wear socks with them and freak out people on the train.”

“The concept for the clip came quite simply from the song itself, the acceptance that something is ‘good enough for now’. Using this we dove into every mediocre or life-hack situation we could think of or realistically achieve. These were all very relatable human experiences and seeing the band performing them adds a new level of hilarity. The line ‘good enough for now’ became the mantra of the clip across all of the shooting, all of the mistakes and the happy accidents, reinforcing the essence of the video.” – Courtney Brookes

A linear continuation from their EP, and born of living in each other’s pockets, Hamish Dobinson (Guitar) explains the new record Mostly Sunny as “kind of our coming of age as a band and signals a new era in Flowertruck. Our EP was our adolescence not only as a band but also as musicians. The LP is a marker of our development together as a band and in our musicianship from so much bloody touring.”