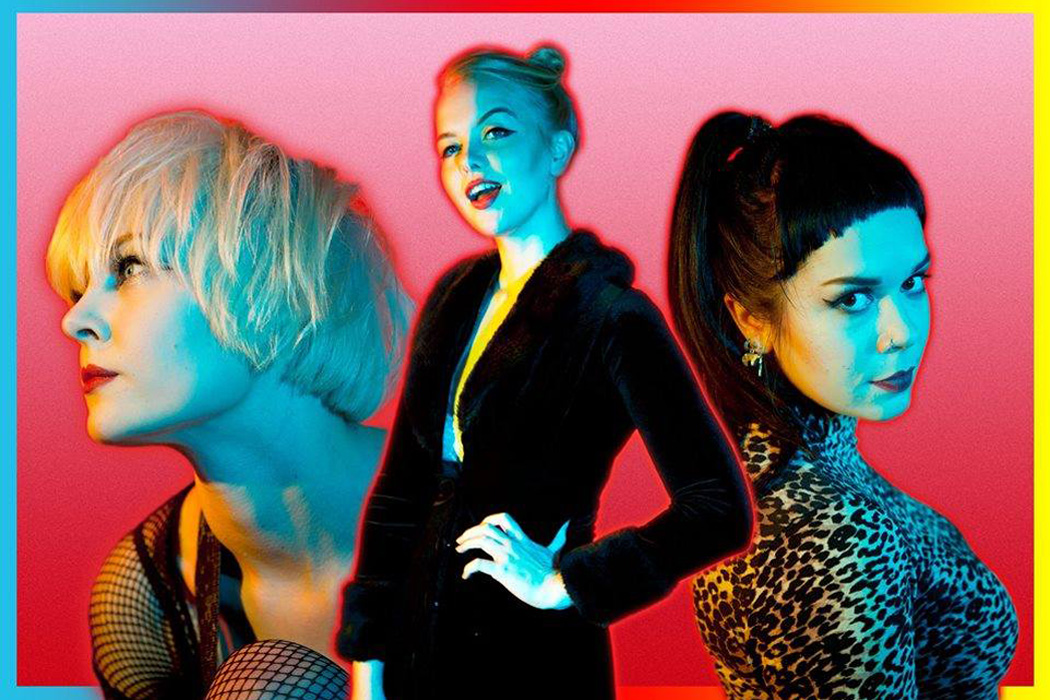 KALTBLUT: Who are Dream Wife? How do you know each other?

Dream Wife: Dream Wife are a pop band trio from Brighton formed of Icelandic singer Rakel and British musicians Bella & Alice. Bella and Alice were little teenagers hanging out at concerts together in Bristol and ended up going to the same art school in Brighton. Rakel also studied there and we all became friends. Dream Wife was formed within the walls of our art school originally as a performance art piece about a year ago, but it went so well we decided to make Dream Wife into a proper band this fall…and we’ve been having a hell of a good time. We’ve all been in bands since our teens, Rakel in Icelandic ones and Bella and Alice in Bristol ones so we’ve had the music in us but this project is something completely new to us.

KALTBLUT: What music did you grow up listening to you? Who are your idols?

Dream Wife: For all three of us it’s David Bowie. He is the king. And Blondie. Kathleen Hannah. PJ Harvey. So many queens out there too. We did our first DJ set as Dream Wife the other day at our friends zine party, Polyester zine, and we realized that our taste in music wasn’t as different as we thought it was. We were all screaming about what to put in there like Alaska Thunderfuck and JLO’s trashonista phase.

KALTBLUT: Where are you based at the moment? Do you take much influence from its surroundings?

Dream Wife: We are based in Brighton in England, which is a cute town full of pastel colored houses and palm trees. The music scene here is very alive and nice to be a part of. Also we’re about an hour away from London but we got a beach. It’s a pebble beach, but it’s still a beach. Rakel is Icelandic but she partly grew up in California – that’s why she loves the beach. And Alice and Bella are from Bristol, they have a canal there, but it’s not really a beach. We often describe our music as ‘Poolside Pop with a bite’, its definitely inspired by the beach.

KALTBLUT: Where are your favourite places to hang out?

Dream Wife: Rakel & Bella live together and tend to lose their keys frequently and when that happens we like to hang out at a pub around the corner from our house called the Joker until our housemates can let us back in. Alice comes around too, we order hot wings and compliment the bartenders on their nicely trimmed beards. Our house is under the railway arches so we like to hang out there and watch the train go by through Bella’s window. We also write all of our songs in Bella’s room. So it’s a magical place. Across from our house is a motorbike shop and next to us is our favorite pizza place called Pizza 500 that’s in a garage run by very loud and sweet Italians. It’s heaven. We don’t really leave our street much other than to play shows.

KALTBLUT: What would be the ultimate stage to play on?

Dream Wife: We made a pinky swear promise to our friends, that are in this amazing drag queen trio in Brighton called House of Grande Parade, that if we’d play the main stage at Glastonbury one day, we would fill the stage with smoke half way through the set and when the smoke would clear: They would come on stage dressed as us. They’ve already chosen who is going to be who – and then perform the second half of our set as us. And who knows, maybe nobody will notice!

KALTBLUT: What was the first song you made together?

Dream Wife: Our first song we made together was ‘Believe’!! Which is incredible and odd because it’s changed so much but we still love it. Love it enough to have made it our first single.

KALTBLUT: What’s the story behind your video ‘Believe’?

Dream Wife: Dream Wife and Maisie are challenging the ideology of the male gaze. Made by an all female crew, the video shifts this gaze all whilst taking ownership of their own representation as female artists and musicians. Turning it into the female gaze. Female empowerment by showing femininity through the female’s view. It’s directed by Maisie Cousins – an artist that we love. The way she uses color is incredible! The style to the video is playing with powerful representations of women Dream Wife aspire too. The playful French yé-yé girls, the stern Debbie Harry, Barbarella and the latex cat woman. Mixing with 90’s and 60’s influences. The super powers of just dancing for yourself. It’s all around playful but engaging in the wider discussion of female representation.

KALTBLUT: Is this video aesthetic/theme something you like to continue?

Dream Wife: This video we just shot was a music video with Manchester band PINS at the Great Escape Festival. A kick ass full female fronted band from Manchester. We’re releasing a split with them very soon. It was very different video. We filmed a lot of it at a house party we put on. It’s a bit like that movie Rock ‘n’ Roll High School….but with a beach.

KALTBLUT: What can we expect from your album?

Dream Wife: We’re so excited to release all these songs! Let us surprise you.

KALTBLUT: Is it true you made a mockumentary?

Dream Wife: We did. All on VHS. Part 2 coming soon.

KALTBLUT: What are your plans for this summer? Are you playing at any festivals/gigs?

Dream Wife: We just started working with Primary International for Europe bookings which is very exciting. Announced so far is we’ll be playing in Ireland, Iceland and around the UK this summer. Also we’re performing in a Twin Peaks immersive theatre installation as Dream Wife for a few days mid June in Berlin! It’s called The Shells – Ausflug nach Neu-Friedenwald. A group of London based and Berlin based artists are recreating the sets and making a whole world for visitors to enter. We’re making a new David Lynch inspired set for it so we’re really excited about showing off our dark sides. Which we actually do half way through our video ‘Believe’.

KALTBLUT: If you could travel back in time to any era, what would it be? And what would you do?

KALTBLUT: Tell us a secret

Dream Wife: Rakel is so bad at keeping secrets.