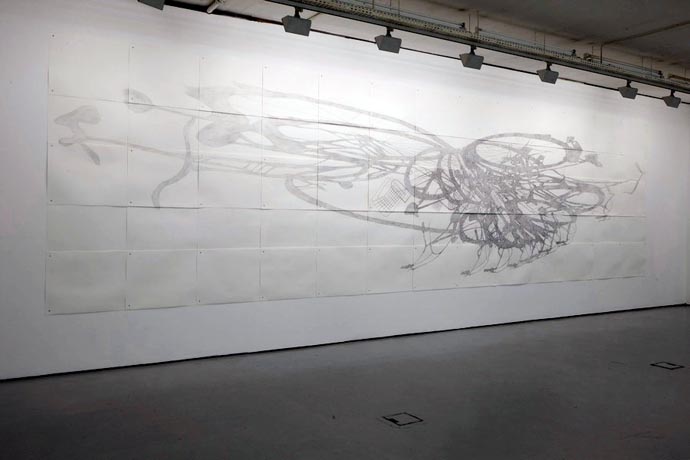 In this article, we’ll explore (unfortunately shallowly) the beautiful and touching work of Nadia Kaabi-Linke. Stick with me, it’s going to be a hell of a ride. First, a story: my bestie once told me how a punk-rocker tried to seduce her back in the late 90’s using a line that goes like: ‘There’s white, there’s black. But all we see is grey. Of course it completely cracked us up. Nadia Kaabi-Linke is, like this lost poet, bathing in grey. In her work though, grey is a rich and vibrant element with a deep materiality.

Her pieces are often shown floating in it. Its neutrality allows them to softly shine and to take their rightful importance. Nadia Kaabi-Linke’s work is important. It doesn’t pretend to be, it doesn’t shout it, it just is.

Born in 1978 in Tunis, she speaks fluent French, Russian, Arabic, Italian, English and, living in Berlin and married to a german, her German isn’t bad either. There’s probably a couple more that she manages. Is it impressing you too? Maybe I shouldn’t have told you because one should really focus on her work. Her whole practice is a beautiful way of showing us various relationships. They are human relationships or from a group to another, from a celestial object to another. There are movements and traces and specially what is in between and can’t be said, but only felt. Her extreme sensitivity is carefully analyzed and conceptualized into forms.

Let’s have a look at Bicycle (2015). In this piece, she transcripts the conjoined movements of the Sun and Earth on a piece of paper through the shadow of a bicycle (which is too, is a cycling device, got it?). The piece started as a one-day exhausting drawing session on the Berlin Tempelhofer Feld to be analyzed and dissected in the studio.

In the end, the 9 meters long work is crafted physically and theoretically. Usually, this kind of things is too good to be true, but it is worth our time because, magically, it is also emotionally powerful and visually stunning.  If visual art was figure skating, Nadia Kaabi-Linke would score a 10 out of 10 in every aspect of the work.

She produces an art of the 21st century, using a soft strength, like the soft water carrying a huge boat. There’s no manly explosions, but a constant and gracious thrust, bringing its viewers forward. We can compare her work to Pino Pascali, Yasuaki Onishi or Jana Streak, but no one pins quite like her the subtle movements that our relationships create.

For the exhibition Walk the Line, at Dallas Contemporary in Texas, USA, she created an eponymous performance dealing with the border separating Mexico and Texas. Performers will take turns to coil thread around poles. The thread has the length of the border between the two territories, and the performers have crossed this border. The thread, a soft material, will become a wall through the coiling.

Her work helps us to understand the brittle space between each other, as individuals, as groups or as bodies, yet she does it with such a grace and intelligence, that you don’t even feel it passing by.