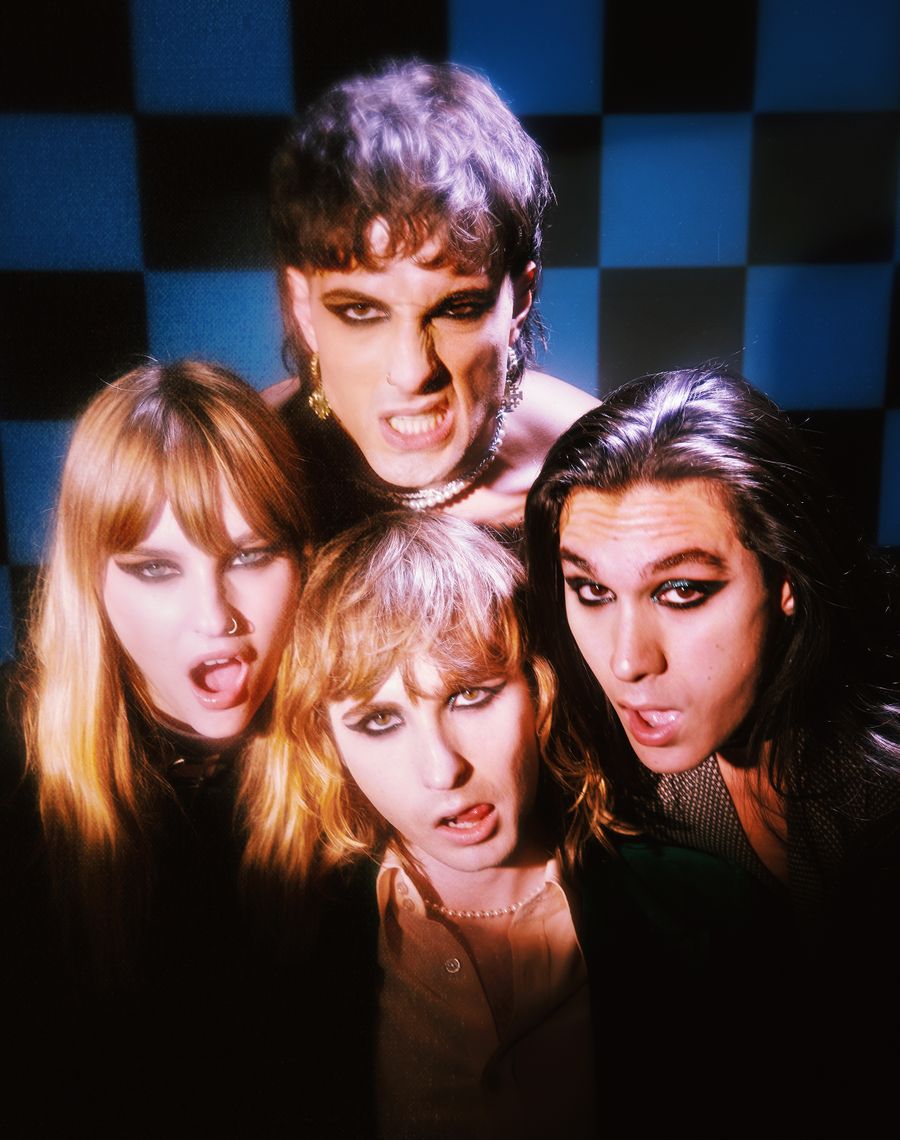 “We attract a mixed crowd, and we love that” – In conversation with Måneskin

2021 was Måneskin’s year! Following their ESC win, the band was seemingly everywhere – from TV performances, festival shows, fashion collaborations and releases, there was no escaping the Italian glam rock band. And the success is no surprise. The band consisting of Damiano David, Victoria de Angelis, Ethan Torchio and Thomas Raggi are celebrating sexual liberation, empowerment and heteronormativity through music and fashion. With daring outfits, controversial videos and rock music that even appeals to the listener that wouldn’t usually listen to guitar-heavy music.

Måneskin’s songs are mainly in Italian, with some English exceptions, such as their hit cover of The Four Seasons’ “Beggin’” and their latest single “MAMMAMIA”, which was just released on the day of our interview.

We caught up with Måneskin in October last year when they were in Berlin to chat about their latest single, their sold-out upcoming Euro-tour, and what language the songs on the next album are going to be in.

KALTBLUT: I guess my first question for you is, how are you dealing with your global fame? You were huge in Italy before, but now it’s swapped over to Europe and the US.

Damiano: Everything has changed for us, but we also feel that nothing has changed. It’s the same thing we had in Italy, only now it’s big all around Europe and other places in the world. We always wanted to reach that level. Since day one, we worked a lot and were very focused to achieve that.

KALTBLUT: Are you still able to do “normal” things?

Victoria: Not really. (All laugh) Sometimes we miss it, but it’s such an amazing job and life we have that we wouldn’t change any of it. But, of course, it has its downsides and the lack of privacy is one. But we can deal with it, and it’s totally worth it.

Damiano: Yes! With all the privileges we’ve gained with our job, we can deal with this.

Thomas: We’ve been on the same page with all this for the last five years.

KALTBLUT: That makes sense. You released your single “MAMMAMIA” yesterday, and the lyrics are in English. Now, you’ve done English songs before, but the majority of your music is in Italian. Is releasing music with English lyrics a direction you want to go into?

Damiano: Honestly, we’ve always been very involved in English-speaking music. But of course, being an Italian artist and being in the Italian business means that you have to, I don’t know, “prefer” Italian because it’s the local language. But now that we have the chance to reach people all around the world, we want to make our music easy to understand. That doesn’t mean that we’re not going to write songs in Italian in the future, of course, we’re going to. But now we have the chance to focus on English music, which is something we always wanted to do.

Damiano: No, our fans are happy, of course. But the general listeners feel like we’re selling ourselves to the international market, but I think they just don’t understand the balance and the stuff that you have to do in this job.

KALTBLUT: So, is the next album going to be in English?

Damiano: It’s going to be mixed.

“I feel very comfortable with English, it gives me the possibility to match words with different sounds.” – Damiano

KALTBLUT: How do you approach writing a song in English and how does it differ from writing an Italian song?

Damiano: It’s totally different. (laughs) With English words, you can cut, make them longer and stuff like that. In Italian, it’s very, very strict. It’s a completely different way of thinking about the melody and writing the music. Personally, because I write the lyrics, I feel very comfortable with English, it gives me the possibility to match words with different sounds.

KALTBLUT: In English, you have words that are straight to the point that don’t exist in other languages. So, I agree, in that sense, the English language is probably a lot easier. When it comes to you as a band, you’ve known each other forever it seems. Your style is unique, not only musically but also fashion-wise. Did you all, from the beginning, have the same understanding of genre and style, or did that come with time?

Damiano: Not at all. (laughs) We dressed like shit.

Victoria: I used to be a hippie. I don’t even know how to describe Damiano’s style… He looked like a chav!

Ethan: I used to wear sandals with socks.

Victoria: But very ugly. (All laugh) Then we had an extreme makeover.

KALTBLUT: How did you find your style?

Victoria: It came naturally. I think being a band and being around each other, we felt a lot freer to express ourselves, to experiment and do things that we wouldn’t have done normally. When we started writing our own music and having a sense of how the song should look and everything, we just experimented with makeup and clothing, eventually, everything came naturally.

KALTBLUT: You spend so much time with each other, how do you manage that?

Damiano: We’re really, really lucky, we had the fortune to meet each other when we were super young and we were still building our personalities. Growing up together allowed us to influence each other and build our personalities together, I think now we have all reached the same path.

KALTBLUT: So you’re taking stuff from each other?

KALTBLUT: That’s amazing! I wanna talk a little bit about your Tour. You’re playing several shows in Europe in 2022, including a sold-out show in London! First of all, congrats! How does that feel for you to have sold out a show in London in a couple of minutes?

Victoria: Many of the bands we listen to and that inspire us come from the UK, so being appreciated by an audience that grew up with rock music is very important.

Ethan: The culture of rock originated there, so we appreciate it a lot.

Thomas: For example, people there have the opportunity to go to different shows and see all kinds of musicians every day. It’s fucking cool.

KALTBLUT: I can imagine, that’s so exciting! How do you prepare for a tour like that? Do you have new music you want to test out, or are you mainly planning to play already released songs?

Victoria: No, we’ll see. We’ll make a proper set-list. A special one for the tour, of course. We’ll be on the road, so we just want to wait and see where it brings us.

KALTBLUT: When you say set-list, do you amend the tracks for the different cities you’re playing in, or is it one setlist for all?

Victoria: No, that would be impossible. (Laughs)

Damiano: It’s not the same set-list for every show, of course. Sometimes we add a song or a cover for the occasion, but usually, we’re pretty stuck to our set-list.

“We don’t want to limit ourselves, so we’re waiting to have time to do it properly and be 100% sure of our music. That’s why we’re not setting schedules for ourselves to release music.” – Victoria

KALTBLUT: And, what’s next for you? Are you recording an album?

Victoria: Every time we have a chance to, we write new music. We’d spend days in the studio. When we have a couple of days off, we immediately go to the studio. We don’t want to limit ourselves, so we’re waiting to have time to do it properly and be 100% sure of our music. That’s why we’re not setting schedules for ourselves to release music.

KALTBLUT: You’ve said that you’re always working on new music on days off. I’m sure that’s very limited. How do you approach writing a new song? Do you just go into the studio with the mindset of “having to get this done”?

Victoria: It’s very hard. It’s the worst. Experimenting, having time to make a song and then listening a hundred times to it to then change something again. It’s an important part of our writing process, but because we don’t have much time, we’re way stricter with ourselves even when we’re writing. That’s the hard part, but we’re managing.

Thomas: It’s so important to write new music and have a lot of energy to work on it.

KALTBLUT: Do you write music on the road?

Victoria: (Laughs) In the hotel at two AM. It goes like “Hey I have a guitar riff, do you want to hear it?”

Thomas: Sometimes we start with the music, and sometimes we are taking lyrics from Damiano.

Since our interview with the band in October last year, they have played several sold-out shows all in the UK and US and won numerous awards. As exciting as that sounds, it shows that the sky seems to be the limit for the band. Having performed their cover of “Beggin’” at various US Late Night shows, attending Gucci’s Love Parade and opening for the Rolling Stones, where Mick Jagger has reportedly given the band his seal of approval. Wherever you are, there seems to be no escaping Måneskin. We had loads of questions about the last couple of months for the band, which we followed up with an email interview.

We visited a lot of cool places, also getting the chance to play in some of the most iconic venues where our favourite bands have been was a real pinch-me moment. – Victoria

KALTBLUT: Loads of exciting things have happened in the last couple of months. What’s your favourite memory and what event was the most surreal?

Victoria: It’s been insane, we’ve had so many amazing experiences in such a short amount of time. America was unforgettable, it was our first time there so everything was new for us. We visited a lot of cool places, also getting the chance to play in some of the most iconic venues where our favourite bands have been was a real pinch-me moment.

KALTBLUT: You’ve opened for The Rolling Stones in Vegas, which means you’ve received the seal of approval of several legends now. How was the show and how was playing in front of an (I assume, please correct me if I’m wrong) older Rolling Stone crowd?

Thomas: We still can’t believe it happened. It was one of the best experiences ever. Not only was it our first-ever arena show, but it was with the Stones! We’re still in a daily struggle to figure out if that happened or was just some wild dream.

KALTBLUT: After having played several shows in the US and Europe. How do the US crowds and shows differ from the European?

Ethan: You can’t really compare it. US audiences are so different from state to state, same as they are from country to country in Europe. But we feel very supported, loved and understood by all our crowds. They bring the energy wherever we go. It’s amazing to see fans from all over the world and every walk of life. We attract a mixed crowd, and we love that.