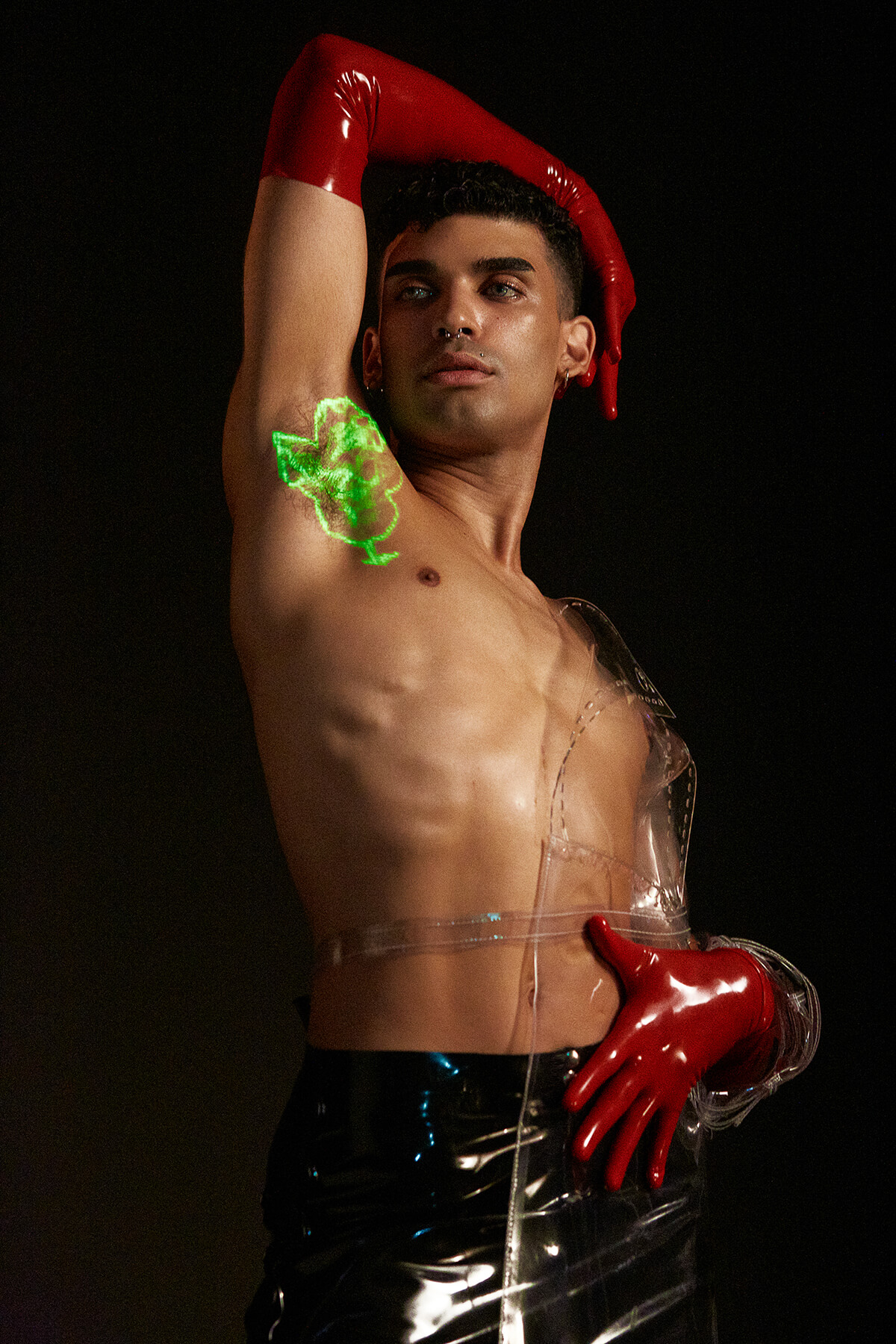 Wes Viz, Wax Wings and creative duo 86Rn (Justyna Radon, Adam Radon) have teamed up to create ‘LUX’ a mixed reality fashion editorial, film and AR filter so viewers can create their own visual masterpieces via Instagram.  This visually arresting film features AR light-filled animated designs created by Wes Viz, projected onto Wax Wings’ body. At one point, his face is motionless as the projected digital identity of light talks for him, as his online avatar. The film features the track ‘Smell of Success’ from Wax Wings forthcoming EP. The hybrid editorial is available at www.wesviz.com

‘LUX’ is Light as Luxury: through light and technology we shape our chosen identity

Adopting the digital self is something the pandemic has forced. Many are spending much more time online, crafting and honing their digital identity. ‘LUX’ was born from this, stripping the film, editorial and filter back to the minimal, focusing on the AR digital persona of the artist, the clothing and the light.

In the future we will see the advent of mixed reality AR as consumables that will be purchased as files, changing traditional consumption habits. People will favour simpler styles augmented with light both built into the clothing as well as icons designed to trigger virtual experiences. As the face of our visual landscape changes, we will turn to entertainment from the temporal digital world, searching for powerful yet transient experiences.

In ‘LUX’ translucent pieces capture the fluidity and amorphous quality of light. Sculptural designers such as Teodora Mitrovska help build layers of sculptural light onto Wax Wings’ body. Beneath the external layers are reflective latex pieces by Studio FCLX and Torture Garden Latex. Custom projections are mapped onto boots by Natacha Marro. The bespoke AR crown filter of barbed wire and red eyes also has a minimal feel. Ultimately, the light becomes the outfit – and the outfit becomes the identity. Augmented reality is a luxury item. Light is the ultimate sign of success in an increasingly dark world.

About Wes Viz: Director and Founder of Secret Lair, Wes Viz is known for her dark and unique style. She has extensive experience in animation and video production and has work spanning a variety of platforms – and realities. In the past year, she set a world record for her bespoke audio-reactive animation for NASA and Channel 4, which was featured in Creative Review, animated stage visuals for Hozier’s tour finale and has had her Augmented Reality designs featured in Hunger Magazine.

About Wax Wings: Signed off the back of an original remix spun during his DJ set in the early hours of an East London rave, Wax Wings immediately became part of The Weird and The Wonderful family. Three years later, he released two EPs on the label – System and The Love Inside Me, which both received incredible support from the likes of James Zabiela, Leftfield and George Fitzgerald. Critical acclaim has closely followed with coverage by Red Bull Music, i-D, Complex, Dummy, Mixmag, DJ Mag, Notion, Clash to name but a few titles; and even a prime-time US TV sync on CSI: Cyber. With a strong appreciation for the art of performance, Wax’s appearances are more typical of a live show than a DJ set. Each element completely self-produced, from the production to BFX visuals, he firmly believes in taking his audience with him on a sensory journey. He has also applied this level of detail to his own club night Spin Cycle. Moving into what he calls a darker, more introspective sound, you can expect a unique, live feel with the producer’s debut album (release date TBC).

About 86Rn: 86Rn are a London based duo of image makers with experience in both commercial and artistic photography and videography. They draw their inspirations from fashion, painting and neo-noir film.

About Wax Wings Lyrics x LUX x Smell of Success: The Smell of Success features demented spoken word over grime-laced basslines, mechanical percussion and the thunderous gunshot that soundtracks the future fashion concept LUX. The lyrics are from a poem written years ago which was found in a book, the concept of LUX resonated with the lyrics and thus the track was born.