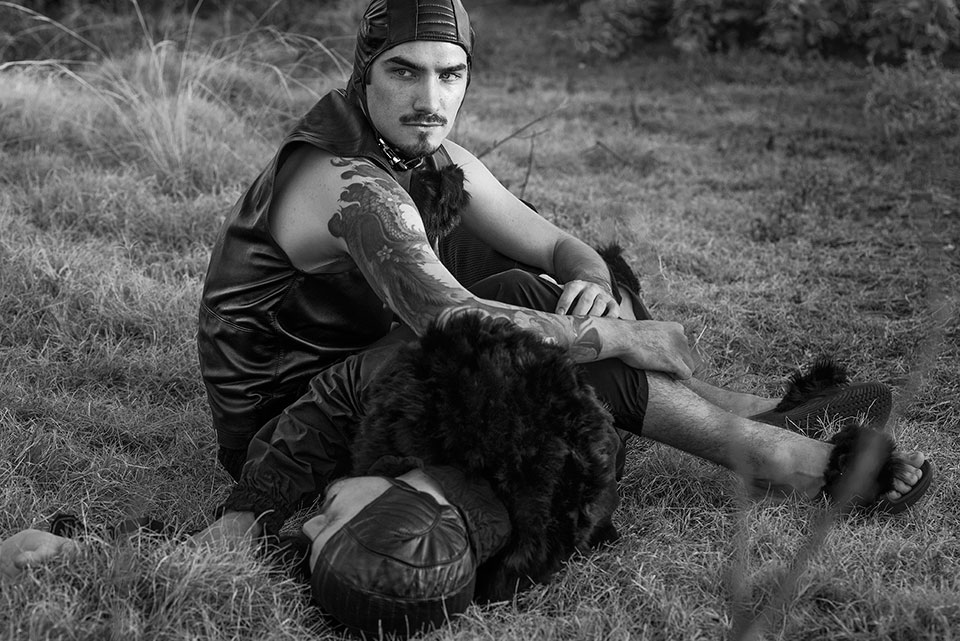 Very Latin. Lautaro Amadeo Tambutto. FASHIONCLASH Festival is an inspiring event held by the Maastricht based FASHIONCLASH Foundation, which takes place annually in a historical town southeast of the Netherlands. One of the most significant fashion event in Europe offers the youngsters from around the world to show their talent and get the chance (or not) to start a career of a fashion icon.

In the year of 2015 the town was shaked by brand new #FASHIONCLASH and of course KALTBLUT was part of it. We watched it attentively and afterall catched the first prize winner in Milan to ask questions about his life, love, past and future.

Lautaro Amadeo Tambutto was born in San Nicolas de los Arroyos an small city in Buenos Aires province, Argentina, so here is what this hot blood is ready to offer.

KALTBLUT: Can you remember the very first case when you thought you might be doing fashion?

Lautaro Amadeo Tambutto: Well since I was child I’ve been involved in arts. When I was five I started to attend an art workshop, where I worked with various fabrics and learned different techniques of playing with colors and compositions .Being seven years old I used to lock myself in my room spending hours sketching collections.

The most impressive thing is that in this sketches I already used LAT as the name and logo of the brand. Speaking about style I could say that since I turned eight I started to buy my own clothes and dye my hair in colors. When I was eleven my aunt Susy teached me how to use my sister’s sewing machine. After that I started to work with plastics and also leather. Before that I’d finished the High school where I took a photography course and a course on dressing of leather. So this is pretty much how this all started.

KB: What was the turning point for you to take design seriously and do it for living?

LAT: Well as I mentioned before I have always been involved in fashion, but of course it was difficult to take the decision to make it a career. So, when I was seventeen after I got my degree in the High school in my hometown, I moved to Buenos Aires by myself to study Art Direction at the Palermo University and after few months I began to make serious steps in turning fashion to the career.

KB: Tell us about your experience in Marangoni?

LAT: I arrived to Milan one year ago to take an intensive course of fashion design in Istituto Marangoni. It was literally intensive. A lot of different classes and bunch of new information. I used to arrive around 8:30 in the morning and leave 8 in the evening. It was a great experience, it helped me to improve my skills and at the same time I realized who I am as a designer.

LAT: The LAT proyects are inspired and based on the Altiplano – an area in Latin America where it is possible to live the four seasons in one day. LAT came to the fashion world with the statement of expression the Latin American culture, mixing the ancestral aspects and traditions with globalisation, tribes styles and high street fashion. My technique is the revaluation. It is an essential thing. You can discover so many new designs by rethinking the past and present.

I ve been working on LATinAMERICA project for two years. The Gaucho, native residents of Argentina and Paraguay were the main inspiration. I reworked Gaucho style with sporty attitude, so the outcome was pretty interesting.

KB: How do you know about Fashionclash?

LAT: Well, a friend of mine Diego Labrin from Peru took part in Fashionclash a year before me, so when I saw an article online about him I decided to apply.

KB: Did you feel that special energy of the festival?

LAT: It was the first time I took part in a festival like this. The management and the team of the event is unbelievable. From the catering services to the runways. Every detail is highly thought out. Fashionclash allowed me to not only show my brand, the project that I’ve been working for two years, but also my identity as a designer. The participation on the festival was already an achievement for me. I could never imagine that I was going to win the first prize. I remember that day before I was with my mom and I said to her that I had a terrible feeling and she repried: “What supposed to happen – gonna happen”.

KB: How did you come to the choice which collection to present on Fashionclash?

LAT: I showed «LATinAMERICA» after two years of work, because it was special for me but frankly speaking it was really difficult to decide which line to choose and which way to show it. During those years I produced more than ten outfits and of course the style has changed from the experimental to the more commercial. So it was a hard challenge for me to balance between all and make a sleek and strong show at the end. I have been always designing total looks, so when it came to the point where I needed hats, I collaborated PARDO hats so they made an exclusive line for LAT.

KB: How did your life changed after winning the prize?

LAT: I ve been shocked for like a week. At the end of the day this all is about recognition. It helped me to get to the scene, to show my passion and my work to people. And what is more important, I realised how much support I could get for what I’m doing.

LAT: Right now I am about to go to London and see Alexander McQueen and Johji Yamamoto exhibitions. I feel in need of London streets influence. At the same time I am looking for a job, since the idea is to stay in Europe to get experience in the industry and continue working on the next collection. This is just the beginning of the long journey.