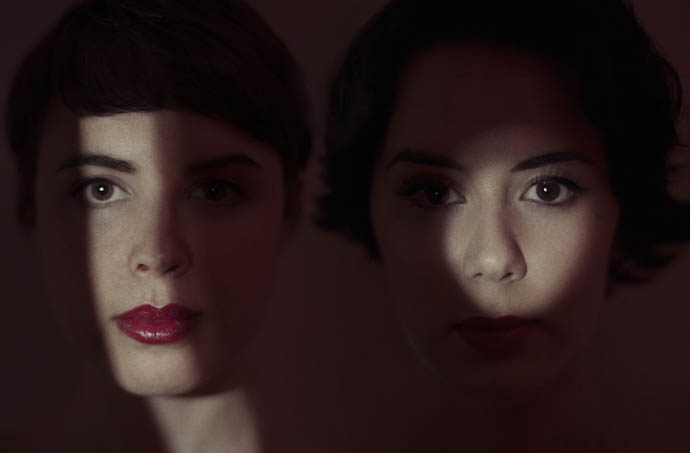 Every week KALTBLUT puts together songs for you to enjoy – this week we are lucky to have an exclusive mixtape by great electronic duo, Wyles & Simpson! Packed full of classic disco tracks, we hope you enjoy this mega chilled mix! If you’re in the Brighton area, catch them  playing tonight at The Great Escape Festival !

KALTBLUT: Who are Wyles & Simpson?

Wyles & Simpson: Hello! We’re an electronic duo with a debut album now out in the ether.

KALTBLUT: What made you decide to start a project together?

Wyles & Simpson: We moved to London to write an album, which has been in the making during the last few years. It’s been a road of discovery as we’re self-taught producers and spent time figuring out how we wanted to produce. In answer to your original question: making music is what we know and love! We always have, always will, make music.

KALTBLUT: Do you both have a musical background? If so, what music influenced you?

Wyles & Simpson: Abigail (Wyles) grew up singing accapella vocals as a self-taught vocalist and Holly (Simpson) is a classically trained musician. We both grew up in music-loving households.

KALTBLUT: Tell us about your debut album

Wyles & Simpson: It’s a 10-track (self-titled) LP with strong vocal melodies, string arrangements and synth soundscapes. Some tracks are more extrovert and will hopefully make you want to move while others are more introspective.

KALTBLUT: Do you feel you choose a particular pattern/routine when producing music?

KALTBLUT: Which track(s) mean the most to you?

Wyles & Simpson: Each track is of equal importance to us. They have various meanings, which can take you to different places… so their significance changes depending on where you’re at.

KALTBLUT: I love your video for Stormy Skies – are visuals important when they accompany your music?

Wyles & Simpson: Certainly! The prospect of emphasising our music with visuals is an exciting concept. We’d love to experiment with Cymatics and visual projection.

KALTBLUT: Is there somewhere specific that you’d like to introduce your music to?

Wyles & Simpson: The possibilities are endless!

KALTBLUT: What city has the best music?

Wyles & Simpson: Every city has it’s own musical mark!

KALTBLUT: Are you touring this year?

Wyles & Simpson: Summer festivals include MITM, Glastonbury, Dimensions, Meadows in the Mountains and The Great Escape in Brighton this coming weekend. We’ve got some exciting shows coming up including a number of headline shows in London in the Autumn.

Wyles & Simpson’s self titled album is out now!