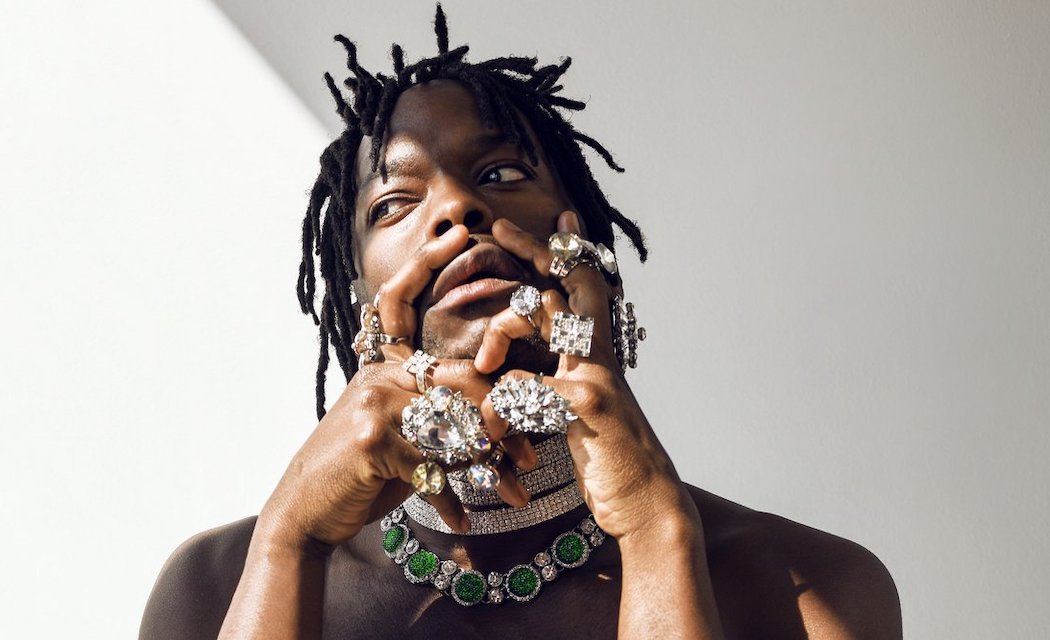 Multidisciplinary artist, rapper, producer, and performer Ojay Morgan who performs as Zebra Katz is a first-generation Jamaican-American who burst onto the scene with the likes of Azealia Banks, Angel Haze and The House of Ladosha, when his runaway hit single “Ima Read” paved the way for his distinctive genre-defiant sound. Last week he announced his debut album LESS IS MOOR, due out March 20 and shared a new single “ISH”. Today he reveals the incendiary video for that single. “‘ISH’ is a square-dance in darkness against oppression,” says Zebra. “With this visual, I wanted to capture and release the rage I’m constantly in as a Black artist. This is what happens when I lose it – in a non-threatening and sensual way. With only a day to rehearse and establish choreography with Tom Heyes, I felt confident knowing it was time to battle myself out of the white box, step back into the zone, and fully embrace my inner ISH.” You can pre-order LESS IS MOOR here.

“Director Joseph Delaney and I wanted to reflect the songs’ energy through performance while also reflecting on dissociative disorders, mob mentality, and political media black-outs through the warping of our own lens” continues Katz. “Our revolution will not be televised and the struggle ISH real. ISH was written in Berlin and recorded in Sega Bodega’s London studio. The track is about boldly owning your shit (ISH) and amping yourself to face what’s ultimately ahead. The video begins with an alarm to warn the viewer of the abrasiveness that’s to come. Sega and I wanted to craft an up-tempo track with heavy bass and a certain level of weight to it – a heaviness so deep that you could feel in your chest. Disclaimer: the style of dance in this video is not Vogue and /or Ballroom”

The wider LP LESS IS MOOR is a deeper look into his sonic universe. Sexually charged and abrasive, the collection is a bold, sonic experiment that meshes industrial hip-hop with drum ‘n’ bass and unidentifiable sonic territory. Zebra Katz’ explosive, viral single “Ima Read” was picked up by Diplo’s Mad Decent imprint Jeffree’s and garnered further popularity when it ran for 11 minutes on a Rick Owens runway at Paris Fashion Week. This spark leads to an avalanche of remixes from Busta Rhymes, Tricky, Azealia Banks and many more + genre-defying live performances at The Broad museum in Los Angeles, Art Basel in Switzerland as well as the New Museum, Metropolitan Museum of Art, MoMA PS1 and Brooklyn Museum in NYC. Zebra Katz joined Gorillaz on their Humanz tour and was featured on tracks, “Sex Murder Party,” “The Apprentice,” and “Out of Body,” which also featured Kilo Kish and Imani Vonsha.

Recent singles “IN IN IN” and “LOUSY” are examples of Zebra Katz’ desire to repossess his narrative, exploring issues like the Black experience and sexuality, all the while mixing in devastating ruminations on the life of a star: “they all love when you dead / and you six underground.” Used as early as the Middle Ages, the word “moor” refers to the black Muslims of Northern Africa. Today it simply means black and is synonymous with “negro.” When Zebra Katz says “I’m that sick sadistic fucking twisted bitch” on “ZAD DRUMZ,” he’s wearing his darkness for all to see. If you listen hard enough, you can almost hear James Baldwin saying, “To be a Negro in this country and to be relatively conscious is to be in a rage almost all the time.” LESS IS MOOR lets you into this rage so you can dance with it.

Remaining true to his off-the-cuff way creative style, LESS IS MOOR finds the musician newly empowered and unafraid of being noise-driven, biting & caustic. The album draws inspiration from diverse sources like Little Richard, Nina Simone, James Baldwin, and Grace Jones and it features guest appearances by Shygirl and S. Ruston, with a myriad of star co-producers such as Sega Bodega, Tony Quattro and Torus. Amidst all this talent, listeners will rarely find a down moment on the album.