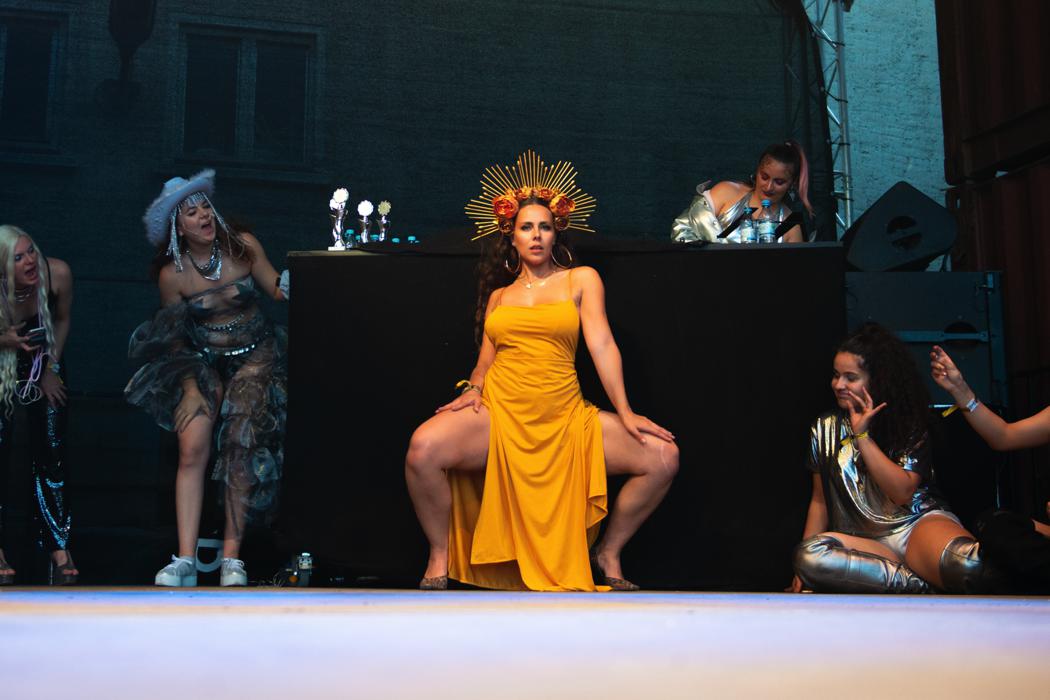 One of Germany’s voguing finest, Zueira Mizrahi Angels, will be hosting the Fire Mini Kiki Ball this Saturday. Read how she is shaping the scene as the mother of a house and explains what Balls and Kikis actually are. Her Kiki is part of GOLOSA’s queer party in Suicide Club.

KALTBLUT: Hello Zueira, when did you start to vogue and what is your story in ballroom?
Zueira Mizrahi Angels: In 2011 I saw a small voguing performance in Hamburg and started going to workshops and classes. It was only a handful people doing it and we didn’t know much, but we knew we love it. I learned more about this originally black and latino gay and trans culture from New York – especially with my white cis-woman ass. I learned how it’s far beyond the „dance“ voguing, but a safe space for expression of marginalized groups of people, how it’s a whole lifestyle and a mainly a celebration of queer brown folks that became inclusive to everybody showing respect for the rules and people in it. I travelled to other balls internationally from 2014, found my main categories Sex Siren and later Body and started to organize my own events in 2016. Meanwhile I’m one of the leading protagonists of the German ballroom scene. I became a member of the Iconic House of Mizrahi from New York as well as German mother of the Kiki House of Angels in 2016. I threw balls from 20 to 120 participants, from 50 to 800 spectators. I am one of the main ladies in my category Body in Europe and I got awarded „Germany’s Finest of the Year“ by the Paris ballroom scene a second time in a row now.

KALTBLUT: What was your motivation, what did you like about it?
Zueira Mizrahi Angels: Especially for me and my categories Sex Siren and Body in which I show much sensuality and skin, it was absolutely sexually liberating. One more time it takes a queer space like this for a woman to feel safe, to not be objectified, to feel empowered and celebrated no matter her physical features. Also, Ballroom taught me a way of fierceness that helps me get through daily life more graciously and I found family – not only in my houses, but also with many other people from the scene.

KALTBLUT: What is it like to be a Mother of a house?
Zueira Mizrahi Angels: It’s many things. You do take over responsibility for your kids you get in your house – not only when it comes to ballroom and getting outfits ready or training, but also when it comes to life. Problems with their housing, (love)sickness, providing them with gigs, I try to be there. I’m not an über-mom, I can’t always help with every issue – especially those that concern my gay or trans kids, since it’s not my reality, but we try to support each other then.

KALTBLUT: Could you explain to us what a Ball and a Kiki are for the people who have never been to one?
Zueira Mizrahi Angels: A ball is the place where all the ballroom kids meet to compete and exchange. The organizer of a ball decides on the categories and outfit themes. A competition always needs a jury, so those who made their name in the scene already, that win a lot or that are mother or father of a house sit on the judge panel. First each contestant has to prove in a preselection called „tens“ if they understood and perform their category correctly. Then they battle the others who got their tens until there is just one winner left. A Main Ball is fierce. Oftentimes the outfits are very elaborate and demanding – especially for fashion and beauty categories – and many people prepare for weeks and do not come to play. A kiki ball is a place to have fun. It’s for the younger generation, the outfits are more casual and the ballroom kids can try new categories to see what they want to walk in the main Ballroom Scene.

KALTBLUT: The perfect song to vogue to?
Zueira Mizrahi Angels: There is not just one song. It was mainly House and Disco playing at the balls. „Love is the Message“ by MFSB was a big hit in Ballroom in the 80s and in the 90s Masters at Work’s „The Ha Dance“ got played everywhere. That ‘Ha crash’ hits on the four-beat, which turned out to be the perfect counting for the voguing highlight move ‘dip’ – the falling to the ground in a dramatic or soft way. The sample then took over and created a whole new genre: Ballroom music. It first got used by Vjuan Allure and is now to be found in pretty much every vogue fem beat. MikeQ for example made it from a ballroom DJ to a globally booked sensation with his ballroom productions.

KALTBLUT: What was your first memory of a Ball?
Zueira Mizrahi Angels: I walked Runway at the first ball in Germany in 2012. I wore the most amazing huge latex hoop skirt and felt like a queen for probably the first time in my life. I couldn’t hear the music, because the people were screaming so loud. I later realized my talent is not walking like a haute couture model though and found my purpose as Sex Siren and Body.

KALTBLUT: You will host a Mini Kiki Ball at the next Golosa, could you tell me more about it?
Zueira Mizrahi Angels: I am the organizer and host of the Fire Mini Kiki Ball, which means I made up the categories and will be commentating on the mic. A host or commentator leads through the competition, tells when the next category starts, asks the judges for their votes and mostly hypes up the ballroom kids with repetitive chants and raps while they are competing. For bigger events, I fly in someone who’s got more lung volume than me to take over the chanting. This time I’m gonna be commentator and host in one and we’re gonna have a kiki. I’m trying some new things next to Runway, Performance, Lip Sync, and Sex Siren: I wanna see who got the best luscious lips, we got Face with Fire and I wanna find out who the kinkiest fashionable Golosan is. 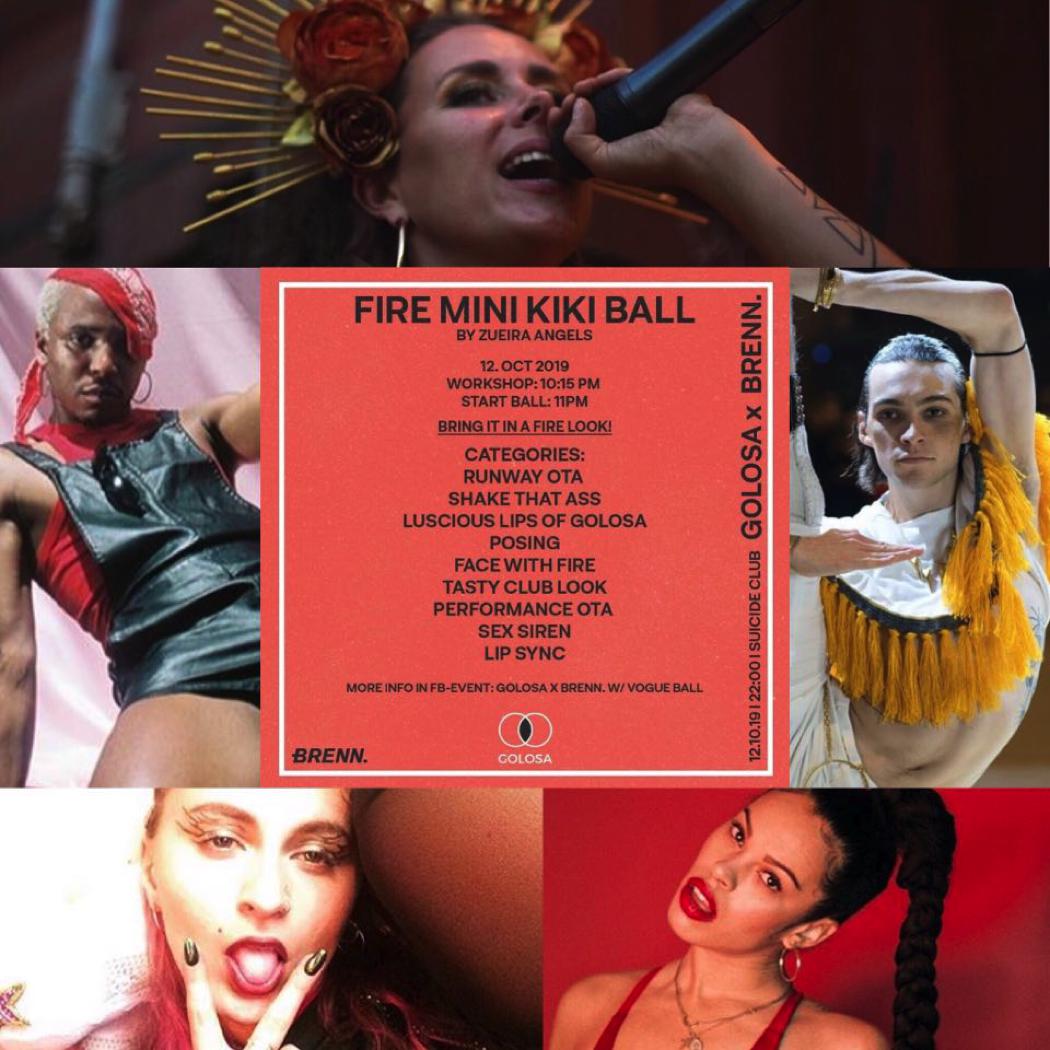 KALTBLUT: What is your favorite category?
Zueira Mizrahi Angels: Next to my own Body and Sex Siren which give me so much life and confidence, it’s hard to decide. There are too many. For Face it’s crazy to see how the contestants take over the whole room just with just one blink of the eye. For Runway many wear amazing looks, for Bizarre people come out in huge non-human costumes and then there are super fun categories like Shake that Ass and Lip Sync. Only to name a few. It’s the mix that is so fascinating.

KALTBLUT: What was your freakiest experience?
Zueira Mizrahi Angels: Ballroom is not about being freaky – cause the people who founded Ballroom were already looked at like freaks by the white, heteronormative society when they are just gay or trans. There might be freaky moments happening, but ballroom is about opulence, it’s about feeling like you are that somebody, untouchable – at least here and now in our own safe space.

Your hostess with the mostest:
Mother Zueira Angels

BRING IT IN A FIRE LOOK! (mandatory to compete) 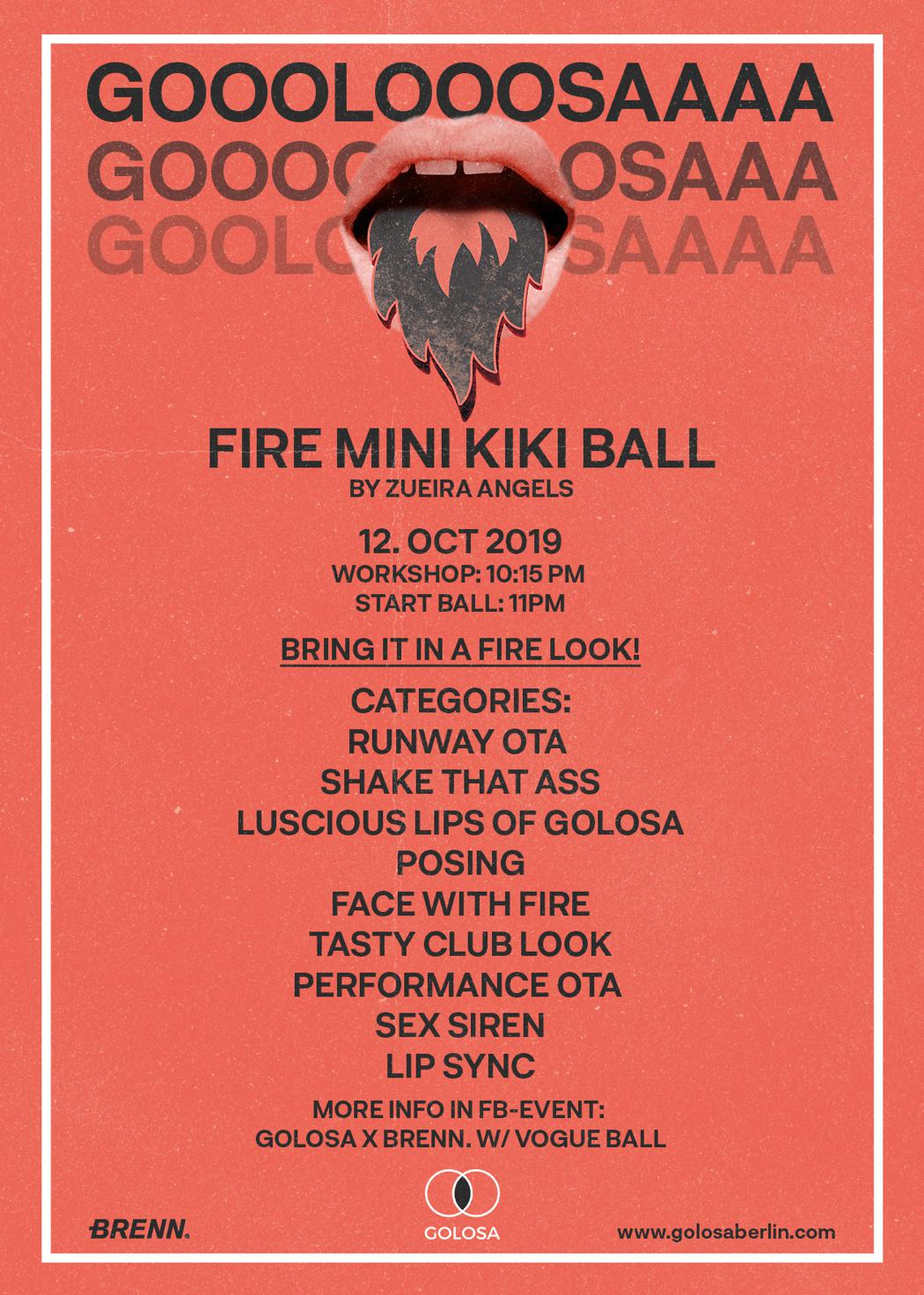 Do you want to walk the Kiki Ball?
Register via hellosoextraberlin@gmail.com with name and category to get reduced entrance.