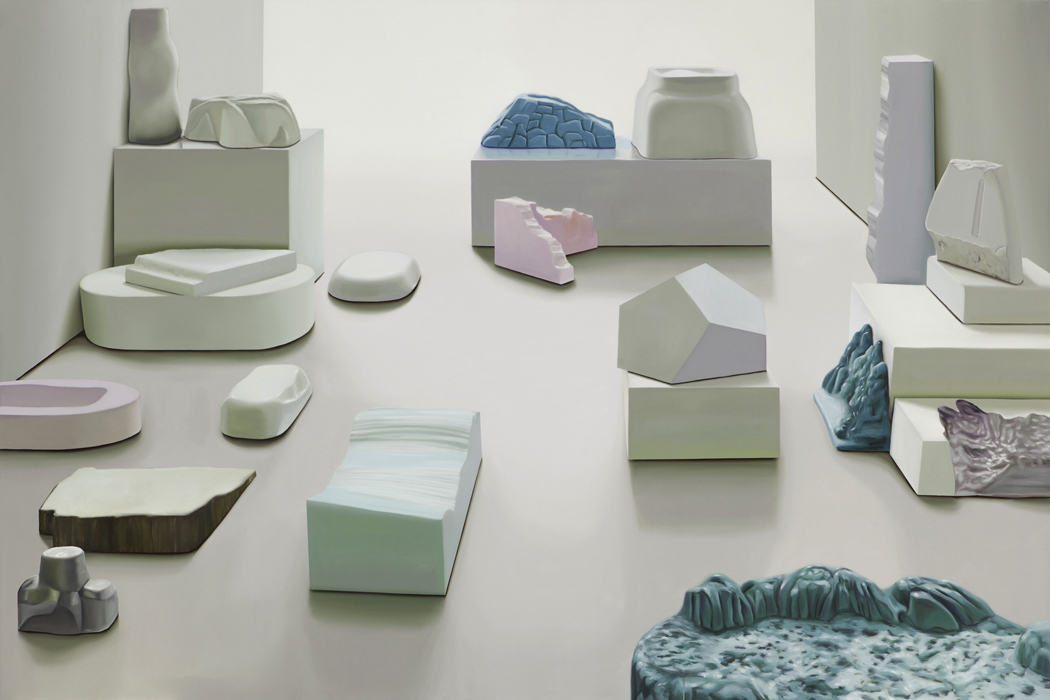 Because 2015 is supposed to be a good year according to my Chinese horoscope, I decided to start it with an interview of Maude Maris. Maybe you remember what’s the name of this phenomena that pushes you in the right direction because you had a good omen and feel like you are making the good decisions (if you do, tell me as I don’t). I’ve been lucky enough to be Maude Maris’s junior while we were attending the Ecole de Beaux-Arts in Caen. We were not exactly encourged to pick painting back then, but Maude was here, already formulating the basis of her rigourous practice.

This to say that I’ve been around Maude’s work of quite some time now (let’s say since the beginning of this millenium). She has been deploying her consistant vision like a magic bird its wings in slow motion. Thing is, it seems those wings are never ending. Maybe it’s a cheesy image I’m picking, but I like to express ideas in a simple way so everyone (you!) can understand.

There’s a broad variety of ‘things’ a painter has to do or be or be able to XX. In this image, the wings are the conglomerate of all those things. And in Maude’s work, everything was here from the beginning, and she’s growing it patiently, admirably. She’s currently residing at the Cité des Arts in Paris, and is as well a busy busy bee with upcoming residency in Gernoble, etc. Actually, the whole list will be at the bottom of this article because it’s too long to tell you now.

Let’s talk about her practise. Ever since the beginning, she was always only interested in inanimated objects. I have never seen a Maude Maris’ painting of a cat. She turns to volumes, collecting small objects, casting them in plaster, arranging the casts on a mini stage, taking a picture of that, and then making the painting.

This complex process has been developped along the years. Back in the days, she was using internet found images, then tryed using 3D softwares before finding the stability in her nowadays process.

It is important to consider the transformation that the objects and volumes had to endure to be able to arrive on the painting. As LeeAnn Taylor puts it, “We’re all butterflies. Earth is our chrysalis.” Ha! I got you here, but more seriously this time François Truffaut did evoke this better when he said that art was a translation of the reality. Of course, Maude Maris is operating several layers of translations in her process, playing the Telephone Game: a group of people sits in a circle. One thinks about a phrase and tells it to it’s neighbour in the ear so no one else can hear. The neighbour passes it to its neighbour, etc. Until it comes back to the first person, sounding and meaning having been completely altered.

It’s a very funny game, you should play it. Maude is indeed playing a kind of Téléphone Arabe in her works. And the result sends us to a whimsical world where volumes are pushed to the surfaces, and the arrangements of it all becomes a visual translation of emotional relationships.

WAW? Where did that magic come from?

It is thanks to her rigourous practice and the serious of her research that Maude Maris captivates this extra of the reality, demonstrating once again that toying around with volumes can also be a painter’s job.

In some ways, she reminds me of Fabienne Verdier. Don’t you feel the same dedication, preciseness, clearness of the mind?

To finish, I’ll let you with this Zen proverb: