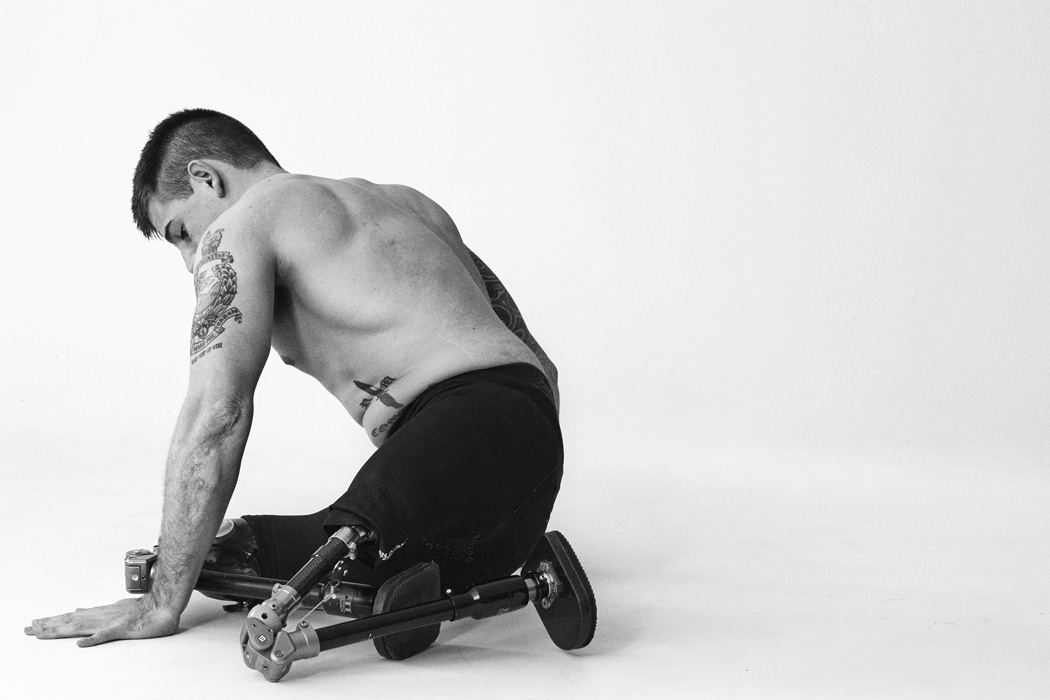 “....I was halfway up in the air thinking, ‘This is really surreal situation, what’s happening?’ and then I hit the floor and thought. ‘Shit, a bomb’s gone off.’ Then I realised it was me that had been hit. I looked down, and could see that one of my legs was really badly damaged and hanging off, and the other one was missing.” Marine Joe Townsend, Royal Marines, injured in Afghanistan, aged 19.
ArtMusic
·November 20, 2014

An Interview: Bryan Adams! Wounded: The Legacy of War

Bryan Adams may be best known as the singer, Adams has proved to be the master of visual arts, capturing stunning shots of musicians, actors or models. When he is not plucking guitar strings, you will most probably find him in the studio picking the right lens for the next photo shoot. In his last book “Exposed” Adams photographed everyone from Mickey Rourke to the Queen of England to his most recent book “Wounded – The Legacy of War” dedicated to wounded British soldiers. He started as a singer-songwriter who has received countless other awards, and Adams is a master at taking people on a musical journey, but when his photographs take centre stage, the path being navigated is one of visual connections, sometimes harsh and shocking; sometimes whimsical and witty. Wounded: The Legacy of War – Photographs by Bryan Adams! An exhibition from 12 November 2014 – 25 January 2015 at Somerset House, London WC2!

KALTBLUT: The sensation of taking photographs is surely very different from playing music. What’s the feeling like for you?

Bryan Adams: Both are all about creating something from nothing, and hopefully at the end of the work, you are left with something beautiful.

KALTBLUT: What was the turning point in your career when you decided that guitar was simply not enough and you became a professional photographer?

Bryan Adams: There was never any conscious decision, it just happened. I’d kept a kind of diary of my work on tour and recording sessions, and from there, I started taking portraits of friends.

Bryan Adams: I think he’s quite OK with it now, but at the time he would have rather I had taken a more academic career I suspect.

KALTBLUT: You have recently released a brand new album called Tracks of My Years, which is a 16-song album. The cover photo of the album depicts you as a young man with long hair. Where these the rebellious days of your life? You mentioned somewhere that you were ‘on the highway to hell’.

Bryan Adams: I really don’t have any reference to know if I was any different to any other teenager, I was just driven to make music somehow.

KALTBLUT: In ‘Wounded: The Legacy of War’, you portray British Armed Forces personnel, servicemen and women from the Iraq and Afghanistan wars and the injuries they have sustained. Most of the photographs reveal shocking human body deformities – their missing limbs, prosthetics and scar tissue. What was your message behind eternalising these life-changing injuries in photographs that certainly leave many spectators silent?

Bryan Adams: I think the message is obvious; war is not the answer in resolving problems. Sometime in 2004, George Bush said “the world without Saddam Hussein’s regime, is a better and safer place“, and as we’ve seen, nothing could be further from the truth. Millions of displaced people, hundreds of thousands dead, and untold thousands of people wounded, physically or mentally. It’s an unspeakable disaster, as is the war in Afghanistan.

KALTBLUT: Through your thought-provoking photographs you tell a story of human sacrifice. Did the deformed human bodies that you have been capturing over the course of four years now affect your perception of the world we are living in today?

Bryan Adams: It was truly humbling to do the project, and one can’t help but be affected by it. It was a document to this particular time of wars in Iraq and Afghanistan that I wanted to make. As far as how it affects my perception, well, Andrew Marr said it best when he said every politician who is making decisions on military conflict should have this book on his desk.

KALTBLUT: ‘Exposed’ is all about celebrities. Your portraits of Mickey Rourke in the bathtub, Pink top-less, or Dustin Hoffman wearing a suit and fishing in the sea surf, are highly intimate images. What is it like to work with the people who are in fact your friends?

Bryan Adams: It is an enormous privilege to work with such talented people and the people you mention are examples of people who really contributed to the shoots by being so open minded. With the exception of Mickey, who I knew before, everyone else I met through taking photos…

KALTBLUT: Any funny stories that happened during one of your photo shoots? In my mind is the ‘enfant terrible’, the actor Helmut Berger.

Bryan Adams: There’s usually no shoot where something funny doesn’t happen. He’s a good example, and actually great to work with.

KALTBLUT: You are the co-founder and the initiator of the Zoo Magazine, which has just celebrated its 10-year anniversary in Berlin Museum of Natural History. What was the idea behind founding the Zoo Magazine and why Berlin?

Bryan Adams: there wasn’t much happening with independent magazines in Germany in 2003. My collaborator Sandor Lubbe and I met at a bar in Milan after a fashion show and we started talking about photos, he called me sometime later to discuss the idea of doing a magazine together, and I suggested we call it Zoo. It was kind of that simple.

KALTBLUT: Your schedule seems to be extremely busy with the „Reckless 30th Anniversary“ tour coming up now, the photographic exhibitions around the world, and business plans in Berlin. You are the father of two little daughters. How do you cope with the family life, and the role of being a father, which is quite new to you?

Bryan Adams: Things are busy that is for sure, but it’s always been a challenge to get things done, and I quite like the idea of doing many things at once, maybe I should have been a juggler?

KALTBLUT: What’s the driving force, the engine that keeps you going?

Bryan Adams: fruit and veggies, with the occasional cup of tea…

‘Wounded: The Legacy of War’ (£48, Steidl) is out now. An accompanying exhibition is at Somerset House, London WC2, from Wednesday to 25 January 2015. More informations HERE.