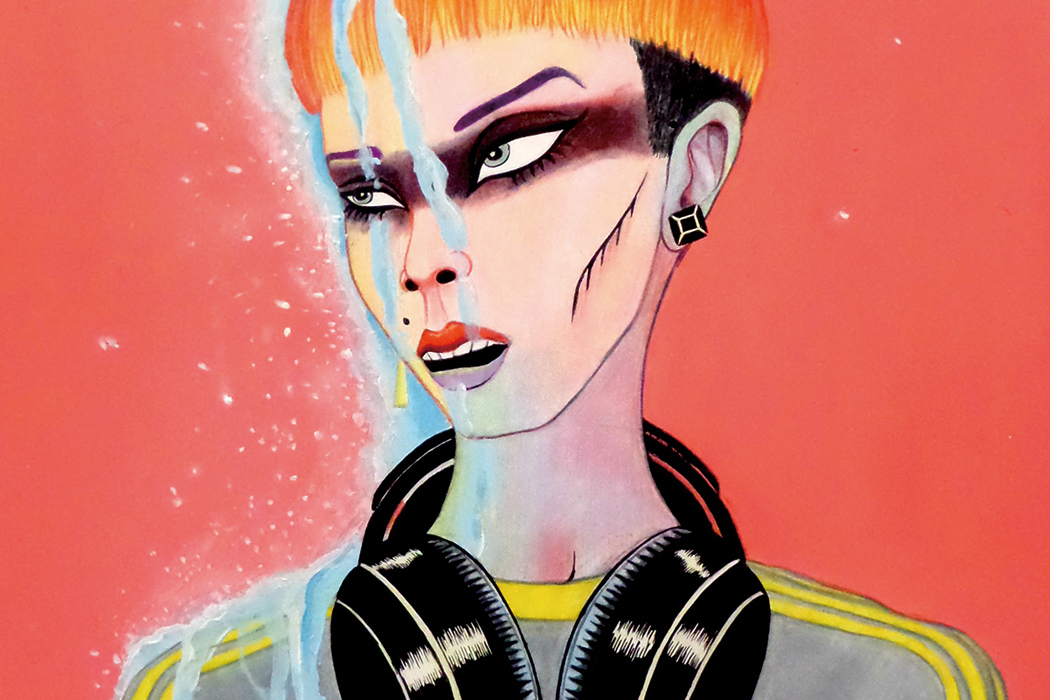 Chaotic Metropolis by JAPA – An Interview

KALTBLUT Magazine presents the New York City based visual artist – Jacopo Degl’innocenti aka JAPA. His visual work is inspired by the craziness of a modern city. After years of ‘Regular’ job, JAPA decided to make a twist in life and became a professional artist. Capturing the urban chaos with his lively art works. 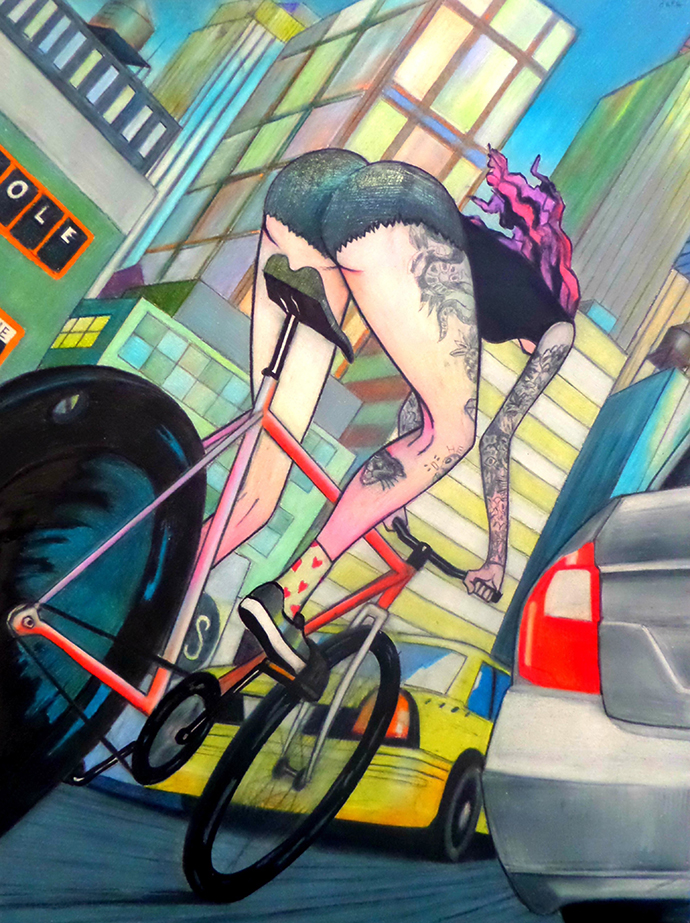 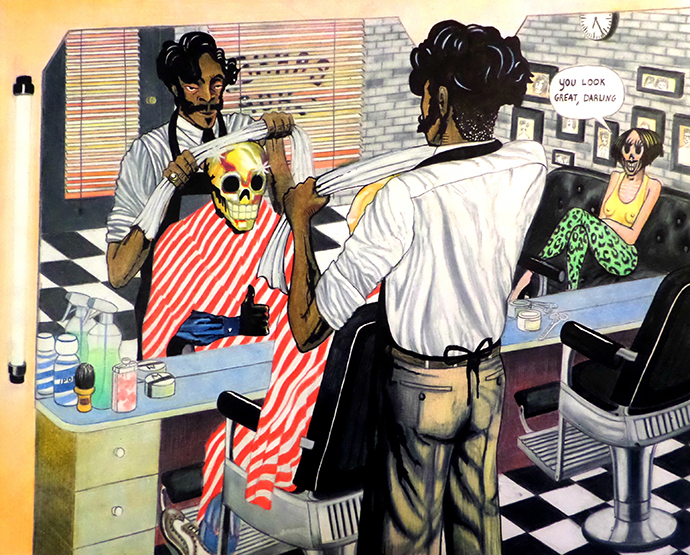 KALTBLUT: Can you tell us a bit about your background and how do you start art journey?

JAPA: I was born and raised in Florence, Italy, where I studied fine arts and a bit of acting, I’ve done art since I was a kid, but I started doing it seriously about fifteen years ago, exhibiting my work in various bars, shops and art festivals in Florence. 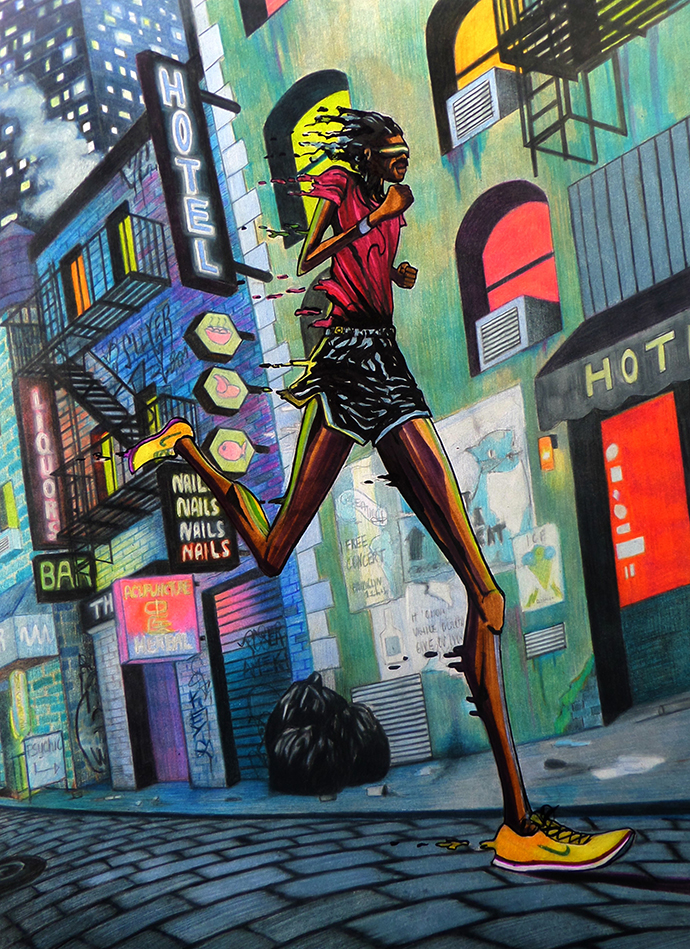 After years of doing a lot of “regular” jobs, I decided to turn my life and become a professional artist. I’ve always been very attracted to urban life and chaotic metropolis and in 2010 I decided to leave my country and move to New York where I attended a fine arts academy and courses in illustration and animation.

KALTBLUT: What’s the message and story you want to tell with your works?

JAPA: My goal is to let the viewer have an experience while looking at my art, I hope to give the emotion of something magical, mysterious and fun, a trip to a different reality, I like to tell stories.

KALTBLUT: Is there any influence to your art works from your Italian background?

JAPA: Yes, surely my evolution as an artist and as a person has been influenced also by the life I lived in Italy before arriving in NY. 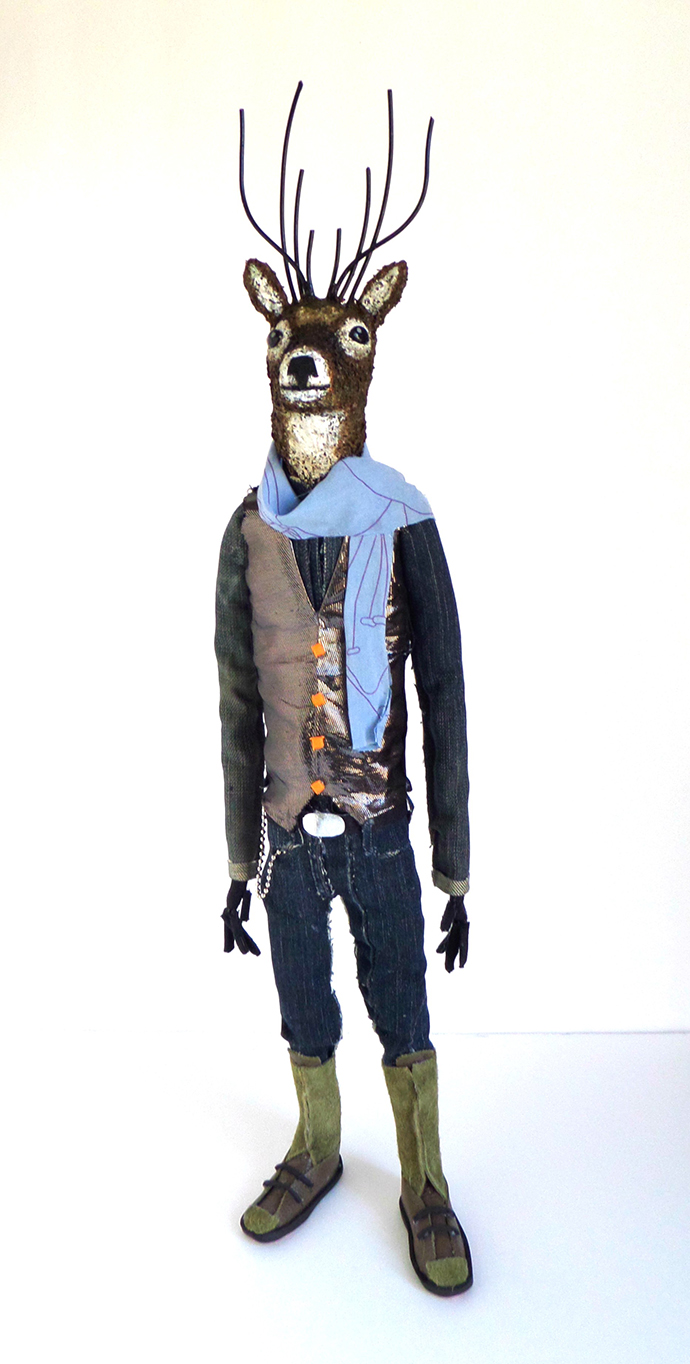 KALTBLUT: Why did you choose New York city as your base?

JAPA: New York was the beginning of my new life as an artist and it is the city where I met so many sides of me that I did not know before, it is a city that makes me feel very active and alive with lots of chaos, lots of dirt, a lot of very interesting characters a great mix of cultures and a continuous evolution, a tough city, like a big wave that keeps you up and down, but has everything I need to create my art. 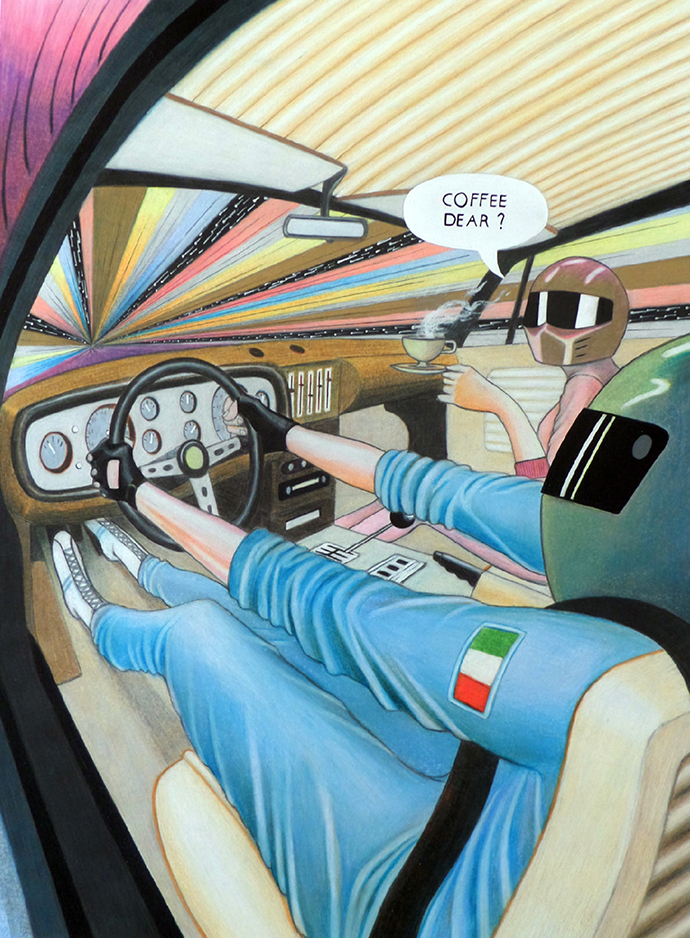 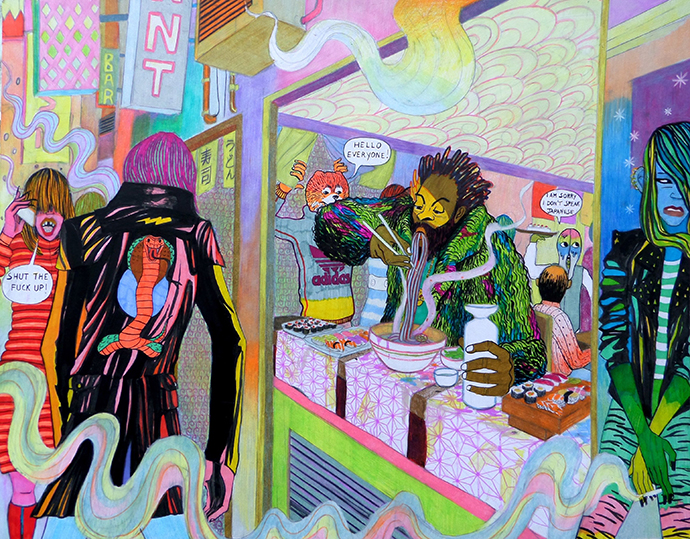 KALTBLUT: From your works, we can see a lots urban scenes, what inspire you the most in NYC?

KALTBLUT: Your illustrations are always with vivid colors. How do you choose the color palette for your works?

JAPA: I do not have a specific process in choosing colors, clearly if I represent a night or day scene for example, I try to choose appropriate colors, but basically the choice of colors is a very instinctive thing.

KALTBLUT: In some of your works, you presented the characters with animals. what does that mean?

JAPA: In New York everything is plentiful so there are also many animals and one thing that struck me a lot was seeing their adaptation to urban life, absolutely not intimidated, they are ready to fight for food, aware of sharing the city with 9 millions of human beings, they too have become part of my inspiration. 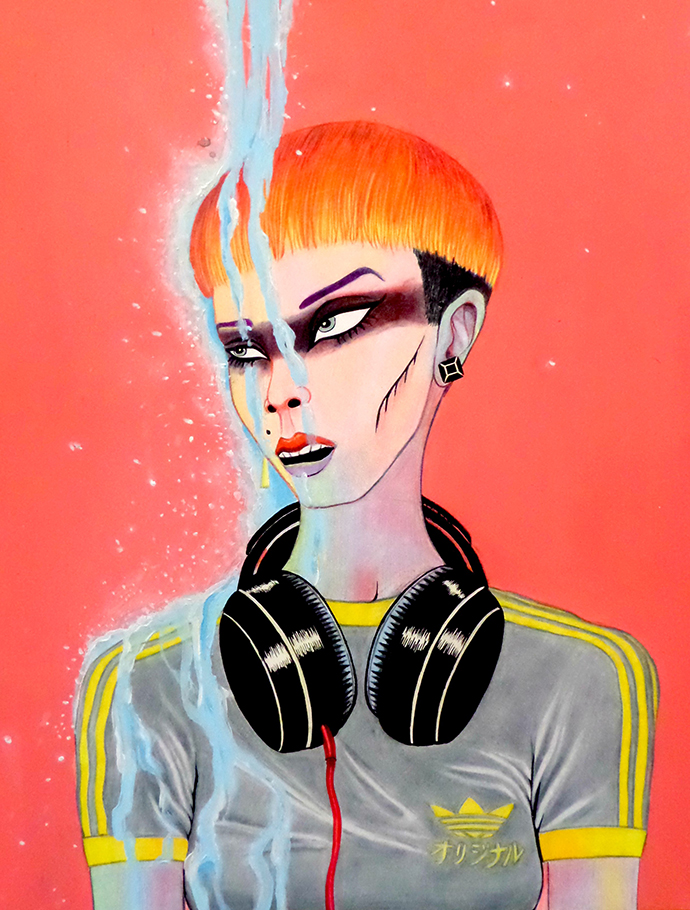 KALTBLUT: You also do figures sculpture art works. Does your sculpture works relate to your illustration visions?

JAPA: Somehow yes, they too are part of my creative process and I like the idea of having a three-dimensional expression of my art, I started making figures in 2013 at the same time as my first stop motion animation film was created.

KALTBLUT: Is there any other big city that also inspire your art works, or you wanna explore?

JAPA: I’ve been to Tokyo for two weeks about 9 years ago and I was really impressed, I would like to have the chance to live there for a few months and see what changes there might be in my art, creating it in a different environment, I would also like to visit many other major cities in the world where I’ve never been, like Hong Kong, Shanghai, Los Angeles, Rio de Janeiro.

KALTBLUT: Which artist inspire you the most in your artworks?

JAPA: I don’t have a particular artist who inspires me, but I think I’m influenced or is more appropriate to say I am inspired, by some different artists, such as Italian illustrator and comic book artist Andrea Pazienza, some Japanese animated films, American comic book artists such as Paul Pope, Eduardo Risso, Frank Miller or contemporary illustrators such as Yuko Shimizu, James Jean and many other artists.

KALTBLUT: What is your upcoming project?

JAPA: In the near future I will begin to make a graphic novel and a new animated short. 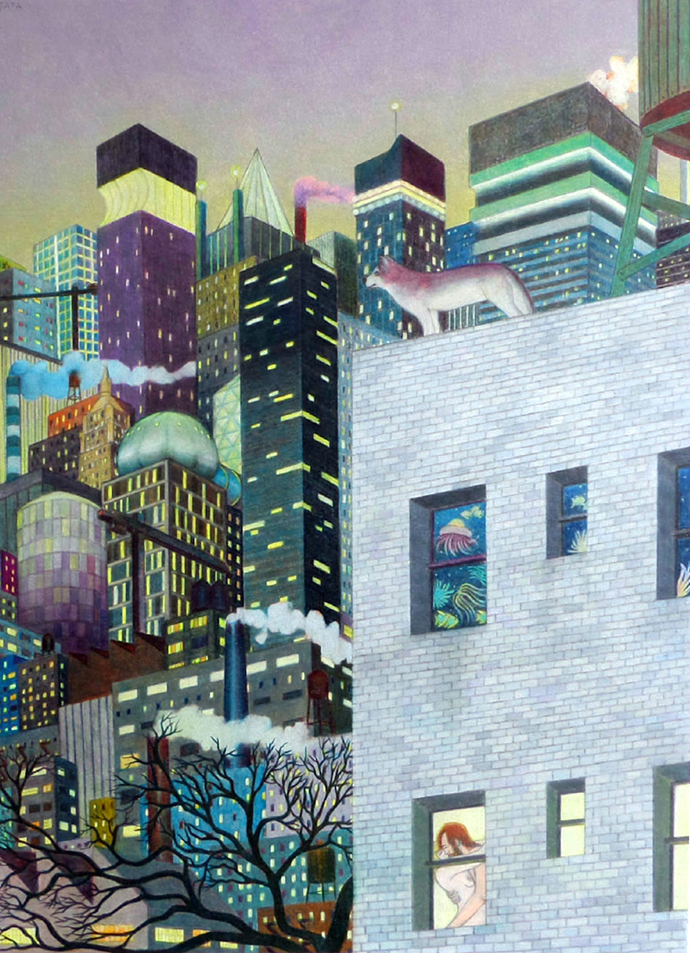