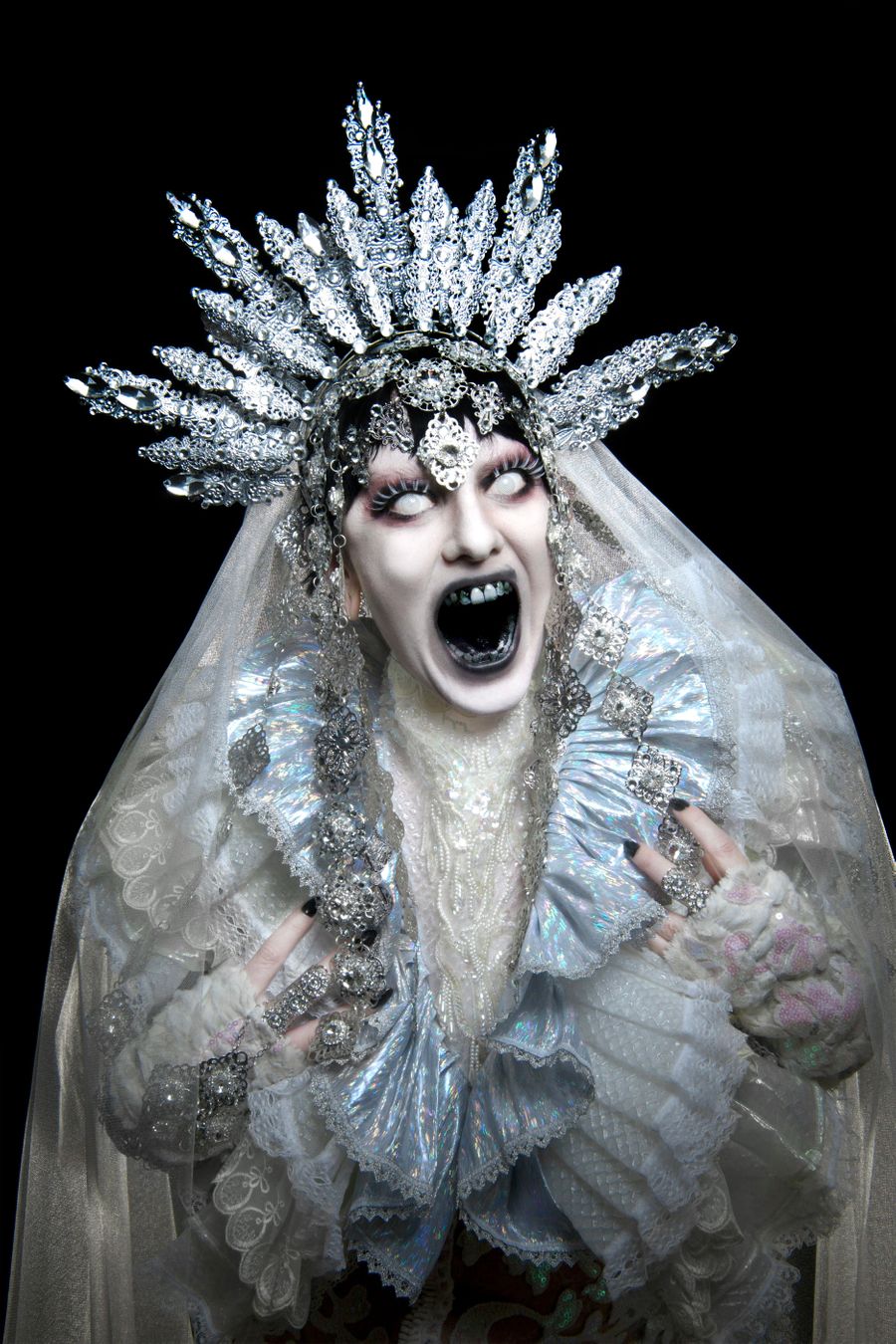 “Outside of the joy I get from developing characters and becoming them, The Pharmacy is about watching someone you love in pain and not being able to free them from it. Particularly, in the sense of addiction. Watching someone die slowly from addiction is hell. The beautiful creatures developed represent ‘inner demons’. There is the sinister, the protector, and the trapped characters that expose themselves while the CrowJane that everyone sees on the outside is contained in a little white room in mental insanity with bloody pills. On the less personal side, it derives from my fear of pharmaceutical companies having too much power. Taking a drug to fix our problems isn’t always the answer and can lead people to be enslaved by wealthy pharmaceutical companies. The hard truth is, that not every person involved in modern medicine has your best interest in mind. You’re just money in their pocket or a research guinea pig.“ *CrowJane

Mater Dolorosa, “Our Lady Of Sorrows”, the incarnation of Mary pierced through the heart with seven swords, is a fitting title and matron for the solo debut of CrowJane. LA Punk Legend Paul Roessler (Screamers, Nina Hagen, 45 Grave, Deadbeats), after becoming close friends with CrowJane while recording her band Egrets On Ergot, could see that she was in the grips of the kind of crushing woe that’s so often the seed of hard-won transformation. Suspecting the rewards that awaited if she would risk shining a light on her own murk, Roessler took matters into his own hands, and all but locked her in his studio, Kitten Robot.

CrowJane helped bring Egrets on Ergot local acclaim, became Sally and Nurse Heather in the twisted cabaret of The Deadbeats and most recently, the unhinged frontwoman of quizzical LA sonic terrorists, Prissy Whip, whose “Swallow” LP Roessler also recorded and mixed. Using music and a deepening connection to life’s unseen component CrowJane has spent the last several years building and rebuilding better versions of herself from the ash of shed skins. The 10 songs on Mater Dolorosa almost perfectly mirror and chronicle this long ascent towards wholeness. Coming from a visual art background of surrealism and horror, she has simultaneously built a career as a professional horror effects makeup artist.

This unlikely background helped foster an outsider musical sensibility that is perfectly balanced by an encyclopedic knowledge of the byways and back roads of punk and deathrock, both historic and in LA’s contemporary underground music scene, of which her bands have been an integral component for the past 10 years. As a part of these utterly distinct and uncompromising bands, she has developed a reputation for shattering expectations, both in her choice of collaborators and her contributions to the collaboration. Although this pedigree informs the haunting tracks on this solo debut, those familiar with her explosive and provocative live performances will likely be blindsided by the soft vulnerability and nakedness of Mater Dolorosa, the arrangements of which allow her no place to hide and nothing left to do but forgive the past.