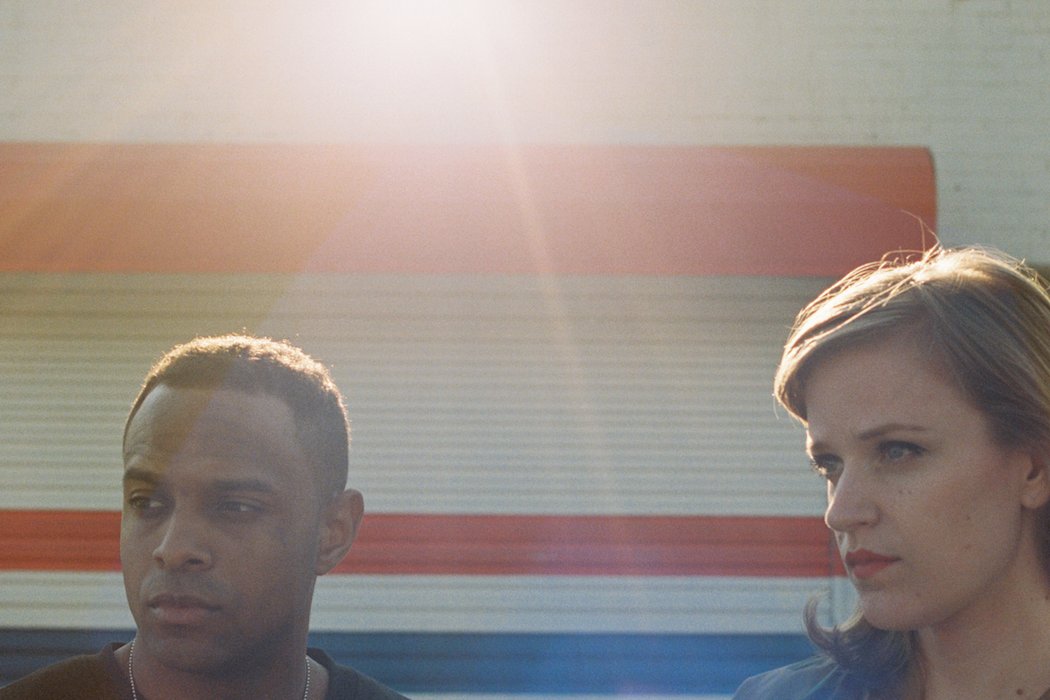 An interview! Lina, Simon and Klas are Blänk, a trio that all have a different musical background which comes together to form the perfect blend. Without going too heavily into defining genres Blänk have strong hip hop and R&B influences that are teamed back with touches of indie pop. Never intentionally focusing on what genre they would like their tracks to lean towards they go for the do what you feel like approach saying that “we just want to make good music.” Their latest album ‘Only Built For Northern Lights’ is out now with a freshness and soul that makes this album truly unique. A mix of sexy and sweet with a nod to Blänk’s Swedish heritage there is a truth that resonates throughout their lyrics.

KALTBLUT: Who is the makeup of Blänk?
Blänk: Three individuals with roots in Northern Sweden. Lina is our lead singer and guitarist, Klas is the producer and master architect behind our sound, and Simon is a rapper and poet.

KALTBLUT: Your latest single ‘Grip It’ has a certain sexually seductive side to it… Can you tell me the story behind this track?

Blänk: We felt like getting a bit dirty, but we wanted to keep it fun and playful. So we spend the whole song saying, “I want to fuck you, and this is how I would fuck you” without using explicit language or being disrespectful. The song starts with Simon asking about a woman’s favourite breakfast foods as an invite to sex, “in the event you’re interested.” That part is important. Consent is sexy.

KALTBLUT: Can you describe your lyrical process? Do your lyrics come from a personal place and life experiences?

Blänk: Our lyrics definitely come from a place of truth in all three of us. The topics surround love, self-awareness, angst, social commentary, and life lessons from our collective (almost) century of living. The process is a bit like our approach to our sound – do what feels awesome, try things, and have fun. Sometimes we bring in writers or friends to help us with concepts or melodies, and then we collaborate on lyrics from there. Or Simon writes an entire song in a manic episode and Klas and Lina help reel things in. We do a lot of revising.

KALTBLUT: What do you get up to when you’re not making music?

Blänk: We all have careers outside of music, so that takes some time. Lina is a mediator and manages one of Sweden’s biggest R&B acts; Klas is a journalist and a writer; Simon is an amateur boxer and advertising account executive. Aside from that, we like Yoga, vegetarian food and doing self-work.

KALTBLUT:  Where there any challenges in putting the new album ‘Only Built For Northern Lights’ together?

Blänk: Certainly. Simon spends most of his time in Atlanta in the US, so we’re not always in the studio together when we create since Klas and Lina are mainly in Stockholm, Sweden. It can be tough having to send files back and forth, co-write via Skype or email, and sometimes create in solitude. And of course, three people in the group with different backgrounds means three perspectives on how things should sound. We’re generally on the same page, but sometimes we have to compromise. That’s also a great strength though, because we keep pushing each other to be better and find new ways to be creative in genre-bending ways.

KALTBLUT:  Who has been an influence for Blänk in a musical sense?

Blänk: The indigenous Sami people of Sweden have a style of music that’s very melodic, mystic, and melancholy. Klas is of Sami heritage which is why a trained ear might sense some of those influences in our sound here and there, but the Sami inspiration is more in our approach, creating songs that tell stories of who we are as humans. Of course we also have contemporary influences, like Kanye West, Drake.

KALTBLUT: What was the reasoning behind your three year gap from EP ‘Áurinko Rising Again’?

Blänk: Some of the challenges we described with not always being in the same part of the world definitely played a big role. When you’re not creating together, it can take a bit longer. We also wanted to make sure we did things right. A major label backs most artists with our track record, but since Blänk is an independent act we don’t always have the same resources. Since we’re doing so much heavy lifting ourselves, working on an accelerated timeline can be a challenge. But the payoff is that we own all of our music, nobody tells us how to sound, and we don’t have to adhere to some bullshit manufactured image someone else created for us.

KALTBLUT:  Do you have a guilty pleasure?

Blänk: Ice cream. We’re all generally healthy, but ice cream is like over-the-counter happiness medication so we have periods where we consume it with no remorse.

Blänk: We’re hoping to share our music with people through lots of gigs in the summer and fall, and in the meantime we’re also working on our next album. We’ve hit a stride. It won’t be another three years this time.

Blänk‘s ‘Only Built For Northern Lights’ is out now!