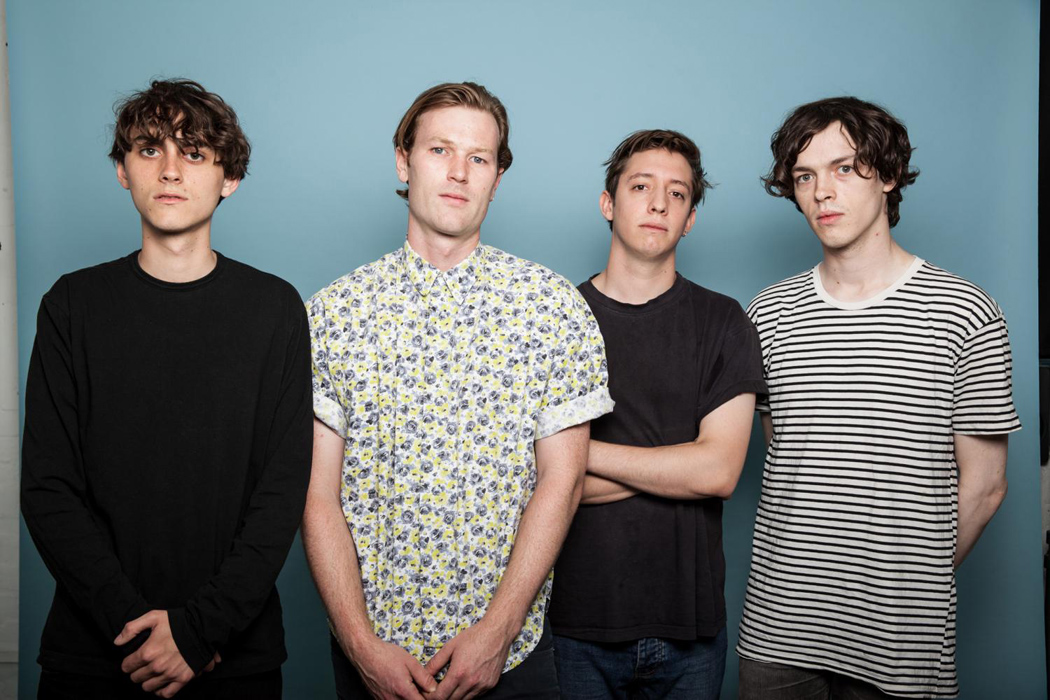 2014 was a big year for Gengahr performing a bunch of shows around the UK and Europe and it doesn’t look as though they’ll be stopping to take a breath anytime soon. With a persona that matches their musical voice, Gengahr’s sound has a softness and vulnerability that produces a feel good vibe.

With their name coming from their favourite pokemon it’s obvious these guys don’t take themselves too seriously. Although, this ideal doesn’t cross into their musical process with an energetic attitude to go back with their hazy guitar-pop melodies. Having just finished touring Europe and the UK with Wolf Alice and Alt-J, Gengahr are now set to release their debut album in May.

KALTBLUT: For those who don’t know you how would you describe your sound and where did it all start for Gengahr?

Gengahr: We didn’t really know exactly what we were doing at first to be honest. It all started with some very crude bedroom recordings which we worked on in the rehearsal studio until everyone was equally happy and excited. Our sound is fairly hazy and soft but we also have a thunderous side to us as well. I think we still have a little punk left in us deep down and it occasionally rears it’s head.

KALTBLUT: You’re on your tour with Alt-J and Wolf Alice… How is it all going? Any crazy stories?

Gengahr: It was an amazing tour and we had such a great time. One of the more memorable nights was at a tiny pub Offenbach when we were all enchanted by a very elderly German man singing folk songs on an old Casio and occasionally belting out a few wobbly notes on the trombone. He was an absolute legend. Also I got to play some ice hockey in Switzerland! That was a real blast.

KALTBLUT: What has been a stand out gig for you so far?

Gengahr: I think I’d have to say Glastonbury for me has been the most meaningful. It really was a dream come true for me. The crowd were really cool and it’s the first time i had ever seen people sing along to our songs. It was really special.

KALTBLUT: You’ve got a lot of gigs and festivals that you’re playing this year do you feel 2015 is going to be a whirlwind year for Gengahr?

Gengahr: I hope so! Last year was insane for us. We played almost 100 shows I think and it really helped us get our act together and focus on what we want to do with our lives. I guess the difference now is that last year there wasn’t really any pressure as no one knew who we were and maybe this time round there will be be a little more expectation.

KALTBLUT: How would you describe your musical process? Is there someone that works mainly on lyrics or is everything divided between the band?

Gengahr: I always write the lyrics but I don’t always start the song off. We are very collaborative when we write and everyone brings ideas to the rehearsals and we put the music together as a group.

KALTBLUT: Can you tell how London has influenced your music?

Gengahr: It’s not really something i’ve thought about too much If I’m honest. We actually didn’t want to be affiliated with London when we first started out. We jokingly set our Soundcloud location as Devil’s Lake, North Dakota as it sounded like the most made up place selectable. We wanted everything to have a sense of fantasy and thought the whole ‘cool London band’ thing was getting a little tired. That being said I do LOVE my city.

KALTBLUT: Who is on your playlist this month?

Gengahr: Kaytranada! He is dope, If you don’t know him then stop reading this and go and check him out!

KALTBLUT: Is there a personal story behind the single ‘She’s A Witch’?

Gengahr: I think all of my writing tends to start with something real and then I do my best to adapt the story and disguise it as much as possible until the original thought is almost impossible to see anymore. There was a girl though, yeh…