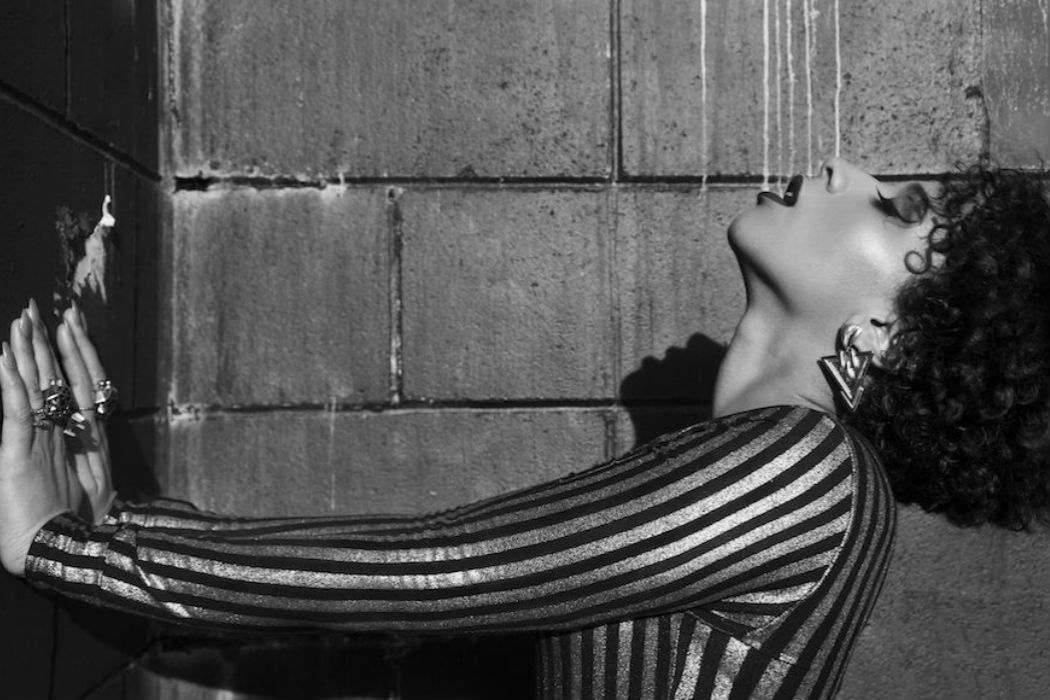 Pop artist Iman is a rising star in the next generation of promising British talent. London based, with Middle Eastern and African heritage, the singer blends silky neo-soul tones with an electro-pop sound. A modern twist on classic RnB style, her latest few releases “Golden” and “Naive” are  reminiscent of Jill Scott’s vocals, while her lyrical balladry is a tribute to Lauryn Hill’s younger days. New single “Naive” reveals a vulnerable side to Iman, that is reflected in the music video released alongside it. Her writing is candid, and her songs open and uplifting – definitely one to ease you into sun drenched summer evenings. Having written for Ed Sheeran and Kanye West, where she collaborated with producer Mike Deen, Iman is making a name for herself with her fresh and original sound, not to mention gathering a solid following on her SoundCloud account as well going on tour with Rudimental. Her songwriting talent is complemented in her latest hit by producer Robert Rosiji, who magnifies her sultry voice with glassy, echoing synths and shuddering beats.”Naïve” is about following your voice regardless of the naysayers. Honest lyrics, raw vocals and a distinctive writing style truly make Iman one to watch, and a follow up remix of the track by M.A.X had just been released. KALTBLUT had a chat with the singer to find out what’s next in store for her.

KALTBLUT: Which artists have had a lasting impact on your music?
Iman: One of the tapes I was given was Whitney Houston’s The Bodyguard album. I reckon she was responsible for a lot of people wanting to then go on and sing, like me. I admire strong women such as India Arie, Lauryn Hill, Jill Scott, and Tracy Chapman. The Spice Girls too – granted they didn’t have the strongest vocals or ‘deep’ music – but I liked the boldness, unity, fun, and strength they brought to the table. Their song melodies are still instantly recognisable.

KALTBLUT: What inspired you to start singing and creating music yourself?
Iman: I was always singing as a kid way before I realised I could actually sing – I just liked the feeling of it. The best way to describe it I guess is that I was making sounds and hitting the odd note, I knew that much. It’s only when I randomly sang something in front of a school friend and she was like, ‘You’ve got a great voice’. That’s the first time I started to think ‘Ok, maybe I can sing, and it’s not just me imagining I kind of can’. I definitely like to be involved in every step of the way, making sure the sounds and arrangements we go for are right for the song, and true to me. It’s important for me to be involved all the way, right through to mixing, mastering, creating the visuals, to how I then go ahead and put it out.

KALTBLUT: How would you describe the feeling and energy of the lyrics you write?
Iman: Every song is true to how I was feeling at the the time of recording. I have a rule and that is; if I wouldn’t say it in a conversation, I won’t have it as a lyric. I try to be positive even in some of my sadder songs, by making sure at least one of the verses has something uplifting in it, be it lyrically or musically. Each of my songs are not typically the same in terms of sound though. Overall, right now the music I’m making is pop with soul/electronic elements, but I like the production on each of my songs to be a little bit left of centre. I can’t stand all that bog standard singer/songwriter production. It’s too middle of the road for me. If you’ve heard “Golden” and “Naive”, I would hope that versatility comes through. It’s what I aim for with my music, and I hope my writing style and vocals are what ties it all together.

KALTBLUT: In what ways do you feel your upbringing in London has defined your sound?
Iman: I love that raw authentic British sound that you only hear in albums from artists like The Streets, Arctic Monkeys, Faithless, Akala, Adele, Amy Winehouse, and grime, especially artists like Kano. Honestly, I would love to make my album in the UK. I’ve recorded in Sweden and LA, and while I appreciate the music and I’ve so much respect for their hustle – it’s still a sound that for me as an artist, is a little too clean in the production. But that ‘rough round the edges’, raw and rugged sound I always hear in most of the genres across British music is where it’s at for me. I can feel the honesty and heart captured in the music. It’s a sound that’s always spoken to me.

KALTBLUT: What is your songwriting process and how did you compose and develop the track?
Iman: I had pre-written the first verse a few months before, and kept it to one side for the right session to come about. I was in the studio with a producer and he started playing some chords and I remembered the verse I had. It felt right to complete the writing of it, so I got on with that and then we recorded it. However I did feel that additional production was needed, so again held back, and waited for the right producer – whom I found in Robert Rosiji. I told him I was after a Massive Attack/Zero7 vibe, so we went through a few records and Massive Attack’s “Paradise Circus” came on which really helped to get us on our way. “Naïve” sounds nothing like that record, but it definitely helped get the creative flow going.

KALTBLUT: How did your work with Kanye West’s producer Mike Deen come about – and what has it been like working amongst him and other artists like Ed Sheeran?
Iman: I booked a ticket to LA just to see what could come of it, and I happened to meet one of Kanye’s engineers. I played him some of my demos and we did a few writing sessions. He was in London a couple of years later and I got an email asking if I could come down as they needed artists that could write. I turned up and realised it was for a Kanye project. As for Ed, writing with him was brilliant. We had four hour long sessions and wrote two songs. He is an absolute talent – and truly a super cool guy.

KALTBLUT: How did you find touring with Rudimental – and what has been your experience of performing live?
Iman: I had always heard interviews with artists saying performing live had them buzzing and I never quite got it. Up until then I only ever did really small shows – which I loved, but I wouldn’t say I ever felt that buzz. It’s only when I performed with Rudimental that I truly understood that feeling of elation. You’re doing something you already love, and sharing it with a whole load of people that are just as excited as you. I’m pretty sure it can be addictive! Perfoming live to thousands of people had me feeling high for days on end after a show. It was amazing.

KALTBLUT: Which artists are you enjoying yourself at the moment that you would recommend?
Iman: Right now I’m listening to music by Brayton Bowman, Angel, Nao, Kano’s new album, and I’m still stuck on Kendrick’s debut and Sam Sparro, who I think is very underrated. His debut album still sounds so damn fresh – and it’s a good few years old. When I’m in the gym I like to put a bit of Missy on too – SHE BAAAAD!

KALTBLUT: What can we expect from your upcoming work?
Iman: I‘m always writing new songs, and I have my next release almost ready. I’m getting my live side together and it’s coming along nicely. My main focus is just making sure the quality of the music I’m putting out is of a high standard, and I hope people can relate and be inspired by it.

Iman’s newest release “Naive” and the remix is out now