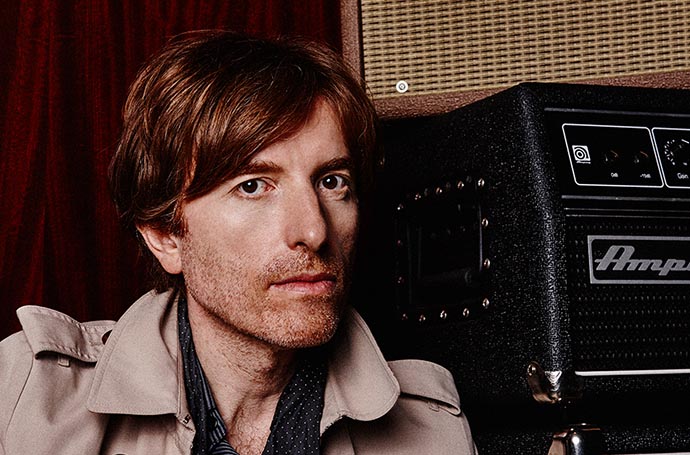 In 2010 Nicolas Godin needed a change. It was 5 years later that this change arrived in the form of his first solo album, ‘Contrepoint’. Well known as one half of the French duo Air, Godin was inspired by strong classical influences, predominantly Bach, and combined his rich pop background. With his unique and challenging sound, the result is nothing but breathtaking. We spoke to Godin about his new solo project and what drove him back to classical music. Make sure to catch a glimpse of Nicolas in Berlin on the 9th of November at Club Gretchen!

KALTBLUT: Composing an album with Bach as an inspiration shows the importance you attach to this composer.

Nicolas Godin: There are two things. On the one hand I found myself hearing every melody of songs we nowadays hear as a reminiscence of Bach’s melodies. He composed it all! He is the grammar of music. On the other hand, I once watched a documentary about Glenn Gould while I was on tour and I felt the urge to give my own homage to the well tempered piano. In contrast to Gould, I didn’t necessarily wanted the melodies being recognisable. I am happy if you can listen to the disc without thinking to Bach.

KALTBLUT: Are you coming back to classical music?

Nicolas Godin: I came to an age of I went to the end of something. This is a return back to the sources and feel newly inspired. It is quite a paradox but I stepped back to be able to move forward.

KALTBLUT: What would be your recommendation for someone who discovers Bach?

Nicolas Godin: It would be the first Goldberg variation, the Aria, played by Glenn Gould in the beginning of the 80s. It is wonderful.

KALTBLUT: We hear a lot of different languages on your record; Italian on Quie Due, Brazilian Portuguese on Clara and of course German on Wiederstehe Doch Die Sünde – it is a part of your composition “set of tools”?

Nicolas Godin: Languages are sounds and words have their own musicality. I love doing music in other languages than French or English; there are so much sounds to be explored ! For instance, on “Quie Due”, I could hear an Italian voice and a friend of mine introduced me Flavia Eusepi and we recorded. The concept on “Wiederstehe Doch die Sünden” was clear to me since the beginning: I wanted a timber confrontation like the beauty and the beast, a contrast between an evanescent and a guttural voice. I knew Dorothée de Koon would sing it.

KALTBLUT: There are lots of collaborations on this album. Is collective work important for you?

Nicolas Godin: Yes, I need to fulfill myself with other’s energies. It gives birth to refreshing ideas. In a cooperation, everyone brings its share of mystery. I have a lot of pleasure to work with other and I admire other people’s art. Thanks to music, I have been able to discover and work in other fields. Music is everywhere: like water it fills every little space and you can capture it.

KALTBLUT: Your video clips are also the result of collaborations: « Orca» was directed by Sean Pecknold and the surreal post apocalyptic « Wiederstehe Doch Die Sünde » by The Sacred Egg

Nicolas Godin: When I am done with the composition, it is very difficult to stand back from it. I was very looking forward to see what others would do with my music. It adds a new dimension to the song. These two clips delight me. Nowadays multitask artist are highlighted on the music scene. I personally think that it is a race to the bottom. When everyone focus on its own art, it brings out stronger ideas and more quality work.