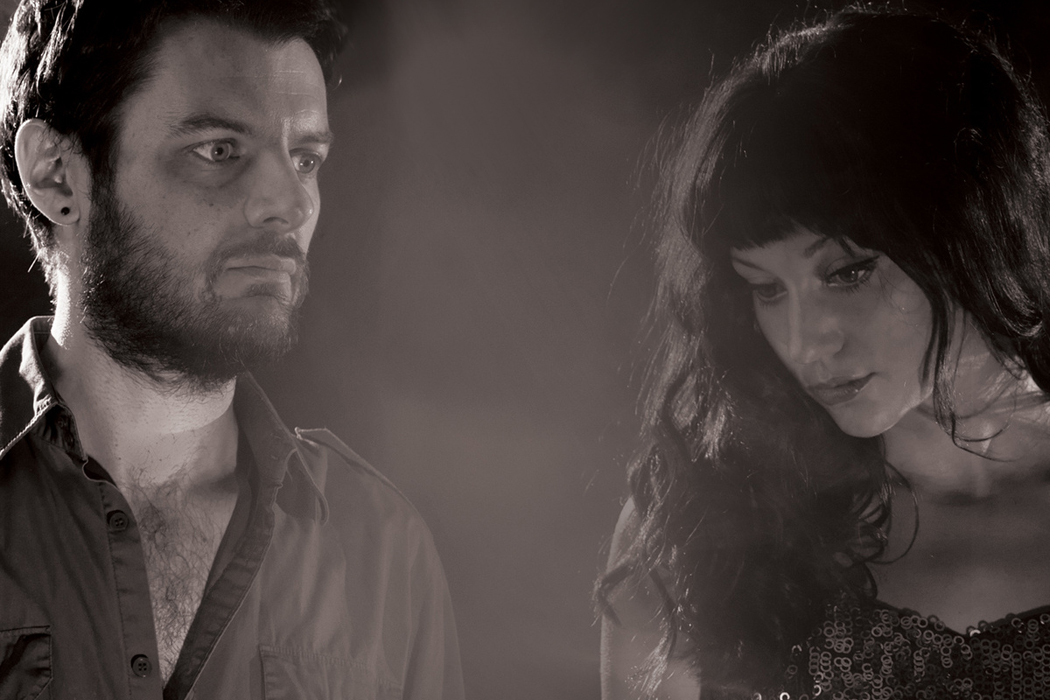 Kate Bush-esque vocals set the tone for Manchester based Shield Patterns. Mystical and sensual, Shield Patterns have a dark electro-pop sound that draws you in and captures the essence of something otherworldly throughout their whole musical process. Claire Brentnall and Richard Knox are Shield Patterns and their latest EP Violet will be released for your aural pleasure in early March.

The process in which they create their music is a beautiful and natural balance between the two with Bretnall writing and delivering melodies whilst Knox works on the textures and more atmospheric side of their musical foundations. Their creativity is so solid that is inevitable the direction of Shield Patterns has taken its on an organic course that will continue to flourish. Don’t miss out on catching them on the European and UK tour which kicks off next month!

KALTBLUT: Could you tell me a bit about the experimentation process behind your latest EP Violet?

Claire: My ankles are totally knackered because I used to run a lot, so they click. So I sampled them clicking and made some beats! There are other bits of field recordings on Violet. I really enjoyed making the clarinet melodies at the end of the EP. On Contour Lines, my clarinet on Charon was pretty wild and improvised, so I liked taking a more structured approach and carefully layering clarinet parts to create something more flowing and melodic. We played this live at Union Chapel in London recently which sounded nice and full in the gorgeous building.

Richard: I feel we create in quite a unique way, in that we hardly ever work together in the same room or sit down and improvise new ideas. There’s a lot of sharing sounds and beats back and forth, destroying or manipulating what one another has built and that brings something new each time. Each element of the piece is experimented on in some way, taking what is essentially a sort of pop song and putting on a rack and stretching it as far as it will go.

KALTBLUT: How do you feel your sound has evolved since your previous album Contour Lines?

Richard: It’s evolved in a very natural and organic way. The atmosphere of the new material is similar but I feel there’s a slightly more minimal, bleaker side to the production. Claire is constantly writing new music and because of that everything feels quite seamless as there are no huge gaps between working on new material. We placed a couple of the new tracks in the live set on the last tour and they held up quite well, the writing process was pretty much the same as with Contour Lines and the past year has been very busy with touring and being heavily involved with the album so this new EP is very much part of that same process.

KALTBLUT: Your music is an eclectic mix of dark electro-pop… Would you say you have a certain dark side to yourselves?

Richard: I almost always veer towards what you might deem ‘darker’ arts. It must be the way I am wired, I don’t know any other way. Claire is so good at writing melodies and she is much more musical than I am in a traditional sense. My strengths reside in textures and atmospheres and sounds so when the two things are married together it forms a really interesting result. Claire also has a great ability to surprise me with some really heavy and intense sounds sometimes. She just worked on a remix for Dutch Uncles and I was blown away by what she created with that. It was exactly the way I would have approached the remix!

KALTBLUT: Do you feel Manchester has influenced your sound in any kind of way?

Richard: Not massively. It’s an influence in terms of the people we are surrounded by but I wouldn’t say the city itself informs what we write. I feel like we would make the same music wherever we were based.

KALTBLUT: The intensity of your sound mixed with Claire’s Kate Bush-esque vocals team together to create something truly magical and unique… As a duo could you explain your musical process?

Claire: As Richard mentioned before we tend to work alone. Perhaps I will make a melody or a beat, then pass it to Richard and he will add drones, beats, or vice versa, and so on. It tends to be a process of passing music back and forth between us. We then work on the production together. The majority of the songs on Contour Lines, I wrote alone.  The music usually comes first then I write the lyrics and vocal melodies based on how the music makes me feel, or what sort of ideas it conjures in my mind. Violet was a bit more collaborative in the actual writing process, but still we tended to be alone when actually working! It’s really nice this way! We both create something, then come together to let it transform. We approach making music in quite different ways, so it’s always exciting to see what the other will come up with.

KALTBLUT: You’re starting your big European Tour… What can we expect from one of your shows?

Claire: We strive to play as many of the elements as we can live. There are no laptops on stage which is something we decided on pretty early. We have a lot of gear and a lot of wires. There are many pads and triggers for making the various sounds and beats, we have some programmed longer drones and bass parts but some of this is essential as each tracks contains between 30 and 50 individual sounds so it’s impossible to be able to play every detail live. It can be quite an intense experience at times which is wholly intentional.

KALTBLUT: You’re debut album was only released in June last year. What was the idea in bringing out your EP Violet so soon after the album?

Claire: I guess we just like making music and we work pretty fast! I loved making Contour Lines, and more music kept coming, and these four songs we felt worked well together as an EP. We are making music most of the time and have a bunch of songs that I’m excited about that may go towards a new album, we’ll see!

KALTBLUT: When you’re not making music what do you guys get up to?

Claire: We spend most of our time together! We live together. We laugh a lot! We walk and go to the pub and I like drawing, making art and reading.

Richard: I run Gizeh Records which takes up a lot of time as well as managing the band and booking the tours… we’re very self-contained in that way. I very much enjoy cycling in my spare time too.

KALTBLUT: Do your lyrics come from a personal place and are they shared between the both of you?

Claire: The lyrics tend to be personal. I really like playing with words and phrases and ideas. I like to write in a kind of stream of consciousness and begin to form ideas around thoughts, feelings, things that have happened. Sometimes I’ll do lots and lots of versions of lyric ideas. The lyrics in our songs tend to be very inward looking, which can be a form of catharsis.