Fetishizing Bodies! Erwan Vivier lives and works in Rennes, Brittany. He is 40. So far, he has participated in some exhibitions in his city and also in some private galleries. In 2011, he was rightfully awarded during the European Festival of Nude Photography in Arles.  A major exhibition ensued. Having traveled in Europe and the USA, and fascinated by the 50s and 60s, the underground cinema of David Lynch and Dennis Hopper, he creates most inspiring nudes and portraits. 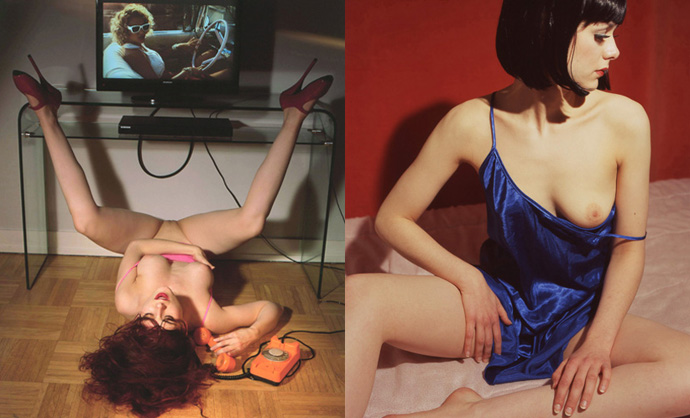 KALTBLUT: How did you start taking photos?

Erwan: I started doing photography in 1998, after having finalized the painting and drawing. My father was a photographer and he gave me my first Nikon. There were books and Jeanloup Sieff, Helmut Newton, Guy Bourdin and also by Bettina Rheims. This was impregnating for me and their work made me develop a passion for photography of women …

KALTBLUT: Do you like to work with friends or strangers better?

Erwan: I work mostly alone with my model. Except for portraits: friends or strangers, it depends. There must be a good feeling.

KALTBLUT: Are you working on something right now?

Erwan: At the moment I am preparing a work on the body fetishized by using some alternative processes: abrasion, scratching negative … It is a long work on memory and the passing of time, eroticism and death, and naturally fetishism.

KALTBLUT: What’s your favourite camera to use?

Erwan: My favorites are my old equipment housings forever! Two Nikon, Mamiya RB67 a Rolleiflex and a 6X6. 4X5 inches and room too. I do not do digital. Interview by Emma E. K. Jones