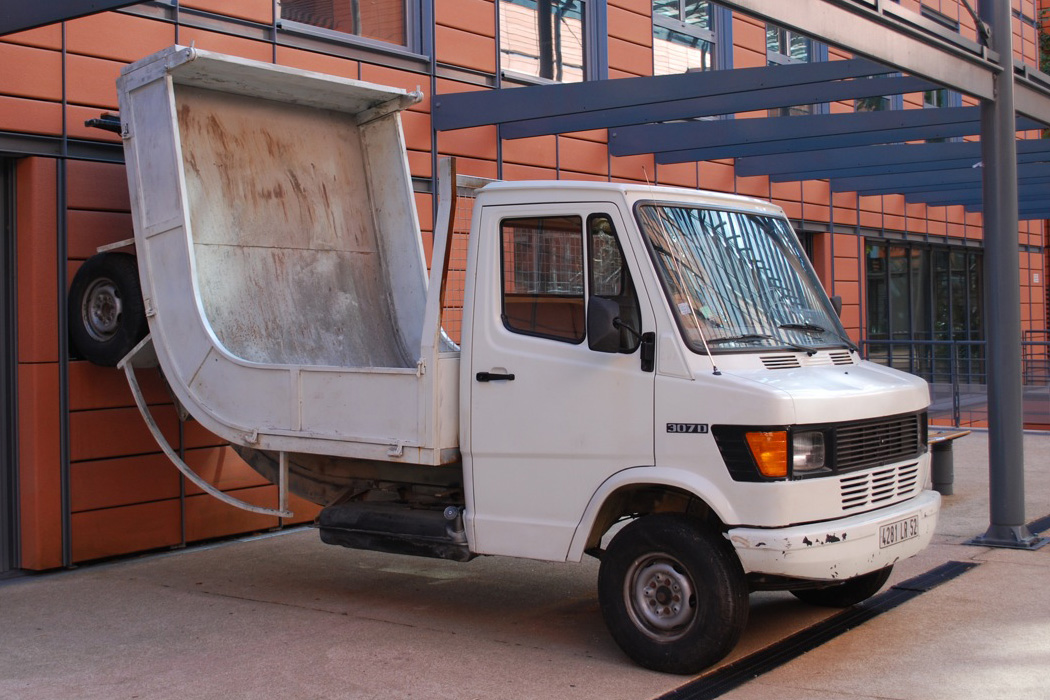 “I often use humour as a tool to bring people closer”. Erwin Wurm, the man who swallowed the world digesting nightmares before they ever reach humans and spewing out grotesque installations, marvellous sculptures and fantastic objects of spatial art and architecture that all have one thing in common  – they make us laugh! He created the world for himself. The world that may only exist for Erwin Wurm, however, the world many of us wish to live in. Laughter, humour and wonder –  an  enlightening experience we deliberately enjoy when entering his whimsical space of  art!

Austrian born Erwin Wurm is known for his humorous approach to formalism. By introducing wittiness and sarcasm to his work, he attracts not only to the elite but also much wider general public and the media. Erwin Wurm is considered as the leading living artist not only in his home country but regularly ranks among the top contemporary artists of our time in international art listings. Since his One Minute Sculptures series his work boomed in popularity enormously.

KALTBLUT: Fat cars depicting puffy, obese, life-size sculptures of cars that bulge like overfilled sacks, square headless bodies, bananas sticking out of the human body, or pencils growing out of nose, mouth and ears, you create surrealist universe embracing the banal and the absurd which you easily and wittily turn into a natural situation. Do you consider yourself a humorous person in your everyday life?

Erwin: Let’s say I am not too dry. When I use humour I call it cynicism in my work. It makes me able to address certain problems in our society, to put a mirror in front of the people. It is interesting how people see themselves in not particularly strange positions but strange habits. They think it’s ridiculous but it’s our lives. That’s what makes them laugh.

KALTBLUT: We are all actually two people, you once said. What do you mean by that?

Erwin: We are mostly two people. The ‘one’ who is really us and the ‘other one’ who we pretend to be or what we want that other people think we are. Everybody has two sides, some have even more…

KALTBLUT: You de-construct darker aspects of human nature in a humorous way. What is your personal dark side, or the other ‘self’ in you?

Erwin: As I said everybody has dark sides, I think. Anything is possible in the mind of a person. Social conditioning to a certain society however gives us the rules to do or not to do certain things and gives us the feeling of right and wrong. It sets the moral standards, which is very important.

KALTBLUT: You are known for your critical approach to Western society. Your art work has to do with the ‘Zeitgeist ‘and the icons of our time and society. Common themes in your work include not only our relationship to banal everyday objects, but also philosophers. How do you manage and cope with life?

Erwin: Well, I cope with life pretty well. I fight for my work which means that I work a lot, trying to bring the pieces to a certain level of quality that I think is good and then I am satisfied. But sometimes I have doubts like everyone else has and very often I come to a discontent.

KALTBLUT: Narrow House is one of the icons of your art work. An exact copy of the house you grew up in, reflecting the mentality of Austria during the post-war period. This piece was inspired by your childhood and mirrors the limited view of the people that surrounded you as well your psychological state of being, in particular the tension and claustrophobia  your were experiencing on a daily basis. What was it like for you to grow up and how did it influence you?

Erwin: For me growing up there was very normal, I didn’t know anything else. When I look at this time now, I see a very specific behaviour and manners, the way of living in a conservative and restrictive society. At the beginning of the 50’s and 60’s, before the revolution of 1968, you had an old and conservative society deeply wounded by the two World Wars, by big losses, not only on a personal, cultural but also nationwide level. The countries and their people were experiencing lot of heavy and serious issues which made many people adhere to certain intense ideologies and belief in economical and scientific progress. From today’s perspective, our stand towards this period of time had changed a lot. We are critical of most of the things of that period. Therefore Narrow House reflects a certain society and a certain time when I was growing up in the house of my parents.

KALTBLUT: What’s the best medicine against the narrow-mindedness of the people? Your art?

Erwin: I don’t believe that art has such a power to change people. With art you can just put needle dots and stitches and try to propose a certain perspective on a certain reality which makes people think. The art is not politics and it cannot change the world.

KALTBLUT: Where do you get your inspiration from and how do you apply it to your art? What makes you creative?

Erwin: It is a certain tension and feeling of running. I have to run against my time or with my time. It makes me see a lot of things, think about the things and combine and bring them together. It’s probably a gift that I got to have constantly something to do, to invent and create.

KALTBLUT: What are you currently working on and where can we see your art at the moment?

Erwin: Right now I have an exhibition at the Wilhelm-Lehmbruck Museum in Duisburg. The next show will be in Bratislava at the end of the year at the new Kunsthalle. The next two and a half years I will have 14 solo shows in international museums.

KALTBLUT: Do you, yourself, collect art? Is there anyone from the young artists who blew your mind recently?

Erwin: Yes, some of my former students make an excellent work. For example, Angelika Loderer, Markus Hanakam and Roswitha Schuller as well as Thomas Genzler and Kay Walkowiak.

Found On The internet: Plants On Pink

KALTBLUT: It was your One-Minute-Sculptures series that gained you public visibility and fame in the early nineties. Your ideas have infiltrated and inspired popular culture. These series even inspired Red Hot Chilli Peppers and their music video Can’t Stop back in 2003, in which the members of the band carry out five of your One Minute Sculptures, holding the pose for a minute. What is the feeling like to be a ‘living inspiration’ for people and even well-known artists?

Erwin: For a long time, I didn’t realise it but when the catalogues, which I did at that time, sold out very quickly and people started telling me ‘look you have probably influenced this artist and we have seen your ideas there …’, then I realised that One minute sculptures were a success, which came totally surprising. They were used by fashion photographers and people from the advertisement and fashion industry got interested.

KALTBLUT: If you would have the chance to exchange your art works with those of another contemporary artist, who would it be?

Erwin: I exchange with many artists, for example Francis Alÿs or Alighiero Boetti, if he would still be alive.