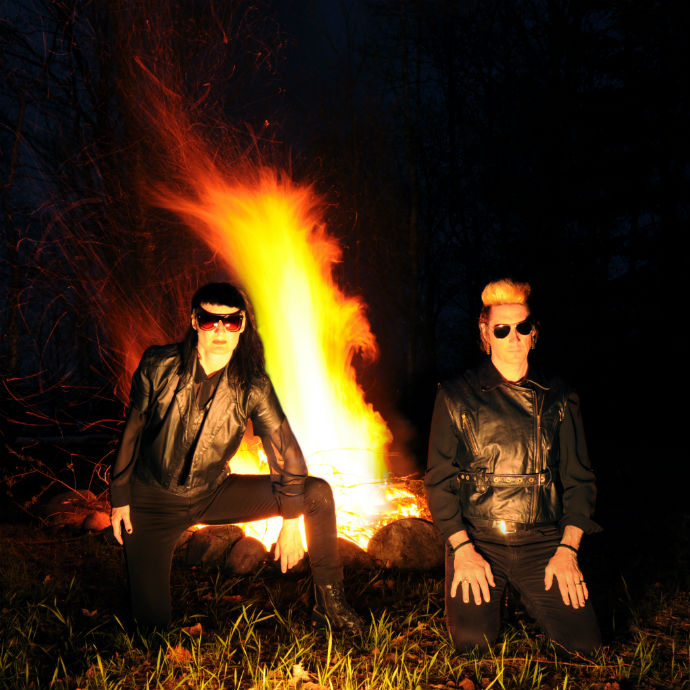 Over the course of the last two decades, Detroit-based post-punk techno duo ADULT. (Nicola Kuperus and Adam Lee Miller) have released six albums and nineteen EPs and singles across some of our favourite labels: Mute, Ghostly International, Thrill Jockey, Clone Records, Third Man Records, and their own label, the revered Ersatz Audio. November 1998 marked their first release: the five-song 12″ ‘Dispassionate Furniture’. Today, twenty years later, Dais Records releases ADULT.’s seventh full-length album: THIS BEHAVIOR. In celebration of the release, we had the chance to chat with Nicola and host an exclusive mix of hers: A Meditation in Anxiety.

Nicola: This mix was inspired by the end of a long day. You know when it is the end of the night and you’ve already worked way later than you said you were going to work and you try to relax. Try to turn your brain off. Try to stop thinking about the long list of shit that you still need to finish and you didn’t finish it, so all you can think about is how you are going to manage your time better tomorrow, so you can mark it off your to-do list, so that tomorrow night you don’t lose your mind, but of course you do.

KALTBLUT: You two have released a staggering amount of albums, EPs and singles over the past two decades – what can we expect from your new album ‘This Behavior’?

Nicola: That’s really a difficult question to answer. I feel like every time we release a new album I say “this is our best record yet!” But I truly do think this is our best work. It sounds like old ADULT. and new ADULT. and future ADULT. Anyone who follows our work knows, it is never the same album twice.

KALTBLUT: How have you seen your musical process shift? Were there new techniques or productions methods tested within your new work?

Nicola: Well, on this record, yes, our process did shift, because we left the studio environment and set up our live rig on a kitchen table and started working. So we were very limited on what we could do while writing our 23 demos for the album, which we then cut down and produced to 10 tracks.

KALTBLUT: What was it like writing and recording in a remote cabin in the woods of Northern Michigan? What made you decided to put yourself through such an intense situation? Would you put yourself in a similar position again to test the limits?

Nicola: For growth as an artist, it’s important to get out of your comfort zone. It allows chance to happen. I think after recording such an intense record 3 years ago, Detroit House Guests (Mute Records), which featured collaborations with 6 different artists, we really needed to look inward, be reclusive, private. Plus, it felt critical at that moment to get off the grid, off the internet. It’s 24/7 social media overload! It feels like we are living in a constant Front Stage Situation. So it was important to work almost in a void.

KALTBLUT: The tracks are very much focused on human behaviour and patterns – what is it about this topic that interests you?

Nicola: Human behaviour is a topic that never gets old and never becomes out of date. It’s truly timeless. After all there’s no greater topic that humans like than the topic about themselves. Humans! US! So we’ve always been interested in topics such as anxiety, fear, phobias, relationship struggles, but now I think it’s shifted a bit more to power struggles/power structures, these erratic politics and politicians, obsession with ourselves and social media, things that are absolutely so banal. Are we losing our edge as humans?

KALTBLUT: Heading back to your early roots, what genre/song/artist really made its mark on you and ultimately pushed you to become a musician?

Nicola: Some of the stuff we both enjoyed as young ones (and still today) that helped shape us not necessarily as “musicians” but adults – PIL, Cure, Dead Kennedys, Crass, Rudimentary Peni, Nitzer Ebb, Cab Voltaire.

Nicola: Terrifying. I kinda feel into the deal! The first show was in Berlin, at Sophien Club, probably no longer exist. Adam had a project at the time ARTIFICIAL MATERIAL. The guys at Third Electric called him up and invited him to come and do 4 dates for a Germany tour sponsored by Studio K. And because of those 4 shows, that’s how all this madness began! And possibly years of piano lessons as a teenager!

KALTBLUT Do you find yourself revisiting earlier demos/music and wishing you’d changed “this or that”?

Nicola: I think there are moments that as artists it’s important to look back at the work and reflect on it in order to help you grow, but to answer your question NO. And I think obsessing over thoughts like that can get you in trouble and wear you down. If you’re not moving forward then you’re in trouble.

KALTBLUT: When was the time you thought “okay, this is our sound, this is it”?

KALTBLUT: Being one of the notable artists involved in the early stages of the electroclash movement (and a personal favourite of mine since seeing you play at Liverpool’s Korova in the early 00’s!), what has kept you two going so strong?

Nicola: You mean, unfortunately, “labelled” electroclash. And maybe that’s what keeps us going strong, the desire to make, to be undefined, to do what we want, when we want, and not give a fuck about guidelines or genres. I think we often don’t know what else we would do. We’d probably go mad if we didn’t have some form of artistic outlet. We also do collaborative performance work and have solo art practice.

I also feel it’s partially our duty, as well, to provide something different for those out there that need it. You know, that need to be feed, inspired. You know, the way you might have been inspired early on in your teens or as a young adult, that informed the path you took.

THIS BEHAVIOR is out now via Dais Records, get your copy here