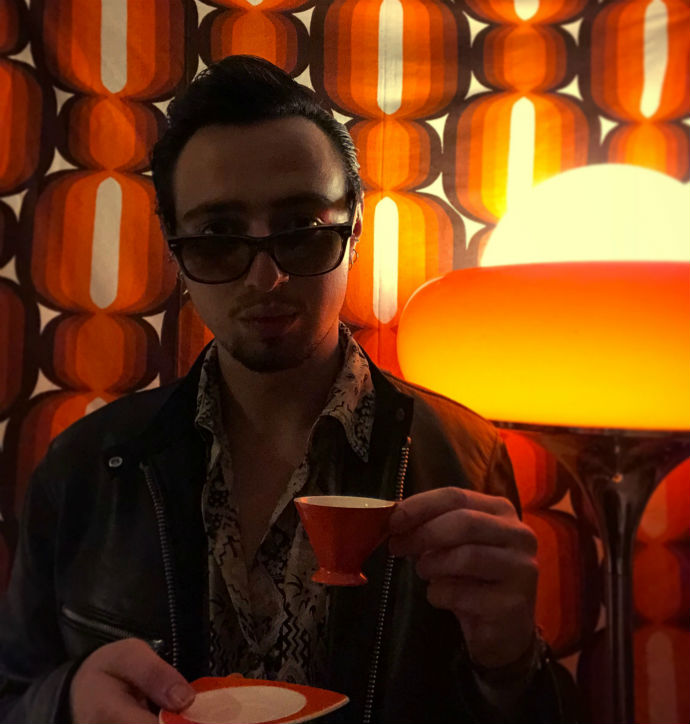 Jesús Bacalão is a DJ & Sound Artist born in Oaxaca, Mexico & raised in London. After becoming enamoured with the glorious psychedelia of Lee Scratch Perry & King Tubby’s mid-70s output, Jesús Bacalão emerged as a dub DJ, hosting a weekly all-vinyl show on SubFM with guest appearances on KMAH & NTS. In 2017, his focus shifted to producing conceptual mixes- a melange of Library Music, Exotica, Field Recordings & live drones- for visual art installations. His obsession with musical obscurities from the past inspired him to create Jesús Bacalão’s Light Entertainment Programme; A thematic mix series utilising only shellac/78rpm records & mid-century radio recordings to unearth the sleaziest of musical gems & explore the pop culture of the 1910s-1950s. Enjoy a blast from the past with Bacalão’s Atomicana 1949-1959 mix below.

Jesús Bacalão’s Light Entertainment Programme is an all shellac/ 78 rpm mix series serving up an atomic cocktail, straight from the fridge. On tonight’s programme…

The Mighty Atom became a ubiquitous player in American Pop Culture during the 1950s; omnipresent in everything from Atomic Fever induced media coverage to state-funded films waxin’ lyrical about the benefits of “the friendly atom”, as well as becoming the de facto plot device for a slew of pulp novels & sci-fi pictures. Ooh, Wee- The atom had come to town.

The Atomic Age sparked major social changes in the US, with Teenage/ youth culture becoming a distinct subculture for the first time. Unlike previous generations of Americans who came of age in times of war & depression, the prosperity & baby boom of the 1950s put significantly less responsibility on the shoulders of teens, which aided by the culture of consumerism, allowed them to wield economic power of their own.

With the freedom & long greens to express their own fashion & interests, they caught the eyes of the film & music industries who recognised the potential for a fresh market who wanted their ideals to be represented on records & the silver screen. This played a major role in shaping contemporary pop culture, with films like The Wild One & the meteoric rise of rock n roll embodying the youth rebellion.

A sense of freedom permeated through the rest of society, which coupled with a strong sense of post-war hedonism, also allowed a culture of sleaze to flourish, within pin-up models becoming household names, the ever increasing popularity of underground burlesque & stag films and after 1957, the early exploitation films that developed into the grindhouse genre over the next decade.

In no American city were these cultural changes more tangible than in Las Vegas. The Atomic Age saw ol’ Sin City shedding it’s 1940s reputation for Old West-esque ranches, replacing it with an exotic neon-drenched ambience Ac-Cent-Tchu-Ated by the futuristic allure of boomerang modern design as well as the all hours entertainment. 1951 introduced two stars that would become staples in the city over the next decade, in the form of Frank Sinatra’s first performance at the Desert Inn & the first Atomic tests at the Nevada Test Site, the mushroom clouds of which were visible from Downtown. This set the Atomic Tourism boom in motion, transforming Las Vegas into Atomic City, USA. The aforementioned Desert Inn began advertising their prized North facing rooms offering unobstructed views of the Test Site whilst bars like Atomic Liqueurs concocted top-secret atomic cocktails (The secret is— not to pour the vermouth, just to pretend you’re pouring it). The city also decided to combine two of it’s most popular attractions- nuclear bombs and showgirls- into an annual atomic-themed beauty pageant, debuting with “Miss Atomic Blast” in 1952.

Additionally, The Age of the Atom saw the city catering to the raunchier appetites of its mid-century clientele with an abundance of burlesque theatres and striptease clubs, whose salacious performances were accompanied by equally lewd exotic inflected rock n roll and steamy r&b grinds played by local bands.

The ragtag assortment of titillating tunes featured on tonight’s programme, a melange of rare cuts only available on shellac & major label hits, were recorded between 1949 and 1959 on the West Coast, Nevada and the border towns of the SW. They range from humid blues numbers- best served HOT round 4 AM at your local juke joint or fallout shelter – to raucous tittyshakers featuring sax solos so obscene, so lurid that they were probably protested by religious groups. These platters not only capture the syrupy, refined sleaze of their time but much like a crystal ball made of pomade, they also predict the greasy future, laying a foundation for the garage rock, trash rock and surf mania bands of the 60s. Now, pour yourself a Nuclear Daquiri, kick back & of course, take it sleazy…