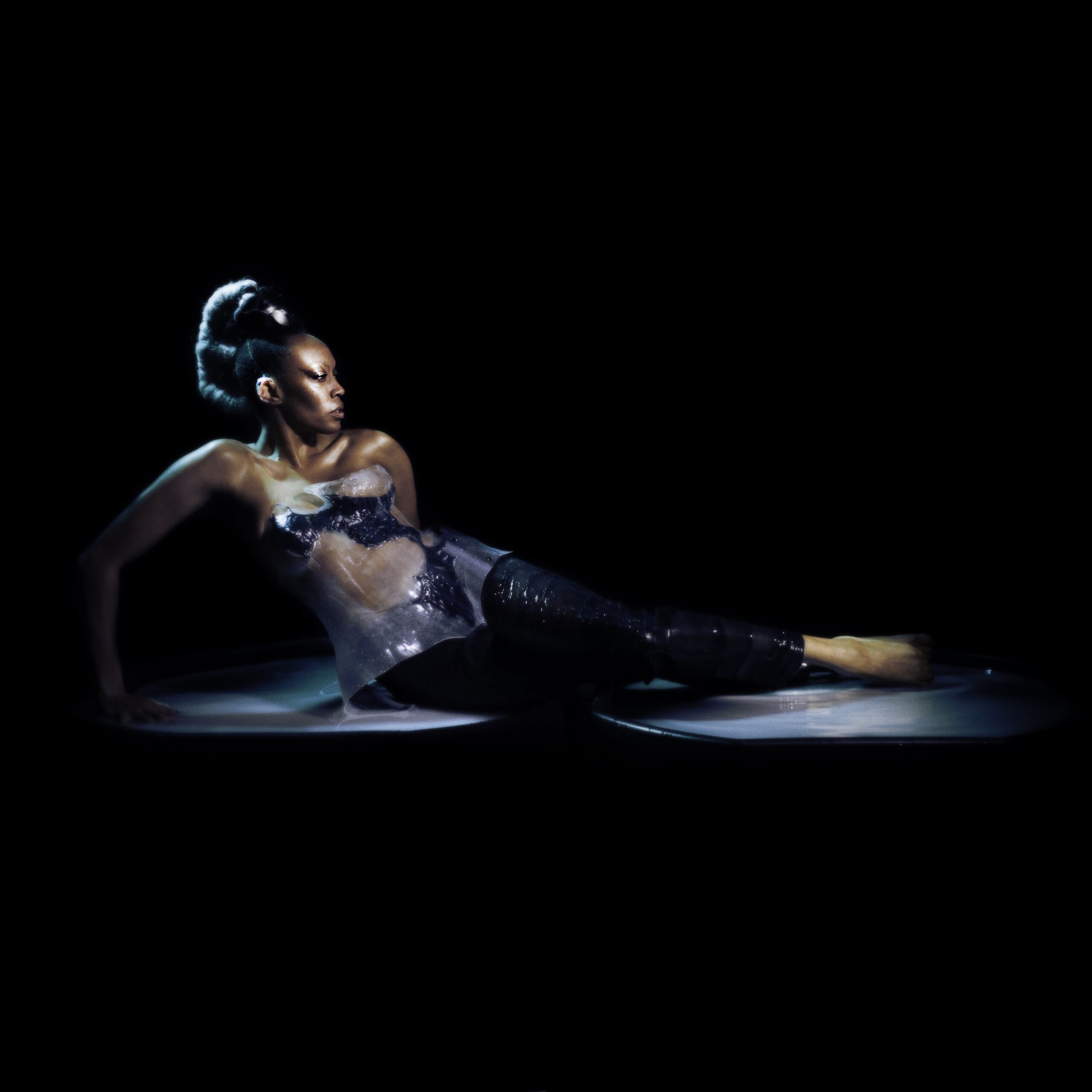 “My art meets at the intersection of technology and music, and I love pulling the two together to create a new atmosphere in the music space” – In conversation with GLOR1A

Her art explores the human connection between technology and music, with her stunning visuals creating worlds both digitally and in reality. With her work, she challenges the underrepresentation of Black females in sci-fi and myth. Her sound is so fluidly versatile that it’s impossible to box her in genre-wise and she’s constantly proven herself to be one of the most talented and futuristic artists of our time.

The multidisciplinary artist is due to release her EP Metal tomorrow. KALTBLUT caught up with her to talk about her connection to technology, her upcoming EP and sci-fi. Read the interview below.

KALTBLUT: You’ve collaborated with AARRT again for “Control”. How have those collaborations changed throughout the years?

GLOR1A: AARRT are incredible. It’s funny because I blink, and we connect again, and I see how much we are both perfecting our crafts musically. It’s such a pleasure to work with them again for this new project EP. My first ep Testify is a soundclash of ideas that they crafted into something I’m really proud of, and now with “Control”, I think we know we make emotive pop music well together. Their influences stretch from west coast hip hop, rap and drill to thicker club music which they are gaining traction for. The sticky club beats that won’t let you go. So when we come together it’s an excellent experiment to add these influences to mine experimental hyper pop, R&B, soul, sprinkled with some punk.

AARRT remixed “U Up?” A track we created for the first EP in 2019, this heavy ballroom Esque dancefloor hit is now hitting clubs everywhere which is so exciting. We hit a pandemic nearly two years ago, but the music is more relevant than ever now. Attacking and inviting.

The demo for our newest track “Control” was made in 30 minutes. I asked the guys to send me some beats for another project; I found this instrumental and was instantly in love. I was locked into the future nostalgia of the track. It made me feel like I was growing from a cocoon, being rebirthed in the middle of a 1980’s high school disco! I love when ideas roll off your tongue onto the music, touch you every time you hear it.

I want to find a way to bring audience biometric data into the performance itself, manipulating the visual aesthetic and outcome of the show.

KALTBLUT: Can you tell me a little bit about the connection/relationship between your music and technology?

GLOR1A: My art meets at the intersection of technology and music, and I love pulling the two together to create a new atmosphere in the music space. I consider myself an alien, a non-conformist who is addicted to sci-fi and the sensuality of the other. Ever since I was little, I was always fascinated with the future; could I teleport? Could I reach space? Could I live on another planet? Do aliens look and talk like me?

When I started creating the visual universe of GLOR1A i was able to explore modern technology further and its effects on human existence. From my first song “OUT“, I imagined myself locked in Area 51, being inspected by outsiders. Voyeurism and surveillance are key themes in my work.

For the past year I’ve been formulating ideas for a new stage show which creates audience interactions at a greater level. I want to find a way to bring audience biometric data into the performance itself, manipulating the visual aesthetic and outcome of the show. I collaborated last with Japanese based designer Alpha Rats to develop an online music and game environment SWARM.

This game is like a social experiment based on bee ecology to connect audiences worldwide, exploring the benefits of collective consciousness.

The audience fly through a hidden layer deep inside me, a place riddled with my DNA, my influences, beliefs and my hertiage from west africa. I tap into ancient ancestry and storytelling to create this habitat. The SWARM unlock performances and complete tasks through the game. We premiered it this year at Rewire Festival. We will develop it further to include more artists and different narrative arcs exploring the idea of future radical ancestors, creating a space for outsider artists like myself.

My relationship with music and technology is helping me carve an image of myself in the future. It gives me self-expression tools to takes risks with my art showing alternative narratives to the world. From twisted developments of coded biases in Artificial Intelligence to increased surveillance and reduction in human rights from the pandemic, we must own the narrative of our future, not big data corporations.

In 2020, i created a fantastical sci-fi story for Chale Wote Festival (Ghana) called Dark Matter Inc, which went on to be exhibited in The Rele Gallery in Lagos. The piece explores the idea of a new Black-owned capitalist structure that collect and sell Black data only. What effect would that have on modern society and Black people globally? I really like asking these probing questions in my work. This piece came from reading reports on racial bias in data and its effect on Black and brown people globally. The future projections were scary.

Simple collisions of technology and music can be found in my visual storytelling. “Juice”, a track I released last year, explored the idea of the alien with a lot of CGI. Playing with this technology, albeit subtly, it helped the director Claire Arnold expand our storytelling into a new realm.

KALTBLUT: What sparked your interest in technology?

GLOR1A: Collaboration. I love ideas of futurism, but I’m not technically savvy. I have a group of amazing people I love to tap into. They massage my thoughts and develop them. From Alpha Rats, Hervisions, Mark Gilligan and Claire Arnold. I can’t wait to collaborate with more people in future.

The world was imploding, with the death of George Floyd and rising deaths with populism all I could do was look, like, comment and post angry emojis on social media. It felt like we were walking into something a lot darker than covid, i created a concept world for me to express my fears.

KALTBLUT: You’re releasing your EP Metal tomorrow. What can we expect from the EP and can you tell me a little bit about the tracks?

GLOR1A: I’m really excited to share this one with the world. This is a new concept EP exploring technology and humanity as we live and move out of a pandemic. It was written in my bedroom at the height of the first lockdown. I couldn’t move much in my four walls, and my attention span was mesmerized by my phone and laptop. The world was imploding, with the death of George Floyd and rising deaths with populism all I could do was look, like, comment and post angry emojis on social media. It felt like we were walking into something a lot darker than covid, i created a concept world for me to express my fears. I made an alter ego GLOR1A 2.0, a black robot created by Dark Matter Inc. Her goal was to autonomously collect facial recognition data from the human race. This is the first time audiences are introduced to GLOR1A 2.0. As she sees the deluge of data on humans, she becomes sentient.

One of my favourite tracks is “Sad Surveillance”, a nostalgic electronic hip hop take on pop R&B, where GLOR1A 2.0 explores the track and trace system. Which has a new video dropping soon made in Berlin with the exciting queer Brazillian collective Limitrofe Television and friends. It was a beautiful experience working with new visionary creatives coming soon!

I love “Running Man” documenting the disconnect between young and older voters, especially in Britain with critical issues such as Brexit. I wrote this song when I heard statistics that if all Brexit votes were counted today, we would have stayed in the EU as many leave voters had passed away (due to old age).

“Control” explores the idea of power. It has so many meanings, from being a love song, a memoir, a transcript and a plan.

“Double D” is a waning track about how we entertain ourselves with the good stuff to escape. Diamonds and dick are a distraction.

“Im Sick” is a monologue of my thoughts on the 23rd October 2020. Its matter of fact approach made me feel calm, the song to me, is like having a therapy session. I recently shot this video for it in Lisbon collaborating with amazing new creatives. I spent a couple of months there this year. I needed headspace out of the UK and time to really figure out what I wanted from music. Directed by Valter Carvalho. We wanted to create a visual embodiment of the EP. Data bleeds and pretty screams with wide eyes and unengaged smiles.

KALTBLUT: Your music is a blend between several genres, is that something you do on purpose or does it come organically?

GLOR1A: I think this comes from collaborating with producers I find totally distinctive. My style is unique, and when we clash sounds, it creates something that can’t be put into boxes organically. I have been asking people what my sound is … and I get the answer “new” quite often. I think it sits on the fringes of mainstream culture. Its the drums that attracts me to the beat, it makes me feel alive, and I aim to pass that feeling onto the listeners.

KALTBLUT: You’ve worked with several artists on your EP, such as Gaika and Ikonika. How did those collaborations come about?

GLOR1A: Gaika has been a close friend for some time. He actually started my GLOR1A career by helping produce and release my first EP on his label The Spectacular Empire. He has been my executive producer from the beginning, which is cute to grow in sound and direction with him. He runs an open studio in London where talented young producers come through, and when I did a track with Poundshop (an attendee of the studio), Gaika jumped on.

With Ikonika, we had messed around with a couple of beats in the past. I was so nervous working with her at first as my music had been made in a close knit community, and I loved her productions for so long. I was basically fan girling! We decided to reconnect for the EP through a close mutual friend Shannen SP who helped me link with new producers for the EP. Sad surveillance came out splendid; it was a fun experience making that track.

KALTBLUT: Can you tell me a little bit about NINE NIGHTS?

GLOR1A: Nine Nights is a music TV and events company creating a new ecosystem for Black culture globally. We want to build a space for alternative Black art and music to thrive, taking over areas usually inaccessible for us. Its based on Jamaican wake culture, and we use it as an ethos to continue to celebrate during difficult times.

We started in June last year with marathon broadcasts of great music, in London with artists such as Keyal Blu, Tash LC and Malik Cry Cry to Berlin with Slim Solidad and Dj Stingray. With a final show to celebrate carnival culture with Disya Generation over Notting Hill carnival weekend.

This year, we are running live events, a mentorship programme, and a new live performance with the Nine Nights founders. I’m excited to see where this goes.