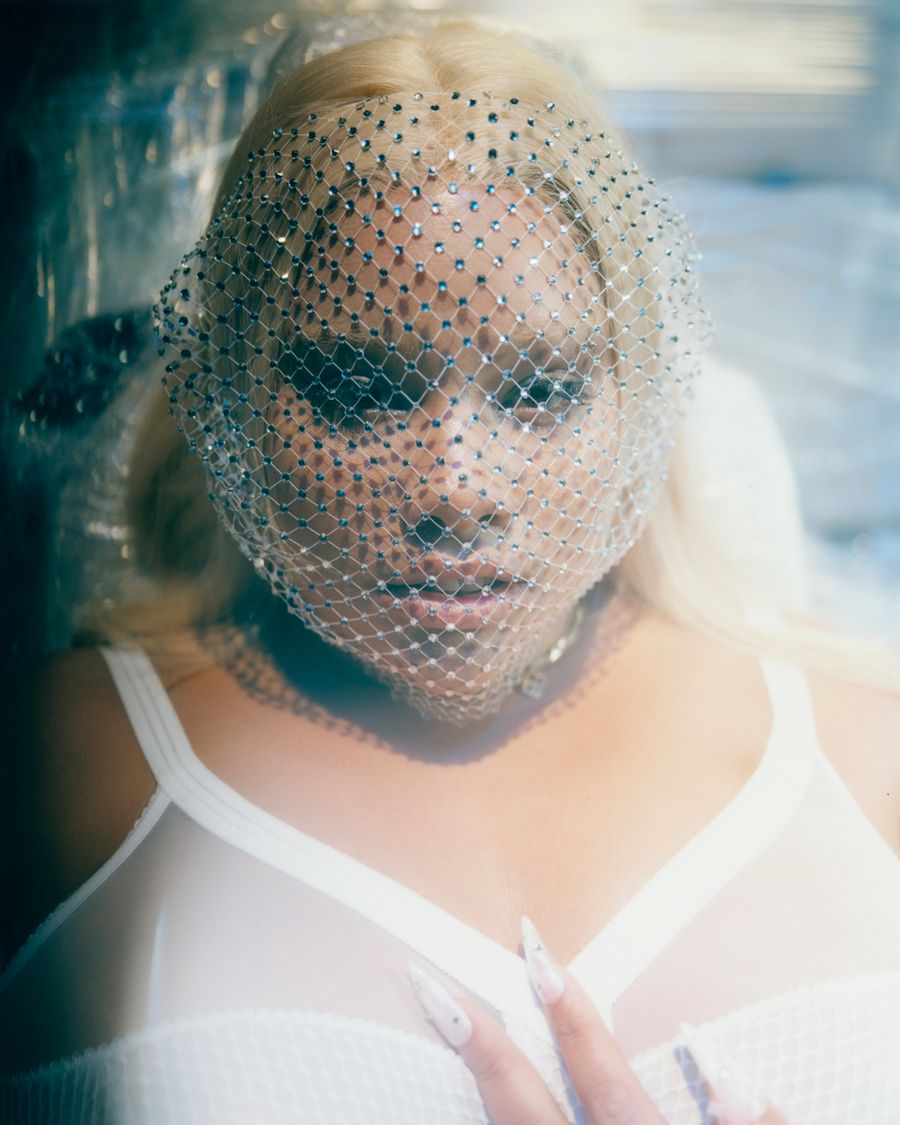 With her smooth voice and provocative lyrics, the British artist and DJ Shygirl has stolen the hearts of many already. Since having released her critically acclaimed debut EP Cruel Practice in 2018, she has released several hits and stunning visuals, including a short film collection of music videos titled BLU. Her lyrics are empowering and her persona is philosophical, while her sound is a blend of various genres ranging from Grime to R&B. In her latest release, “BDE”, short for big dick energy, which features the Northampton rapper Slowthai, her words communicate and disrupt power dynamics while the pair is cuddling up to cute bunnies in a sixties inspired music video.

KALTBLUT caught up with Shygirl and discussed her latest single, her connection to movies and if women need to have big dick energy to make it in the industry.

KALTBLUT: I’ve watched the music video to “BDE”, and I love it, but I was just wondering, why the bunnies?

Shygirl: After shooting BLU for two days, I wanted to do something fun and I wanted to have a live animal in the shoot.

KALTBLUT: Why did you decide to shoot BLU as a collection of music videos in a short film?

Shygirl: I wanted to do it like a performance because I hadn’t done any live shows for ages so I thought this would be a nice segue into performing the EP and contextualising it a little bit more and bringing it to life in a way that I have control over.

KALTBLUT: Do you draw inspiration from certain filmmakers for projects like that?

Shygirl: I’ve always been inspired by films, and I used to be a DOP before I was making music so that has therefore pretty much been a very consistent influence in my music, not just the visuals. I always imagine soundtracking, it’s just kind of how my brain is wired because film was always the medium that I came to first. But I don’t think there’s any one thing in particular that I’ve been inspired by, it’s more of an amalgamation of my tastes and things that I’ve absorbed and I’ve wanted to output again, as well as a lot of self-referencing.

KALTBLUT: And how did the collaboration with Slowthai come about?

Shygirl: Our managers sorted the collaboration out, but Slowthai and I have met ages before from when I was supporting Mura Masa and Slowthai had come to a couple of the performances. And I knew that Alex had shown him my music so when I made “BDE” with Karma Kid, he said we should get a feature on this. I didn’t usually work with a lot of other vocalists on my stuff and I haven’t released anything up until this point. I had a session planned with Slowthai so I just brought it and showed him and he said that he wanted to do something about it. It was really fun in the sense that I had already set the tone of the track, which was objectifying men and I’m talking about myself and my needs a lot without needing a partner. So he took up my challenge, which made the track really interesting.

KALTBLUT: Do you feel that as a woman you have to have big dick energy to make it in the industry?

Shygirl: Not necessarily, my friends say that I do, but I think it’s about being authentic and comfortable for what feels right for you. BDE means that you don’t necessarily have to be the loudest in the room. That’s why it’s an interesting concept because big dick energy can also be a quiet confidence.

KALTBLUT: And as a woman in the industry, do you feel that the industry has changed for the better in the last couple of years?

Shygirl: I think I have a very close view of what the industry is because I’m in my own kind of world. I’m only now like bridging into other people’s experiences or more mainstream experiences, but I’ve pretty much been able to exist separately from all of that. I work with everyone I know, I’m from a very big creative community, I don’t really deal so much with the average day to day industry routine.

I used to work in fashion, so I’m used to working with people that are existing on the surface level, but for me personally, all I can do is affect how I work and who I work with. I definitely still encounter misogyny and racism and all that on pretty much every project I do. It’s one thing to have a platform and showcase diversity, but the systems are not diverse enough and don’t offer enough support for the people that they want to put out.

KALTBLUT: In a way, it’s tokenism to look good on the surface, but not working on the core issues.

Shygirl: Exactly. It’s the same thing as when festivals are booking a more diverse lineup but then don’t have the infrastructure to deal with the issues that come with that. My DJ is gay, we’re both queer and we’ve been to gigs before where we’ve experienced people being homophobic and the festival promoters were unable to have any process to deal with it. They’re like this is a small town or whatever, but you have a duty of care if you’re going to put aside diversity to be able to deal with the things that naturally arise. And the same can be said across the board.

Shygirl: That’s the thing, I definitely feel empowered. I choose to work in this industry, and therefore I feel able to speak up for myself and for the people that I bring on board with me. The people who I bring want to work with me, they know I advocate for them and myself, because I wouldn’t want to work in an industry where I feel like I couldn’t speak up. I’m my own boss at the end of the day, so I don’t have any feeling like being reprimanded.

And that’s why I kind of lean towards “Shygirl” in the initial sense, because it’s an acceptance of a stereotype, in some ways, but making it my own.

KALTBLUT: I find the juxtaposition of your stage name really interesting, because your music isn’t shy and what I hear you saying right now in this conversation isn’t shy either. Do you see yourself as shy, or is the name more “ironic”?

Shygirl: It’s more about showcasing that you can be everything. There are moments when I’m shy and there are moments when I rise to the occasion. The whole point of it is to challenge your expectations of people. Don’t expect anything and be open to what you’re given. If someone expects me to be outspoken then that’s more when I’m reserved. A lot of people’s expectations say more about them than it does about you. As a woman, this idea of a mute demure woman has always been pivoted as the more attractive option. And that’s why I kind of lean towards “Shygirl” in the initial sense, because it’s an acceptance of a stereotype, in some ways, but making it my own.

Shygirl: They aren’t really different personas, but rather different facets of myself that come alive depending on the mood or occasion. Especially in Alias, the thought I created came through after the music. And it was more when I was looking back at the music and the energy that I had in the room at different times, what was consistent on like different shoots and projects and like how I would personify those things – it was like dissecting myself to explain myself a little bit more.

It’s so much more natural for people to be into loads of different genres, like comedy, romance, but when it comes to music, people tend to box you in.

KALTBLUT: Your album and your music in general showcases a very diverse genre pool. Do you do that deliberately?

Shygirl: Yeah, I’ve never really thought about all the music, it’s mostly just what I like. I listen to a lot of different genres in the same way that I watch a lot of different types of movies. If I just watched horror for example, I’d only make darker visuals. It’s so much more natural for people to be into loads of different genres, like comedy, romance, but when it comes to music, people tend to box you in.

KALTBLUT: Do you feel like you are boxed in?

Shygirl: I don’t think so. For example, in terms of playlisting, you find my songs almost across the board. The same song will be on 20 different playlists wildly different.

KALTBLUT: What are you currently working on?

Shygirl: I’m just working on new music, but I’m actually taking a break at the moment. But I’m always gonna be workin on new music. At the moment the design is to make an album but I’ve not got a focus on anything conceptually.

KALTBLUT: How do you approach writing new music? Do you deliberately sit down and say okay I have to write this now, or does it come to you and write down some lyrics into your notes app for example?

Shygirl: I’m always kind of writing little things down, I’ve done that even before I was making music. I’ve always just written little notes and stuff like that and then eventually I have a session planned with someone and I’ll just go through my notes and see what I’ve got as a jumping point. I don’t really I don’t like getting sent beats, I prefer to work with someone and flesh it out with them so that we’re both in the same mood. You can’t effectively write a song without having the beat there, because a lot of the way I write is focused on the words and my flow. I think that words have always been my anchor.