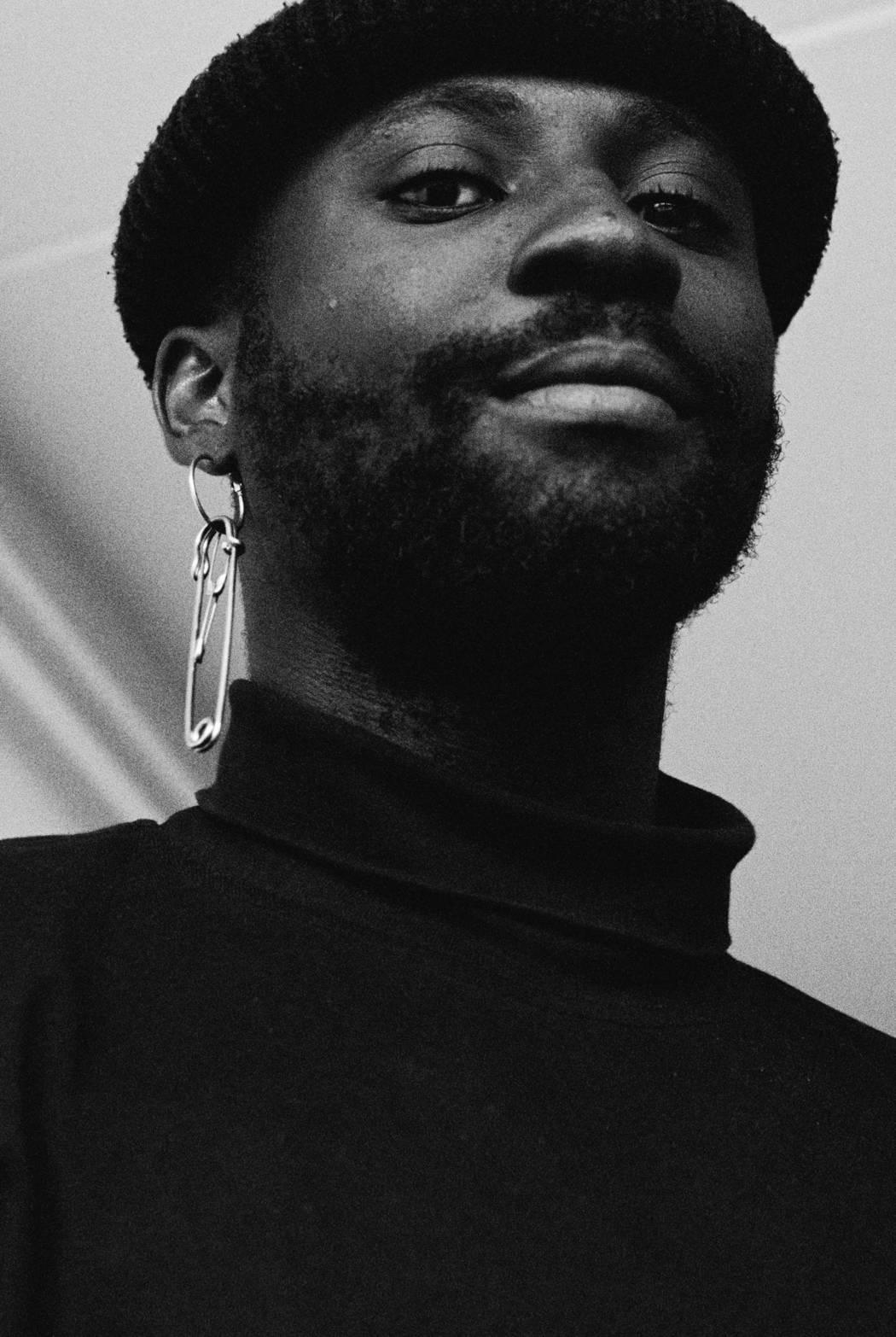 Through the eyes of eight individuals ‘Into the Night’ investigates the role of nightlife as a departure point for personal exploration. All deeply embedded within the queer club community, each of the portrayed characters recounts their involvement with this subculture and reflect on how these experiences came to be influential in their outlook on life.

In this interview + photography series the queer nightlife scene is perceived as a vital site of interpersonal experimentation; a place where those who are unable to connect with and/or conform to societal standards can find acceptance and encouragement. Shot during pre-Covid times, the series only underlines the necessity for the now largely absent club culture even more. It serves as a reminder of the things we can find on sweaty dancefloors. 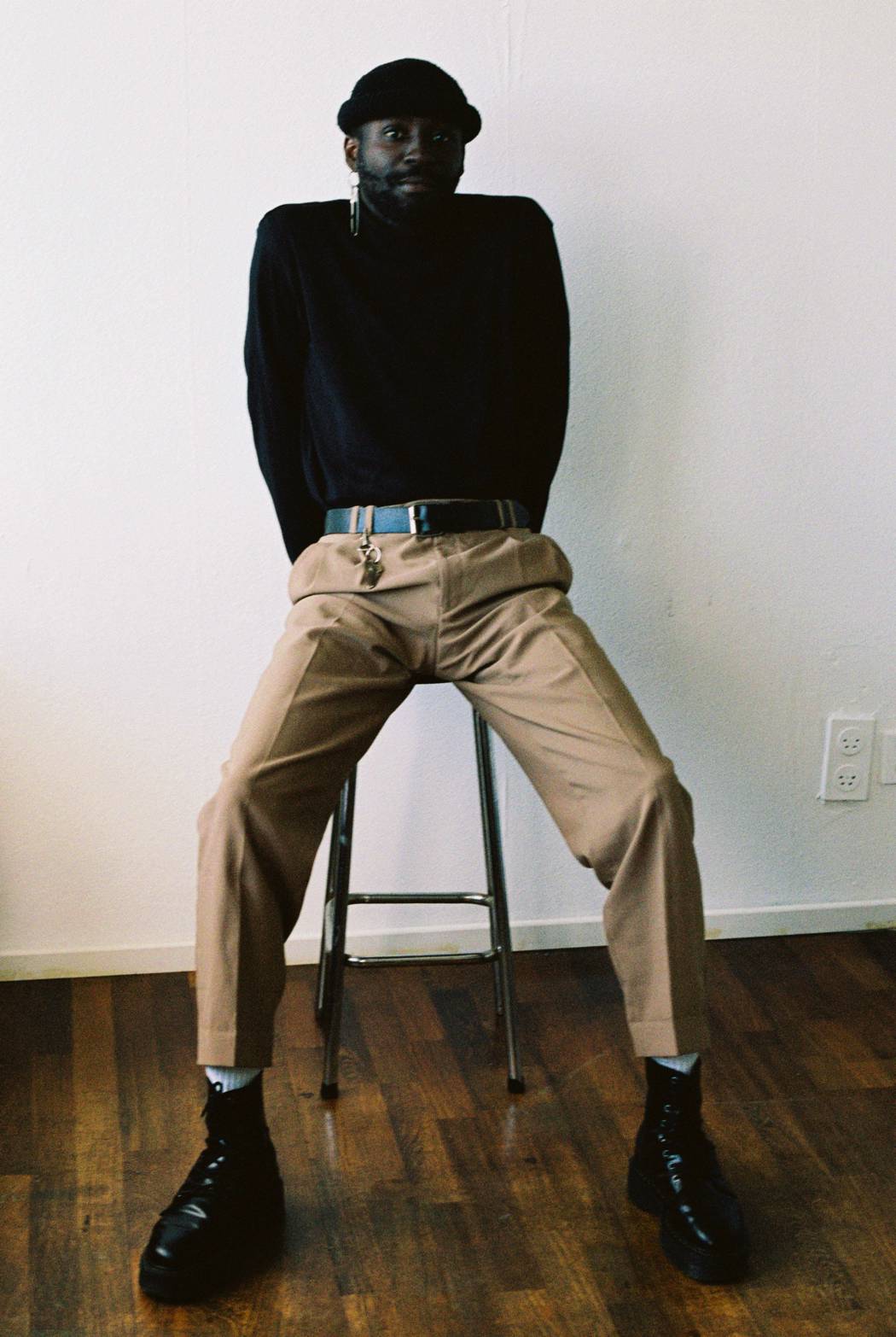 I’m Kobby. A few years ago I moved from Ghana –my country of birth– to Germany. In Hamburg, I enrolled in a Gender & Diversity Bachelor. This was also the time I first came into contact with electronic music, something I immediately felt connected to. After commuting between Hamburg and Amsterdam for some time I made the decision to move here for the time being. Right now I’m working in cocktail bar Parakeet but I’m planning to move to Berlin in the near future.

Where do you like to go during the night?
Night time, for me, is strictly clubs – no bars. This is because music is a major part of nightlife to me. I like to dance and really be into music. Here I mostly go to De School and whenever I’m in Berlin I always aim to visit Berghain at least once. A non-judgemental, free atmosphere is also important; do whatever you want, as long as you’re not hurting others. When I go to parties and everything is just right, the ambiance, the music, it’s as though we all understand one another.

How did you come into contact with your current nightlife scene?
I remember exactly when I first got introduced to the world of electronic music: January 1st, 2017. My friends and girlfriend-at-the-time took me along as we went to celebrate the new year. It was a party in Hamburg – DJ Stingray was playing. Immediately there was an organic connection between the music and myself; I could dance to it in any form that I want- ed. Be whoever I wanted to be. Express myself in totality, also without being afraid of my feminine side. 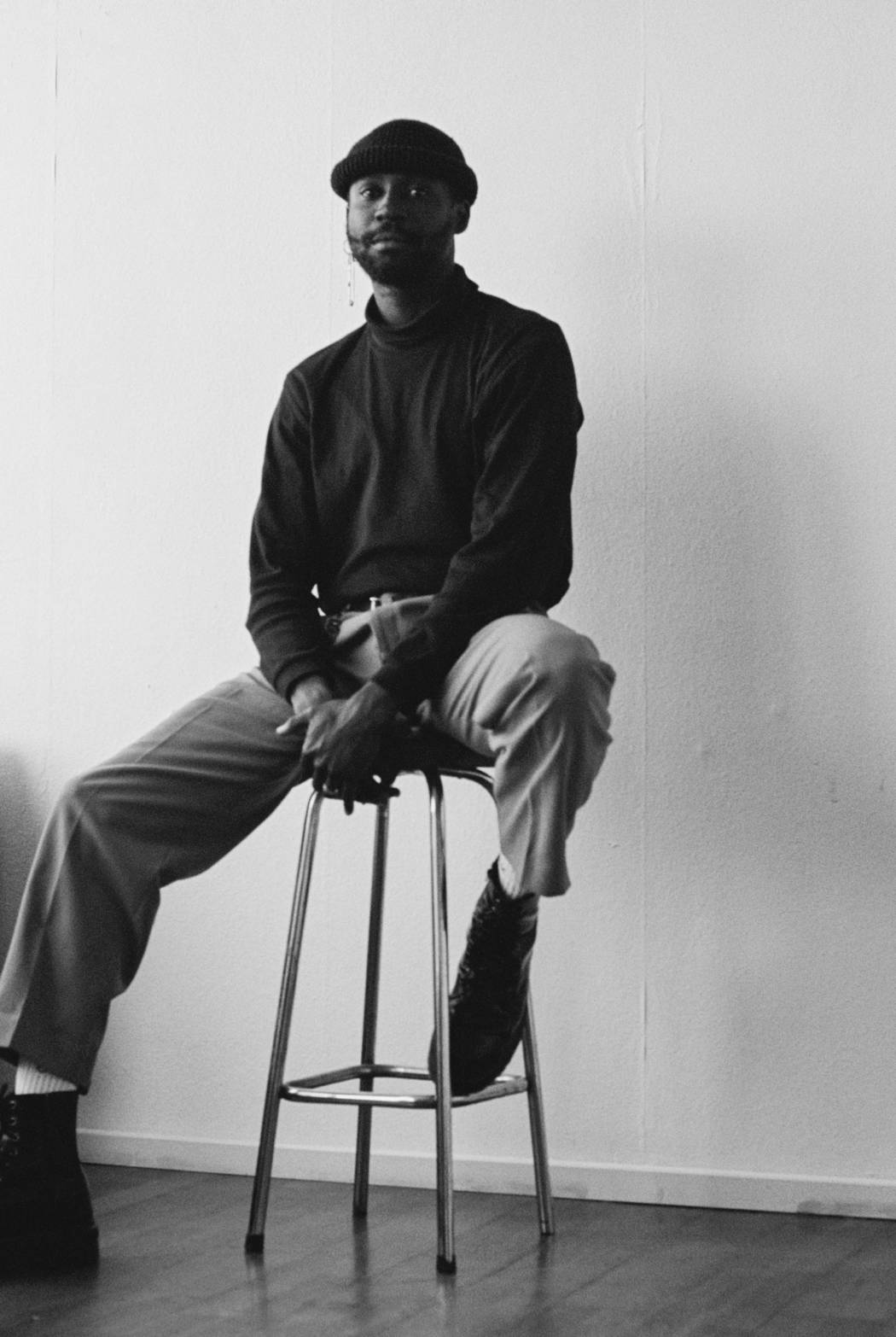 What does freedom mean to you? And how does the nightlife contribute to this?
Freedom, first of all, is me moving to Germany. Ghana can be quite a judgemental country. There’s a very orthodox mentality in general. From all sides, people are always trying to push you into that particular mold. It’s a very unforgiving culture to the people who deviate from the predetermined norm. Friends and family were always trying to change my mind; attempting to decide for me what I want to do and whatever it is that makes me happy.
Dancing is a huge form of therapy. When I’m dancing I totally forget about whatever I’m currently going through. I’m just dancing, and when I’m dancing I’m super happy. I find the one place I can totally be myself. Dancing frees you from previous conceptions of who you thought you were, or whoever you thought you had to be.

How do you see sexuality and gender?  And how does this affect you in your personal life?
I think that right now we are in a time where we’re trying to break out of old barriers with regards to gender and sexuality. No longer holding on to concepts of what you should or shouldn’t be. Gender norms are very different over here as opposed to Ghana. Less binary. This relates to male gender roles, for example, because men in Ghana have to be tough and fulfill the traditional role of being the “provider” for the family. This can cause a lot more pressure since you’re continually groomed not to have any emotion, to constantly be the “macho” male stereotype. It’s not only men of course who have to deal with restricting gender norms. Women who want to participate in the job market are often judged for it. Regarding sexuality, there is also no space in Ghana for gay people as expressions of sexuality that are non-hetero are seen as a disgrace. Gays, for instance, are shunned. Or you can get beaten up.

Apart from that sexuality in and of itself is also very conservative. I’ve always been really opposed to the cultural norms that are upheld in my country of birth in this regard. It didn’t match with how I naturally make sense of the world around me. Right now I’m in an open relationship – I simply feel like you can’t be attracted to only one person your whole life. To me, love and sex are also very different feelings. But monogamy is the standard so that’s the way we (often without conscious contemplation of possible alternatives) chose to organize our sexual/romantic relationships.

But what I like about an open relationship, at least as I experience it, is that it requires a lot of communication. Because you have to communicate everything you’re almost forced to really think about your decisions on a more conscious level. It’s an opportunity for both sides to truly think about what they want and what makes them happy, and to not let arbitrary norms dictate your life. You have to know what the other person is thinking. Make your own rules. 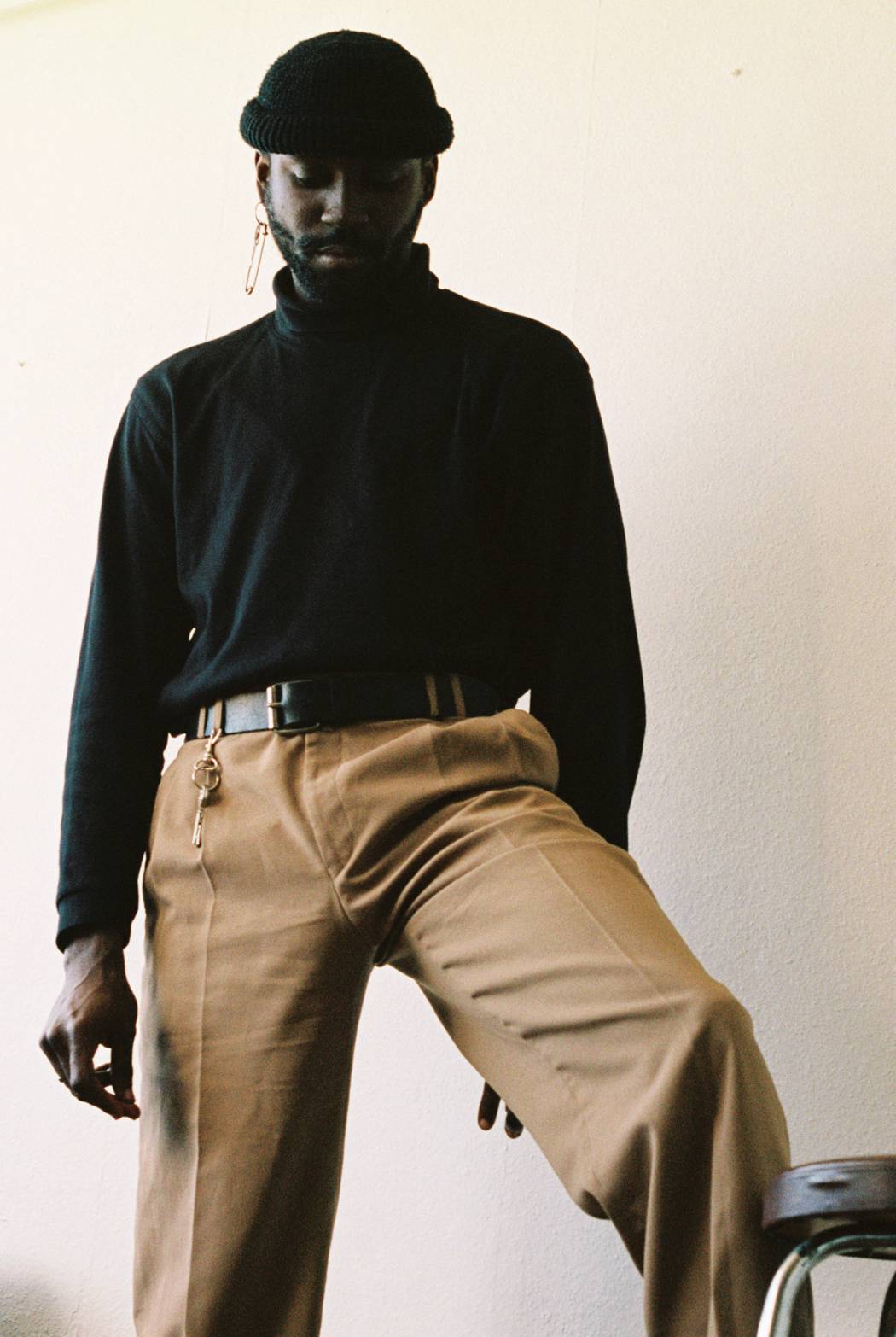 What is your view on the connection between sexuality and nightlife?
How gender and sexuality is linked to the nightlife scene differs from subculture to subculture. I personally experienced the R&B / HipHop scene as more restrictive. A lot revolves around social status – you have to keep up a certain standard. There tends to be a social norm that facilitates slut-shaming or homophobia. The electronic music scene is more flexible in this regard although this also differs significantly from club to club. You can still decide not to care and have fun at those other parties, but there’s always an atmosphere of “being better and more macho”. But perhaps Techno might also be like this for outsiders. I’m aware that I’m also moving within my own social bubble; I surround myself with people I feel comfortable with, and those are mainly queer people. 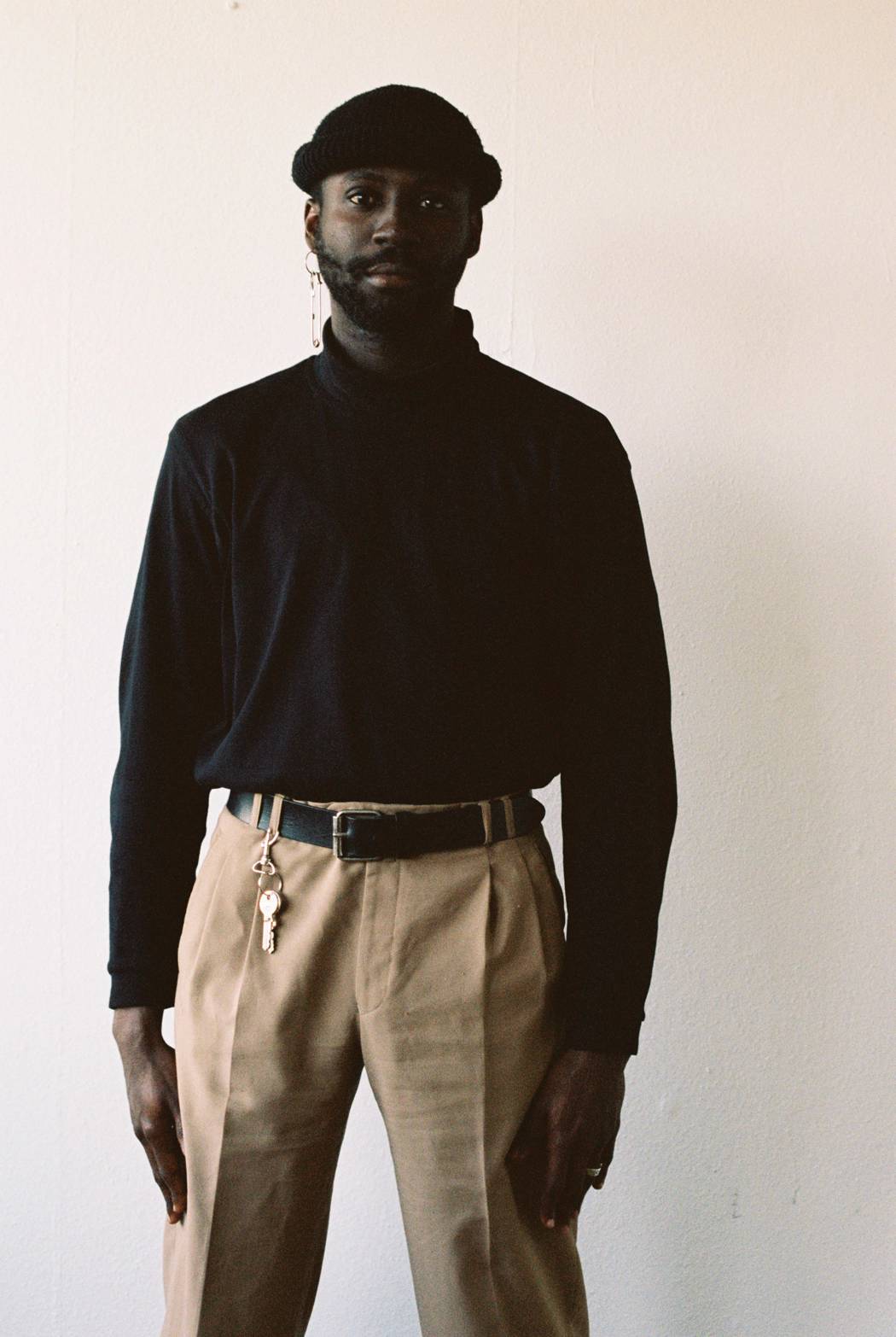 Apart from the positive aspects, what are the negative sides to the club scene?
I personally don’t see a lot of problems within the nightlife scene. There’s always a small percentage of people who’re not being careful with whatever they are taking… People passing out. Maybe they think they have too much freedom? That can be self-destructive – they really want to go all the way. People who are attracted to clubs enjoy nightlife as such but it can also be a way to escape problems. Listening to Techno makes me really happy, but for some people, nightlife becomes the only thing that makes them happy.

What has the nightlife taught you to embrace?
Through clubbing, I became more confident in myself. People appreciate the energy you bring to the dancefloor. When you sense them reacting positively to your true self it’s an incentive to go further along that path. In short; the nightlife taught me to just be myself. 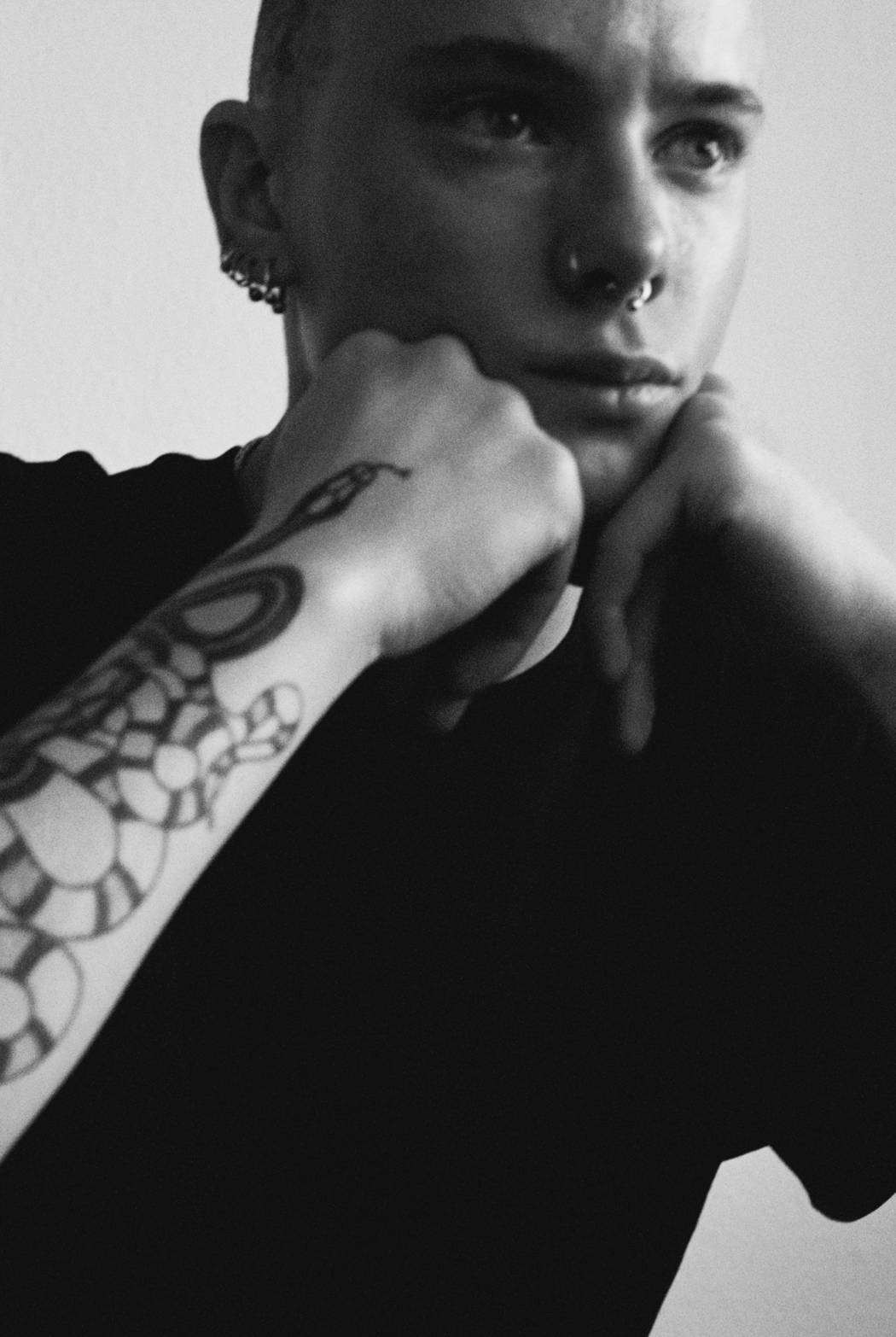 I’m Konrad. 22 years old. I live in Haarlem, where I was also raised. I work full-time as a hairstylist, specializing mostly in coloring. To improve my technique I’m spending a big portion of my spare time training in the salon.

Where do you like to go during the night?
When I go out I’m mostly attending techno clubs and parties. Usually, I feel more at ease at the more intimate parties and smaller-scale events. The bigger parties within the techno subculture tend to draw a more “macho” audience which isn’t a vibe I’m really into. Apart from that I also prefer small-scale parties more be-cause I tend to encounter a lot of familiar people there. Another thing is my slight unease with immensity in and of itself: I like to be able to have a good overview of everything that’s going on.

How did you come into contact with your current nightlife scene?
I came in contact with this scene through the music: at one of the first festivals, I ever attended there was a Techno stage… I immediately fell in love with the sound! This resulted in me visiting a lot of the more “mainstream” festivals at first until I joined a friend of mine to a queer party. The vibe was simply so much more chill than at the parties I previously attended! I’ve always felt accepted at the other events but this was really something else. The interaction of the public amongst each other is so much better. And because it’s a relatively small scene you get to know one another pretty quickly – everyone really parties together. 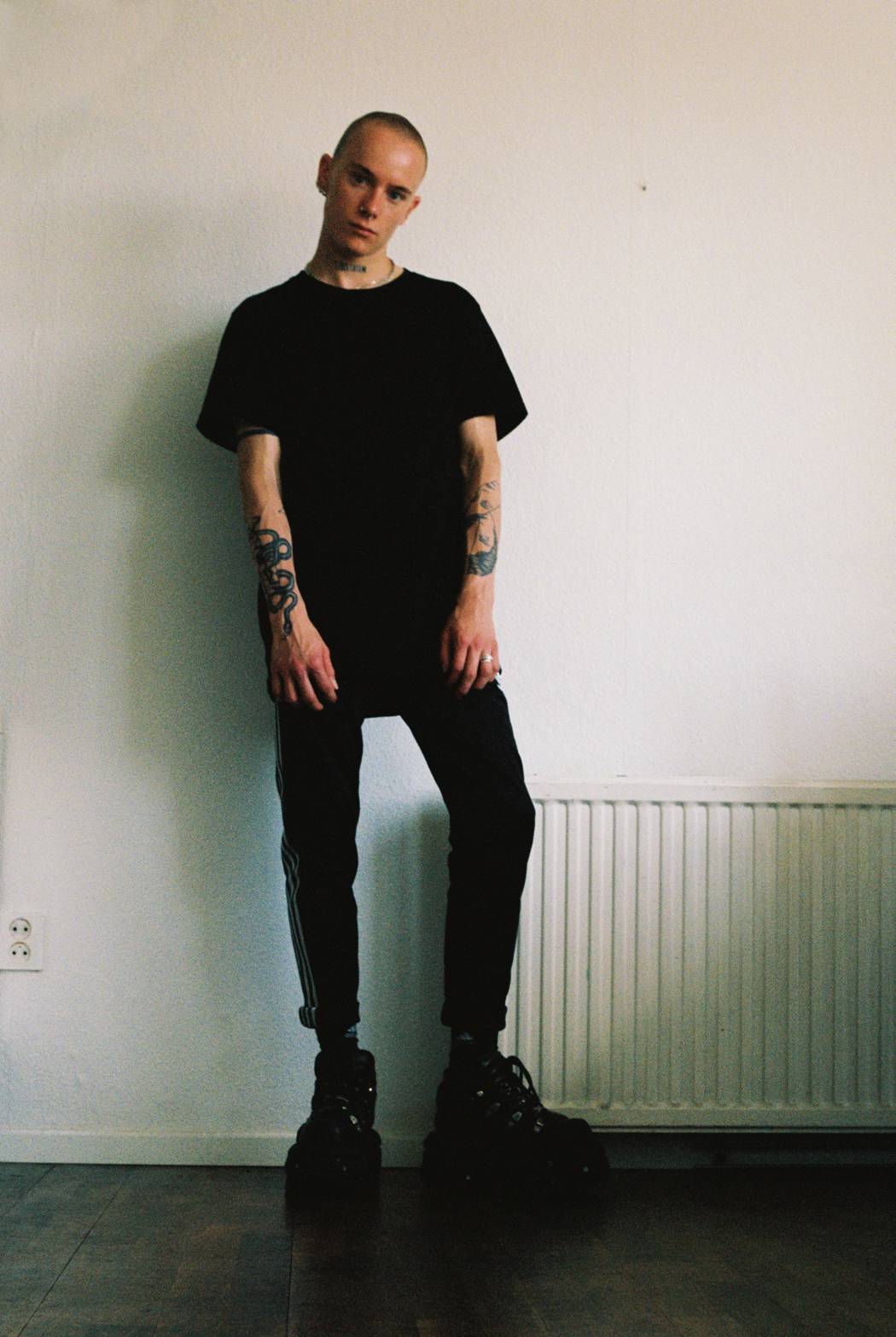 What does freedom mean to you?  And how does the nightlife contribute to this?
Freedom to me means being able to do whatever I feel like, without others taking offense. At parties in general there’s a much more free atmosphere which means certain things are accepted more rapidly. For me personally, it’s also important that I can fully make up my own plans as the night proceeds. I want to do what I truly want to do and I need friends who give me the space for that.

How does the sense of freedom you feel in the nightlife scene differ from the experiences you’ve had growing up?
In Haarlem, where I grew up, there is a strong cultural preference for normalcy. Or as the famous typically Dutch saying; “Just act normal, that’s already crazy enough”. As such, everything that deviates from the cultural norm is quickly labeled as “weird”. And this doesn’t always mean weird in an overtly negative way, but a lot of people do definitely take notice when they see someone who doesn’t entirely fit in their concept of “normal”.
At the same time, the club scene is certainly not without its norms either – there can be a very specific aesthetic. You quickly notice you’ve be- gun to develop a similar taste to the people you surround yourself with. In this sense “belonging” always has a small role to play… We might be an alternative in comparison to overall society, in the scene an overarching style certainly remains and everyone explores their own personality within that sphere. 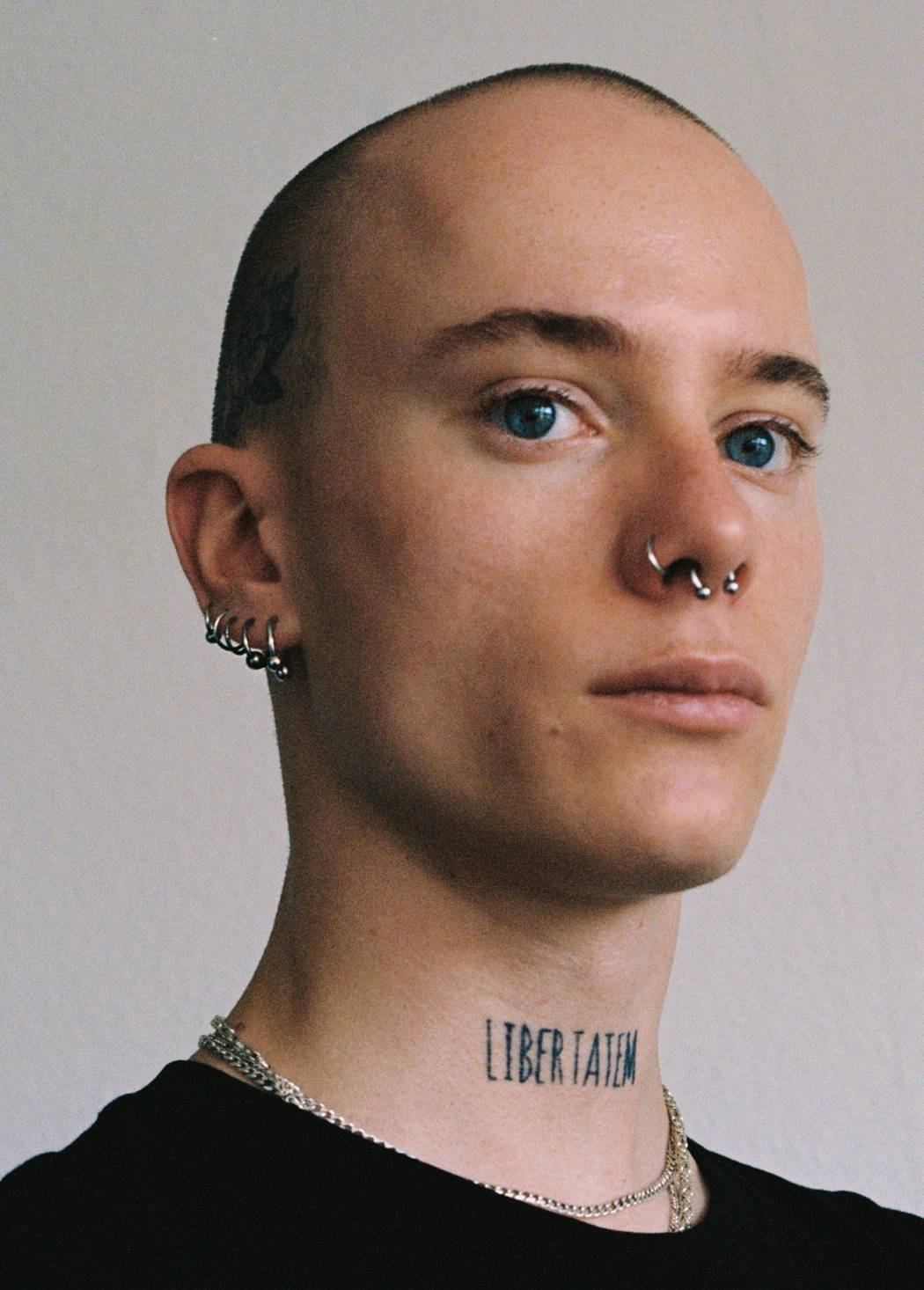 Apart from the positive aspects, what are the negative sides to the club scene?
Within the nightlife scene, it’s important to keep your own personal boundaries in mind. It can be quite easy to let yourself go a little too much. Also, it can feel a bit lonely when you’re going home alone after spending the entire weekend with your friends. What generally works for me is simply making an agreement with myself and sticking to that. For instance, I don’t have to go to the club every weekend anymore. Although, I do have to say that I tend to miss a certain outlet to get rid of excess energy when I skip too many!

What has the nightlife taught you to embrace?
The thing that I’ve come to realize most from my time within the nightlife scene is how important it is to give everybody the chance to be whoever they truly want to be. Apart from that, it’s also important to accept and respect those people whose opinion differs from your own. Never judge too quickly – people might yet surprise you. 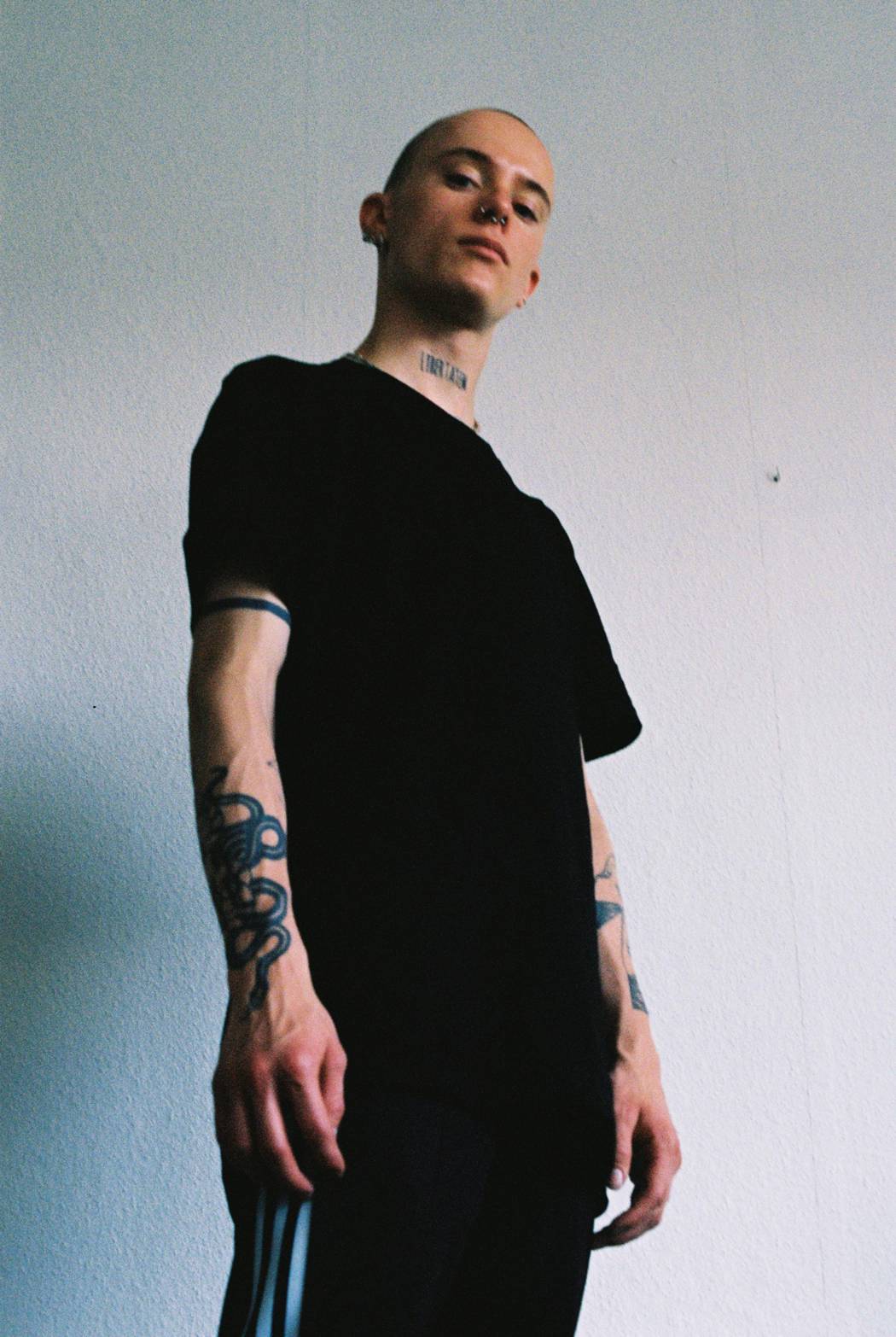