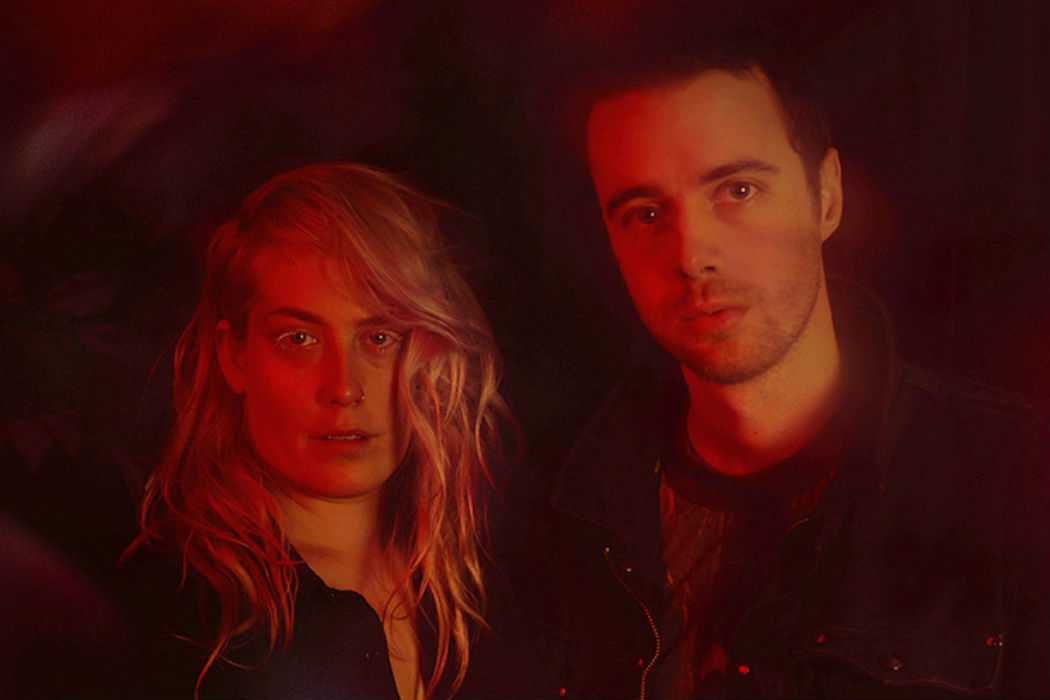 Mysterious electronic duo Boy Harsher has developed a cult following in Berlin. Vocalist Jae Matthews and producer Augustus Muller hail from small towns in the North East and have no explicit connection to the city. Yet almost immediately after announcing their (first) European tour, the Berlin show at Urban Spree sold out. Once recognizing the depth of their fan-base, they amended their tour schedule in attempts to supply the Berlin demand. They announced another show on December 10th, which again, almost immediately sold out. Listen to just one minute of razor-sharp synth track “Modulations”, which hammers at an unforgiving 144 beats per minute— and the root of their Berlin fanbase couldn’t be more obvious. Their shadowy cold wave harmonizes beautifully with the dark, hedonistic sounds that move bodies on Berghain dancefloor week after week. The hypnotic quality of tracks like “Pain” and “Motion” cast kinetic spells with their brutally beautiful repetition, the kinds of spells so heavily sought after in Berlin nightlife. There’s a ruthlessness to Matthew’s smokey, monotone vocals that virtually demands dancing. Muller’s poetic production captures 80s nostalgia in a distinctly modern way, elegantly fusing the old with the new. We caught up with Boy Harsher upon their Berlin return to learn more about the duo making such a name for itself in the city.

KALTBLUT: Tell me a little bit about where you’re from and how you two met.
Jae: I am originally from upstate New York. I moved to Georgia to attend grad school. I met Gus around town. He drove around in his ex-girlfriend’s beat-up Volvo station wagon. I thought he was a total goofball.

Augustus: I’m from a small town in Massachusetts. I always wanted to live in south and moved down after highschool. I did production design on Jae’s thesis film. She’s such a boss on set.

KALTBLUT: What was the draw to the South? It has a reputation for being slow and backward…was that a source of inspiration?
Jae: I did thoroughly enjoy the superstitious and anecdotal culture. When I embraced that lifestyle, it was very motivating.I reference that feeling a lot in our music. And, I am from Upstate NY, which in my experience, can be just as conservative and slow as the ‘red’/ southern parts of America.

Augustus: The south is definitely a creative haven. I feel like a lot of southern art is more sincere. At the time, I was really into the early Terrence Malick films like Badlands and Days of Heaven and David Gordon Green’s first films like George Washington and Undertow. I was drawn to the landscape and openness of it. I’m originally from the northeast, so the south seemed like entire new world to explore.

KALTBLUT: How do you think your backgrounds in filmmaking contribute to your musical production?
Jae: The hope is to create something that evokes a certain feeling or atmosphere, which I think is very much a filmmaker’s goal as well.

KALTBLUT: What are some of your favorite films or directors? Would you say these are as influential as musicians in regard to your sound?
Jae: My favorite films always seem to morph with where I am in life, but lately I’ve been stuck on the Safdie brothers’ Good Time and Claire Denis’ Beau Travail. I always get a kick out of Lynch and I think our music probably attempts to mimic the thrill and fear found in a lot of Lynch films.

Augustus: Filmmakers and musicians are the same level of influence to the sound, yes. 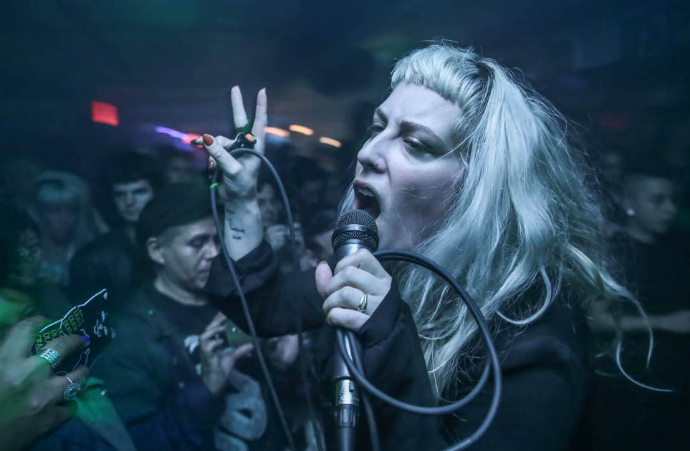 KALTBLUT: What are both of your historical trajectories with music? What kind of music were you making before you two teamed up?
Augustus: My first project was equal parts video and music. I experimented with found and original footage and then would write soundtracks for the video. It was combination of ambient drone and minimal pop. The kick drum slowly got louder and it then it was a techno project. I met Jae around that time.

Jae: I wouldn’t consider myself a musician before we teamed up, or even now honestly. I have always written and wanted to write screenplays. I still do on occasion.

KALTBLUT: How would you describe the division of labor in the duo? Who writes the lyrics, for example– or is everything a collaborative effort?
Augustus: I write and program most of instrumentals. I spend a lot of time with pre-production writing skeletons of songs and Jae is (almost) entirely responsible for the lyrics. However, we’re the strongest when we’re working on the songs together.

Jae: Sometimes I ask Gus to emulate sounds that really hit me … like I used to lay in bed and I could hear the highway, because at night the sound travels, so I’d ask for that “motorcycle muffler off the highway” synth sound.But that doesn’t really count, so I would say that he is the brains behind the grooves.

KALTBLUT: So you both were involved in the film world, yet your video for Motion was directed by MJ Bernier. Did you two have a major role in production?
Jae: MJ approached us with an interest in creating a video andI had this idea where a camera follows a woman around Chinatown. MJ took this image and expanded it, casting our bud Kristina and capturing a beautiful, rainy night in Manhattan.

KALTBLUT: The “Country Girl” music video is absolutely mesmerizing. The juxtaposition of the title “Country Girl” with the aesthetic/sound/lyrics is majorly intriguing. Can you tell me a bit more about the song itself and the backstory of the music video. Who directed it?
Jae: I directed the Country Girl music video. The content is from a halted short film that I was in the midst of producing. The star of the video is this incredible actress, choreographer, performance artist and musician – Tara Jo Tashna. She really was the impetus to finish the thing, even as a different form (music video vs short). I feel very honored to have had the opportunity to work with Tara + am hoping to create another film with her this year.

KALTBLUT: Would you ever pursue producing your own visuals or music videos moving forward?
Jae: Yeah totally.

KALTBLUT: How would you describe your musical influences? Does techno play a role?
Jae: It wasn’t until I was older that I was able to get into techno + experimental dance music. When I was growing up I listened to a hodge-podge of my mom’s divorce music (The Eurythmics + Suzanne Vega) and Chris Cornell’s radio hits. Hearing NIN for the first time was definitely a global shift.

Augustus: I was really into punk in high school. At some point 4 on floor distorted kick drums just seemed way more raw. Bands like DAF and Suicide helped the transition. I was playing hardware techno when Jae and I started making music. We needed to find a way to make the music more melodic, so we discovered coldwave. 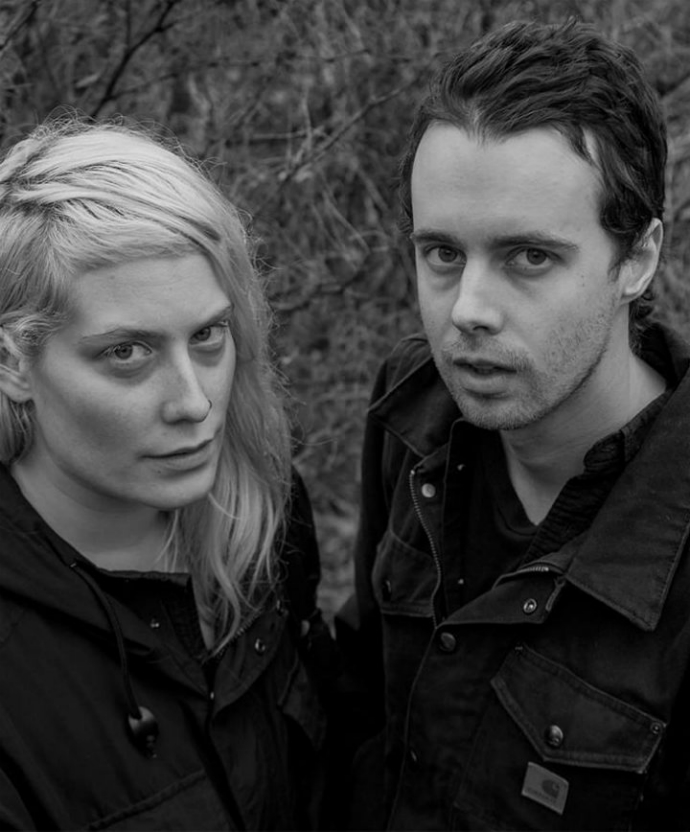 KALTBLUT: How would you describe your own sound?
Jae: Our sounds, to me, are very landscape oriented. I think this is because I hear something, like that loud motorcycle on the highway a distance away, and ask Gus to recreate.

Augustus: We want to be the music to a visual experience.

KALTBLUT: You just finished a European tour. Did you feel your music/shows were received differently in Europe than in the US? How did the experience of playing and performing feel different?
Jae: Only so far that they were way more attending than I expected. That was super flattering and humbling… like the crowd in Moscow losing their minds and singing along to the songs. It was totally bonkers.

In conversation with .. 2! New Print Issue!

KALTBLUT: What are your impressions of Berlin. Had you both travelled here before the European tour? Do you have any connection to the city?
Jae: Never been! My family is abstractly German and my grandmother used to take the grandchildren on a pilgrimage to the home country upon their 18th birthday. Sadly she passed before myself or my twin could experience this country through her guidance.

Augustus: I had no real expectations. I know it’s a city of of extreme and tragic history and the music to seems to reflect that. I look forward to exploring Berlin more.

KALTBLUT: Were you surprised to sell out your show(s) here?
Jae: Yes, of course. Extremely humbling to say the least.
Augustus: Big time. I thought the shows would be good, but not this good.

KALTBLUT: Why do you think your sound resonates so well with Berliners?
Augustus: If we only knew. That might be the gate to immortality.

KALTBLUT: Dark music is the beloved norm here, but then again Berlin is a city with a complicated and dark history. It’s amazing to me that you two can make music from a faraway place that fits, so precisely, into the aesthetic and atmosphere of the underground scene here. Why do you gravitate towards this sound- and cold wave?
Augustus: Personally I’m a pretty cynical person who is always fighting to find some optimism. I’ve always been drawn to art that illuminates tragedy, but with some silver lining. Which I suppose is why I like a lot of early music from Berlin. Berlin has such a tragic history and the music in the 80’s seems to be a direct response to that moment. The sound is desperate and dark, but there’s also real beauty and strength to it as well.

Jae: Can’t wait to hear “Pain” while waiting in line to Berghain!

KALTBLUT: Would you say the kind of music you make feels displaced in the US? Where does the cold front for the cold wave come from?
Jae: I never thought of our music as a displaced sound, but of course the history of cold wave is rooted more in Europe than the states. Our music is influenced by cold wave… I think we just found a way to merge our instincts and noises together in a way that makes sense to us.

Augustus: We try not to promote our music on the merits of genre. The songs come from a genuine place and are important to us. I think there’s room for that kind of music everywhere.

You can listen to Boy Harsher’s full discography here.
boyharsher.bandcamp.com