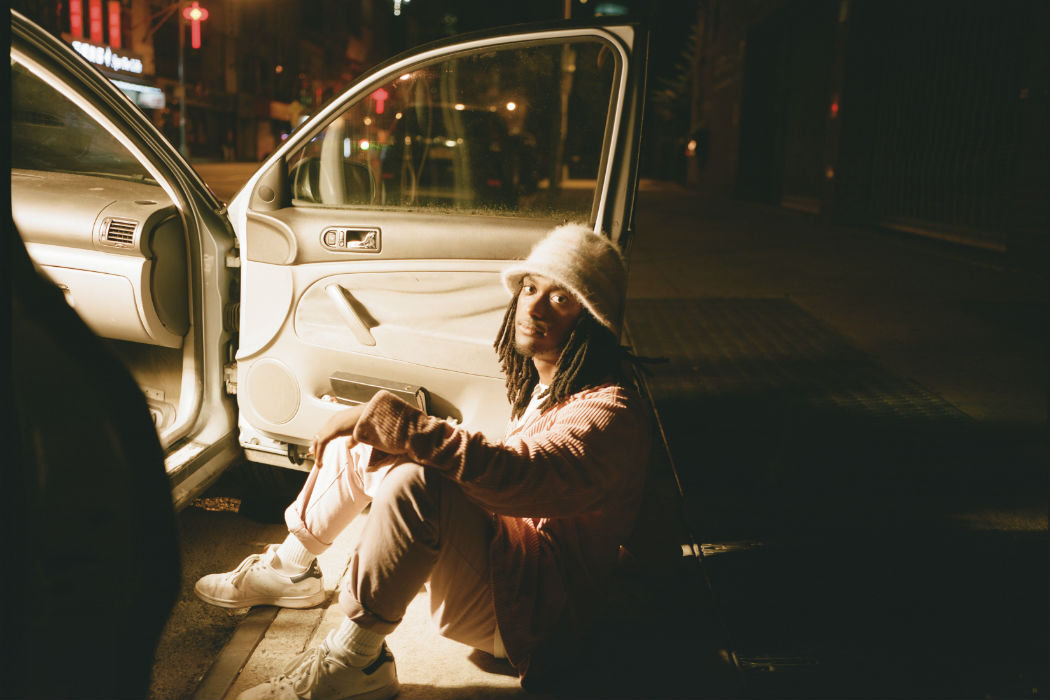 Hailing from Atlanta, talented and accomplished 19-year-old singer-songwriter Demo Taped is due to release his next EP Momentary tomorrow. Already gathering critical hype and momentum, Demo Taped has been featured in the likes of Noisey, Stereogum, FADER and many more. Bold in visual style and highly photogenic, Demo Taped has also developed an eye-catching aesthetic in his wardrobe choice. Having premiered the first track from Momentary on NPR, ‘Insecure’ holds a special resonance and significance to the completion of the EP. Recorded in the church Demo Taped grew up around, the church itself was founded by former slaves during the Civil Rights movement with his grandfather the pastor at one point. With this strong emotional and familial connection, his father and musicians of the church were also involved making it an endearing and poignant choice for the EP. We delve a little deeper with Demo Taped discussing the upcoming release, his experience of dealing with mental health (an issue close to his heart) and the process behind his fashionably unique style takes.

KALTBLUT: Hello, Demo Taped! It’s a pleasure to meet you. Would you like say a little bit about how you got into music?
Demo Taped: I’ve been into music for as long as I can remember. My parents were always exposing me to music and I’d see my dad playing bass every Sunday at church. My parents got me into piano lessons when I was about four and my piano teacher found out I could sing. From there, I was playing and singing at piano recitals and soon I started writing songs. My parents also got me a computer when I was young and I experimented with things like iMovie and Garageband.

KALTBLUT: An openness in approaching mental health amongst the black community is an issue that is close to you. Is this something you look to consciously address in your music?
Demo Taped: I don’t look to consciously address mental illness within my music. My goal is just to write from ultimate truth. Mental illness (and all the stuff that comes with it) are just things that are a part of my life. I’m just trying to tell my story.

KALTBLUT: What does self-care mean to you when struggling with anxiety and depression?
Demo Taped: To me, self-care when struggling with mental illness means not isolating. It’s important to reach out to those you’re close to. Also, remembering to eat and take care of basic care stuff. It also means taking time to relax the mind. I practice transcendental meditation and it has really helped me.

KALTBLUT: Civil Rights and racism as always, a pressing topic especially given the current political climate and administration. What would you hope to see in the future of race relations in America?
Demo Taped: I just hope to see a world with people that can respect and honor differences of others. We also need to talk about these issues more. The more you bring issues like racism and bigotry and have that conversation, the more attention gets brought to it obviously. It’s not just about talking to people that align with everything you believe. We need to start being able to have conversations with the people we consider “the other side”.

KALTBLUT: Tell us a little about your first track from your EP “Insecure” – how was it conceived and the recording process.
Demo Taped: I was very fortunate to receive a sample from Frank Dukes. I had a few days in the studio in New York and I reproduced the sample with Yebba Smith and Pete Cafarella. I came up with the initial concept of the song with Yebba which is being so wrapped up in your insecurities that you become blind to truths. I called Ben Abraham and we wrote parts of the song over the phone, trading voice memos back and forth. After the song was written, I came back to Atlanta and tracked my dad playing bass and got in contact with the other musicians at my church. I got several passes of live drums from James Barrett Jr. and I arranged those and then I recorded the organ in my grandfather’s church with Paul Anderson. That was the last thing to go into the record and it was a special moment recording there.

KALTBLUT: There are strong elements of Jai Paul (yes, we are fans too!) with a playfulness in your sound – what are your influences or inspirations that inform your music in some way?
Demo Taped: With this EP, I wasn’t really influenced by anyone sound wise. I just created what I felt sounded good. I was heavily inspired by Junie Morrison and also, creatively, by David Lynch.

KALTBLUT: We love what you’re doing visually too. Please talk us through your style aesthetics.
Demo Taped: Thank you. I enjoy old print ads and VHS videos and stuff like that. I’m an analog person. I like things that look old but futuristic. It’s a cool juxtaposition.

KALTBLUT: Finally, after the release of your EP, what else can we look forward to from you this year?
Demo Taped: A lot more music.

Momentary is out February 22nd via 300 Entertainment, pre-order it here