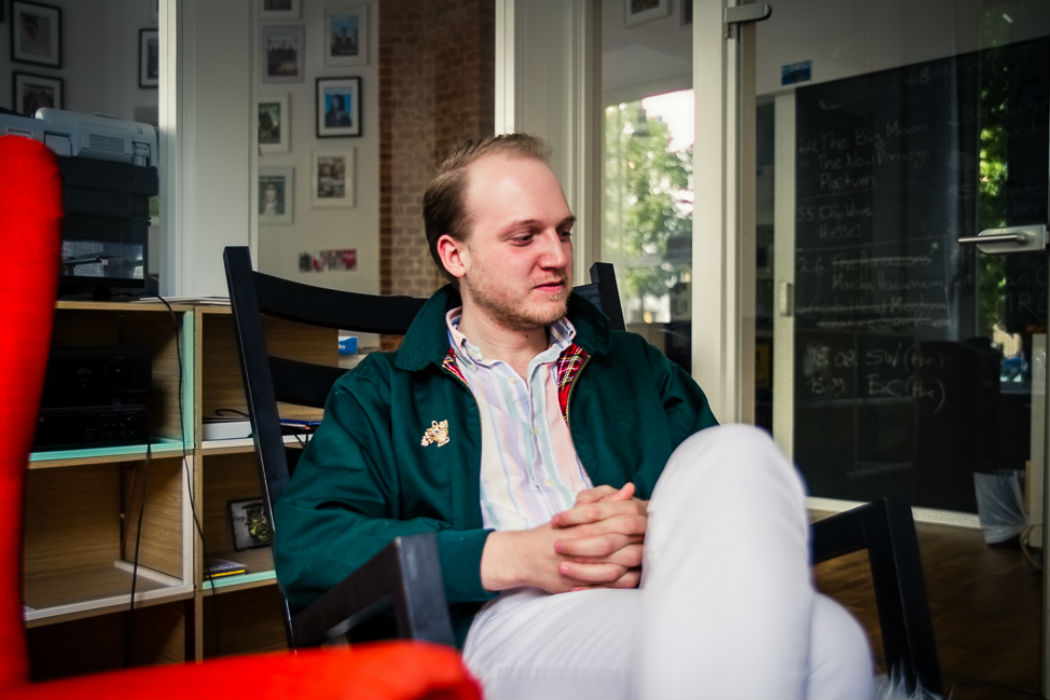 Max Richard Leßmann sees music a little differently than your typical musician; instead of having developing a melody, he finds words. Best known from the German indie-rock band Vierkanttretlager, Max has started a solo project on the side and already released three music videos. His latest, “Einen im Tee,” cultivates the idea of a “word-musician” further by taking a German idiom, literally translated to “having one in the tea,” but used to describe a state of utter intoxication, and creating the perfect anthem to any night out.

KALTBLUT: How is it transitioning from a band to a solo project?

Max Richard Leßmann: When you’re in a band you talk about everything, which is quite awful at times because sometimes you have an idea and you think that that’s great, but then two other people come in and destroy everything you dreamed about. It can be nice, too, because a lot of things can come from that creative process, so at the same time it’s both better and worse to be a solo artist. But I like it; I have to adjust a little bit into that to be alone with my thoughts and to decide for myself if I like something or not so much arguing with other people about it. I am also still in Vierkanttretlager, so it’s just a something different sometimes.

KALTBLUT: Was it ever a question if you were going to sing in German or in English?

Max: Not really. I think I might have written some lyrics in English, but that was just because I spent some time in Britain when I was a kid and it came kind of naturally to me as well. But German is the language I speak in and dream in and love in, so it wouldn’t make any sense for me to write in any other language because it wouldn’t be so direct. I could try to use other languages, but it would never be the same thing as as a writing in German. I think everyone’s first language is maybe the one where you can be the most direct and the clearest and the funniest maybe.

KALTBLUT: Where do you pull inspiration from for your solo work?

Max: Actually… everything. That sounds a little un-concrete but yeah. I like to talk to people, I like to get to know ideas of other people, I like to listen to music and to listen to everything around me with words in it. I’m not really a musician in the typical kind of way – I’m a word-musician. I’m the one that finds the words that sound like they should have music with them – that’s what I do – so then the people around me create the music to go with them. Sometimes it’s when I talk to people, sometimes I just read a sign on the street, or sometimes I overhear a conversation. I’ll get inspired by any words I hear or read.

KALTBLUT: What are you most looking forward to after the release of your album in July?

Max: To be really honest, I’m ready to start writing new music again. I like to put it out there and just start again. I like to play live, most people say it’s the best thing about making music, but for me the best thing about making music is the actual process of creating music. To go to a place where it’s silent and to make noise, to put things together that weren’t there before, to put words together, to put sounds together, and after that there’s a song, when there was nothing there before. That’s what I love about being an artist.

KALTBLUT: Is there a particular line that you’re most proud of you could share?

Max: There’s a lot, actually… oh man, it’s like trying to pick which of your kids you love the most.

KALTBLUT: What made you decide to come to Berlin?

Max: Obviously, love. There’s no other reason for moving anywhere.

KALTBLUT: And it worked out?

Max: No, that didn’t work out. It’s okay, though, because I wouldn’t have moved here otherwise and I’m really glad I did because I really enjoy it here and I didn’t think I would so it’s okay, it’s good.

KALTBLUT: Do you have kind of an “everything works out for a reason” philosophy?

Max: I try to make it my philosophy, it’s challenging at times, of course, but when you think back to things that happened to you that really sucked at the time…. in my life, at least, there isn’t such a thing that didn’t make sense afterwards. Even this breakup that happened after I moved to Berlin has really been one of the best things, maybe, in my life. Even though I was sad about it and I still love the woman and she stills loves me and everything just didn’t work out for whatever reasons and that’s still horrible for me to accept that but still I learned so much out of it and met some fantastic people through it who I don’t think I would’ve met if that did happen. At the exact moment we broke up, it was the worst thing ever, but looking back it was almost a year ago and I’m thankful for what I have learned from it. So, I try to make it my philosophy because it’s better look at things that way. It’s not easier, but it helps you to grow.