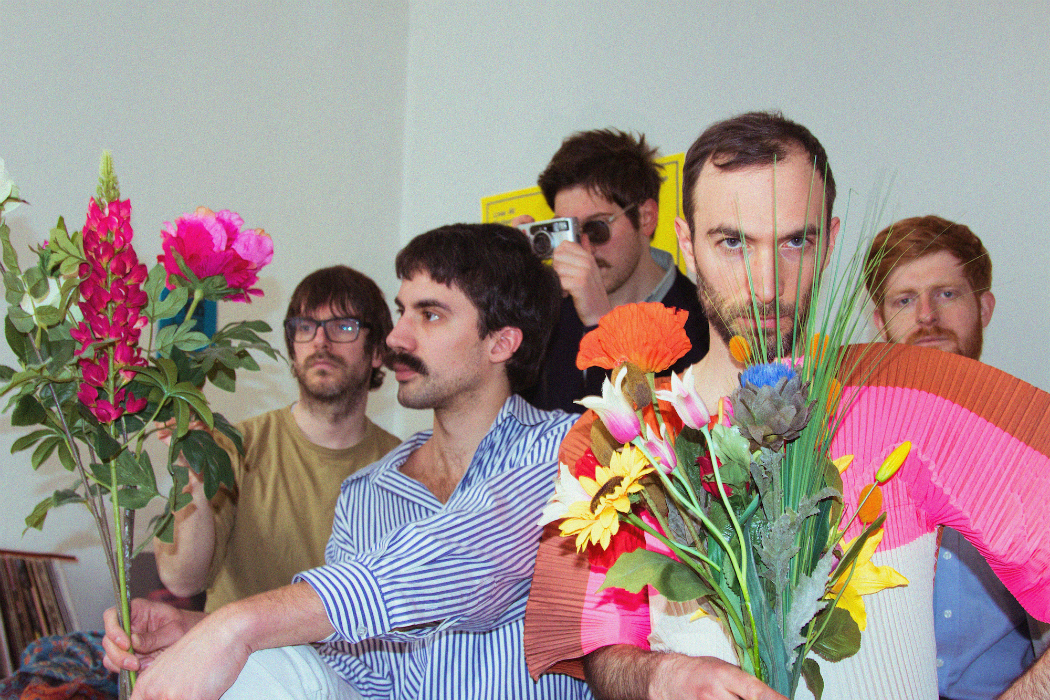 Not to be confined or defined in particular categories, NEWMEN return with their second LP Soft Ware. Having come together in their hometown of Frankfurt, NEWMEN transpired from a collective need to move away from the conventional band sounds to create a sonic sphere that excites and emotes. In a world where originality, and indeed, amalgamations in art prove to be difficult in producing anything remotely pulse-rate increasing, NEWMEN use this oversaturated world as an intriguing focal point to their advantage, unashamedly embracing a plethora of styles from pop, electro, Krautrock and everything in between. Combining analogue and digital in a playfully effortless manner, simultaneously juxtaposing multiple genres, NEWMEN have found the perfect antidote to the questionable weather and seasonal change with their latest release. We delve into the construction NEWMEN’s sound and vision following Soft Ware, what else is to come and the importance of avoiding nostalgia in art.

KALTBLUT: To our unfamiliar readers, tell us a little bit about how NEWMEN formed.
NEWMEN: We founded in 2012. We all played in different music projects in our hometown Frankfurt. They were all very classic band projects. At some point, we had the feeling that we needed something new for us, so we bundled our energies and launched NEWMEN. The goal was to give voice to our idea of a more electronic influenced music. So, we bought some old synthesizer and just started to write and play.

KALTBLUT: What would you say is an integral characteristic that each individual brings in NEWMEN?
NEWMEN: We all come from a musical environment where we still play our instruments. We still do that. For us, the trick was that we brought machines such as synthesizers and sequencers into the band and in that way, we put our own author’s subjectivity in contrast to artificial sound and melody creation. In this sense, we bring all our slightly different approaches to the band. Martin comes more from the direction of electronic music and the way this kind of music is produced in the box, while other members of the band come more out of the corner of playing live and jamming.

KALTBLUT: In a world of copy and paste culture and constant reimagining of previous eras, how would you say you maintain an originality in what you create?
NEWMEN: That’s a nice question and something we’ve been very busy with. We think that it is almost impossible to create something new anyway. That’s why we find the idea of recombining things much more exciting. It only remains important to speak your own artistic language and to maintain your own dialect. There is nothing wrong with being influenced by earlier eras, or even using them as readymades. It is only dangerous if you work exclusively nostalgic. When one perceives and reflects one’s environment with open eyes, the current influences and topics of our times should find their way into one’s work automatically.

KALTBLUT: Your styles and influences are varied, which on paper may read as a messy cacophony of sounds. However, NEWMEN blends this into something fun and exciting. What is important in your process of achieving this?
NEWMEN: It’s fun to combine our influences. Both, on the side of the music and the sounds as well as the topics we work on. In the end, it was important that we put together a kind of colour palette of sounds before we started with the recordings. In that way, we were able to paint our musical picture. Therefore, it was finally possible to combine songs on one album, which were at one time written on the bed in the morning with the guitar and another time in the rehearsal room where everything started from a sequence from our synthesizer.

KALTBLUT: Soft Ware is NEWMEN’s fourth album. How would you say your sound has evolved from previous efforts?
NEWMEN: Correct! To be precise, Soft Ware is our second full-length album. In between, we have released two more EPs and a handful of singles. The biggest difference to our early releases is probably that this time we have paid more attention to our musical language. This time, we’ve been careful not to use too many different sounds to create a homogenous overall sound that still allows us to combine a heterogeneous song selection on the album.

KALTBLUT: Tracks on Soft Ware such as Trivial Pursuit, Pool Day and Finish Fetish all are distinctively different from a familiar NEWMEN DNA. Are there any common running themes between them which may not immediately be apparent?
NEWMEN: As you mentioned, the songs combine the same sound DNA, although they are different types of songs. But there are also similarities in the topics. For example, Pool Day could well be understood as a come-down after a busy night that a song like Physique Pictorial could describe. Therefore, the songs have all similar topics that are often very personal. But it was important to us that the songs still speak a universal language. We avoid, for example, directly addressing or naming people. When we sing, “Your skin dry,” it could be the skin of a man, a woman, a cat, or anything. The listener can decide for himself how to paint the picture in his head.

KALTBLUT: The album has an effortless feel to it, each track segueing smoothly on to the next. Were there any particularly difficult or challenging tracks or moments when working on Soft Ware?
NEWMEN: We know such difficulties well from our earlier productions. However, this time we have used our above-mentioned colour palette with great care. That’s why it was amazingly easy to make a coherent work out of it. There was a lot to talk about at the beginning, but once we started recording it was a floating process with just tiny difficulties.

KLATBLUT: With the release of your latest album, what’s next for NEWMEN?
NEWMEN: We will play a little tour in May and will be back on the road in autumn. In between, there will be a few festival appearances and maybe even one or two concerts abroad. We are very happy to finally be able to play the new material live.

Soft Ware is out now