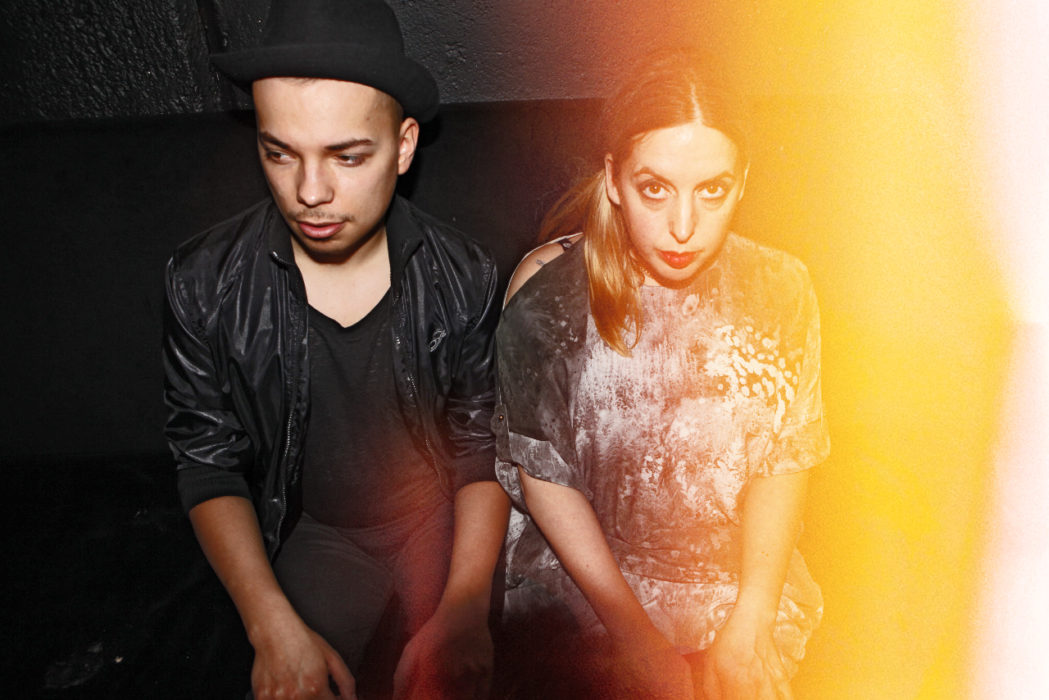 If you’ve wondered, ‘is there is more fun to be had this year?’ then the answer is a resounding: ‘YES…’ and what kind of question is that anyway?! If you’ve also wondered… ‘where’s all that pop, glam, synthy, instrumental music stuff that I like?’ It’s with The KDMS. They’ve got it. Their latest LP “The New Old Normal” has been released and it’s packed full of entrancing vocals by London based singer/songwriter Kathy Diamond, and synthetic beats mixed with live instrumental concoctions by producer Max Skiba. Not to mention one of the best techno remixes of Kate Bush’s – ‘Babooshka’ that we’ve heard.

Kathy Diamond is undeniably recognizable with her love and reference to 70s disco icons. And despite the album’s overall pop sensibility, we are met with eleven intricate tracks which touch upon multiple genres: from breezy yacht rock, Paisley Park funk, Hall & Oates’ blue-eyed soul to Kompakt-style house music. It’s T-Rex glam and disco glitter with a whole lotta side punch.

The band’s debut album “Kinky Dramas & Magic Stories” saw support from hip hop royalty Snoop Dogg (on his one and only disco DJ mix “Snoopalicius”) and several remixes by Hot Chip band members, notably, Alexis Taylor’s “Wonderwoman” cover. And it doesn’t stop there… “The New Old Normal” also bares musical accompaniment by several high-profile guests; including Kurt Maloo of Double, and album cover artwork by Filip Pagowski, who is best known for his graphic design work for Comme des Garçons, and Drake. With such strong support and so much flare, it’s hard not to admit that “The New Old Normal” is a rare achievement in today’s formulaic world of club-inspired pop music.

KALTBLUT: Your first album “Kinky Dramas and Magic Stories” made a name for you as a neo-disco superduo. What is it particularly about disco sounds that appeals to you?
Kathy: I just love the slick glamour that comes from disco. It’s unashamedly dramatic. It’s good to lose yourself on the dance floor to a classic from that era.
Maxi: It is the magic, a solid dose of real emotions and a happiness that the music feeds you with. The stories are told indirectly and there’s lot of space for your imagination left, so you can fly on its wings, surrounded by the magical sound. It feels like smh not real, it adds a special value to your life.

KALTBLUT: How would you say your new album “The New Old Normal” differs?
Kathy: We wanted to do some big storytelling. It’s always a gamble when you’re making music for the dance floor, but we really wanted to dig a bit deeper with the lyrics. I think it really works simply because Maxi’s music is so catchy and uplifting.

KALTBLUT: Why the decision to move away from disco inspired melodies and into a more multi-genre format of music making?
Maxi: It was a consequence of the songwriting development. We built the whole concept from the scratch. The first writing started in Brighton in 2012, this time we knew we’re creating an album (which wasn’t that obvious during proceedings of the previous record, at least at the very beginning) and we wanted to do it in a classic way. So this was a kind of reinvention for KDMS, that’s why we choose the name “New Old Normal”. It felt kind of natural to us to have a proper album containing real songs this time. However, don’t worry, these tunes despite being more poppy, work pretty well live! You need to check our show!

KALTBLUT: How did you meet?
Maxi: It was back in 2007 in Warsaw (almost 10 years now!). Kathy came to a show and as we had some contact before through Myspace (yes, good old Myspace times) we ended up with a first song, which was “Never Stop Believing”.

KALTBLUT: Do you think the fact that you are from diverse cultural backgrounds enhances the music that you produce together?
Maxi: Despite being from the different countries I think our musical background is pretty similar. We share the same kind of inspiration, our music taste does not differ much, either. Also regarding the songwriting I think we do complement each other. Kathy initiates one concept, a story, a new idea, which can be completed by me and the other way around. We always feel like that work being done by the other one fits the initial concepts, as it is simply being understood. Our collaboration just seems to work. And now it is even more visible, when few years have passed and we feel like we’re the Family and yes Kathy almost speaks polish.

KALTBLUT: Getting coverage by Snoop Dogg and remixed by Hot Chip must have been a great feeling. Who are some of your musical muses?
Maxi: It was a real gift from the universe that we received a support from such Icons. On the record you can hear lot of the female vocal inspirations, this time it was Kate Bush, or Stevie Nicks (especially in the encores and extended endings of choruses), but also there’s a male’s input from Talk Talk, OMD or even Toto in the musical choice and section. And yes there’s Kurt Maloo of the Double fame too, himself, being present on the record!

KALTBLUT: Is there are particular time of day you find yourselves more likely to be inspired to make music?
Kathy: I think it’s just when the mood takes you or where the inspiration leads. For the track ‘You Said’ I wrote that in the middle of the night in a hotel room in Las Vegas. I was on holiday with my Dad and we had a few drinks and a deep conversation that was quite emotional. I woke up with a whole song in my head. It’s suffice to say I was exhausted and totally hungover the next day! Hey ho, we got a good song out of it.

KALTBLUT: Your techno cover of Kate Bush’s “Babooshka” is pretty brilliant. Was it unnerving to attempt?
Kathy: Yeah that was our little gift to Ms Bush. When we perform it onstage the crowd goes crazy. I can’t imagine how it must be to actually be Kate Bush. She’s an absolute legend.
Maxi: I was listening and playing on piano a lot of Kate Bush songs while making the record, it was a big source of inspiration. The moody atmosphere, the emotional value of them. This particular title was very dark, which fitted perfectly the idea of making a techno version. We extended this (never) for ever.

KALTBLUT: Who would your ultimate musician/band to go on tour with be?
Maxi: We did some stage appearances together with our mates from Love X Stereo Band (from South Korea), a full tour would be a great thing I guess! They’re really cool!

KALTBLUT: What song do you have on high-rotation in your homes right now?
Kathy: I’m listening to Petit Meller. I love her crazy freshness.
Maxi: I’m feeling excited and emotional when I’m listening to Lower Dens – Real Thing and of course Sean Nicholas Savage (you choose whatever song from his discography). However slowly it seems like after the months of swimming in an ocean with lyrical synth pop /wave I’m coming back to the direct, black or white, rhythm and groove oriented disco. It won’t be a surprise, but I rediscovered again a couple of gems like Anna Domino – Target, or Cameo – I just Want To be, to give you an idea.