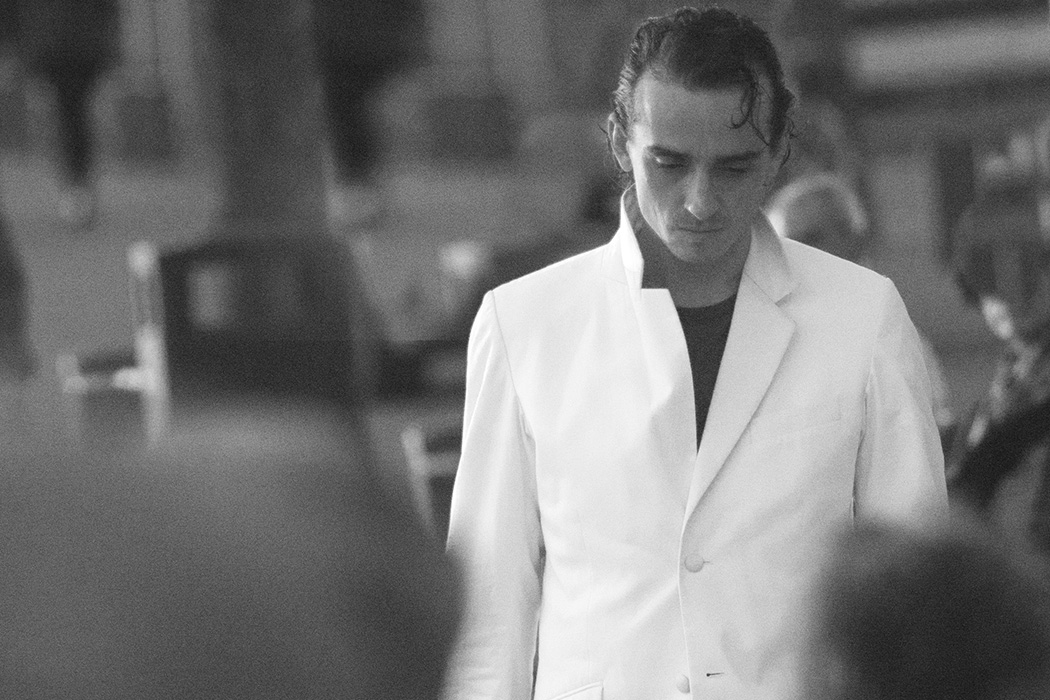 Koudlam, globetrotter, charmer, anti-hero… The mystery man released his new album Benidorm Dream in the fall of 2014 on Pan European Recordings. A couple of titles became instant hits in the circles of fashion (Colette, Chanel, or Dior, not bad!) and electronic music intellectuals; stunning anthropology videos have also contributed to extend Koudlam’s reach to high-end hipsters and beyond. Lucie and I met Koudlam right before his Berlin show at Konzulát, here is what we talked about… French to English translation courtesy of me.

KALTBLUT: We couldn’t find much info about you online, how come?

Koudlam: I work pretty hard on that. To be honest, I think it’s detrimental to the music if you know too much about the musician; it loses all mystery and space for interpretation. And as a person, I don’t really like people to know too much stuff about me either.

KALTBLUT: So who does your social media?

Koudlam: Hum, everybody, I guess. A bit me, and the label… Sure, sometimes I put stuff up there, but it’s mainly informative; social media is not where I want to express myself.

KALTBLUT: How do you feel when someone recognizes you on the street or in a café?

Koudlam: Doesn’t happen much, but when it does I’m surprised. I don’t understand it… I don’t mind, but yeah it surprises me.

Koudlam: I get up in the morning, I go to work, I have a lunch break, I work some more, then I go home, I have a light meal and go to bed, if I was productive enough, maybe I treat myself… no seriously, I mean, I try to work everyday, but of course on tour I can’t do that; and there are times that are more productive than others. I would like to be productive every day.

KALTBLUT: So you go to the studio like you would go to the office?

KALTBLUT: You don’t work outdoors, or with people?

Koudlam: When I have a collaboration going on, sure I work with people, that’s fine.

KALTBLUT: You spent a while in Benidorm to work on your last album?

Koudlam: Yeah, I went there a few times, like over three months in total. I tried to rent apartments high up in towers, I didn’t go out much, I didn’t mingle with the Brit tourists and such.

KALTBLUT: So it was a bit of a misanthropic or new romantic trip, you alone watching over people from afar?

Koudlam: Misanthropic, new romantic…? I didn’t go there for the people or the culture, that’s for sure. Benidorm has all these tourists, it’s like a poor people Ibiza, and in the winter you have hordes of retired people who come to catch some sun. I went there because a friend told me about the architecture, how insane and interesting it was, and how it felt like it had just sprung like that out of the belly of the earth. Cities, their buildings and their whole architecture fascinate me, and I needed a décor for my music.

KALTBLUT: Would you be flattered if one of your tracks became an anthem for Benidorm?

KALTBLUT: Do you feel inspired by ugliness?

Koudlam: Well, perhaps. I use a lot of things in my work that are borderline bad taste, but I try to walk the line between something tasteless or ugly and make it my own. I have been doing that for a while. Also about Benidorm as décor, I’d like to do music for a sci-fi movie, but since it hasn’t happened yet, I decided to make the music before the movie.

KALTBLUT: Is that also the story behind your videos?

Koudlam: Ah yes, it depends. With Cyprien [Gaillard] for example “See You All”  wasn’t exactly a video for my music, my music became part of his video triptych Desniansky Raion. With Jamie [Haryley], we talk, he gets inspired by the music, he has all this footage, and he watches a lot of stuff, he puts his own vision in the video as well. Like for “Negative Creep”, I didn’t think I was making a gabber-inspired track at all, it was more about jumpstyle and kind of slowed-down hardcore beats.

KALTBLUT: By the way, Negative Creep, are you a Nirvana fan?

Koudlam: Yes, for sure, totally.

KALTBLUT: So you make music, but you work on video and other things, do you see yourself as a musician only or a well-rounded artist?

Koudlam: I’ve done a lot of things, and for a while I thought I was gonna paint and only paint. But it so happens that music is what I do best for now, so at the moment I am a musician. I work on other things when I have time, but it takes a lot to push the music, so that’s what I do for now.

KALTBLUT: And how do you feel about your music being more and more recognized by the media and fashion labels… and Meetic?

Koudlam: I have no problem with the commercialization of my music.

KALTBLUT: Do you like the Meetic ad? It’s not bad.


Koudlam: I don’t know, whether it’s good or bad, it doesn’t matter. I’m not selling weapons at least. There is still a responsibility in selling stuff like that I guess, but the decision is not only mine, there is my entourage and the label as well. I’m not into it, but it gives me the freedom to develop my music the way I want to. Actually I am already working on a new album.

KALTBLUT: Can you tell us about the new album?

Koudlam: I can tell you that it will take some time because it’s the last tweaking that’s usually long to finish up, and all the logistics work around too. I can tell you that I didn’t go to Tokyo or anything like that to do it, and that I am working more with musicians. We have done new orchestrations for the current live show and I will incorporate some elements in the new album.

KALTBLUT: So will it be more organic?

Koudlam: Then yes, I guess, maybe.

KALTBLUT:And so this freedom you gain, will you use it for other sides of your work? Do you want to do something else than music, like we saw you used to do street art for example?

Koudlam: Hum, no I never did street art as such; I just did some tagging. That was a long time ago. Yes, I wanna do other things; everything in good time, maybe later or when I’m older.

KALTBLUT: A long time ago… can we still see some of your tags on the walls of Paris or Berlin maybe?

Koudlam: I think my stuff must have been covered over by now…

Koudlam: Yes for sure, it’s been a while though, I should come more often.

The show did not disappoint, good sound, stroboscope and smoke à gogo, an enthusiastic sometimes mush pit-ish and sometimes hypnotized public… the man alone on stage, against the world, protected by his sunglasses. The old hit “See You All” and the newer one “Negative Creep” satisfied, the track “Benidorm Dream” took our breath away in a great wave of badassery and second degree grandiloquence; in brief, we likey!