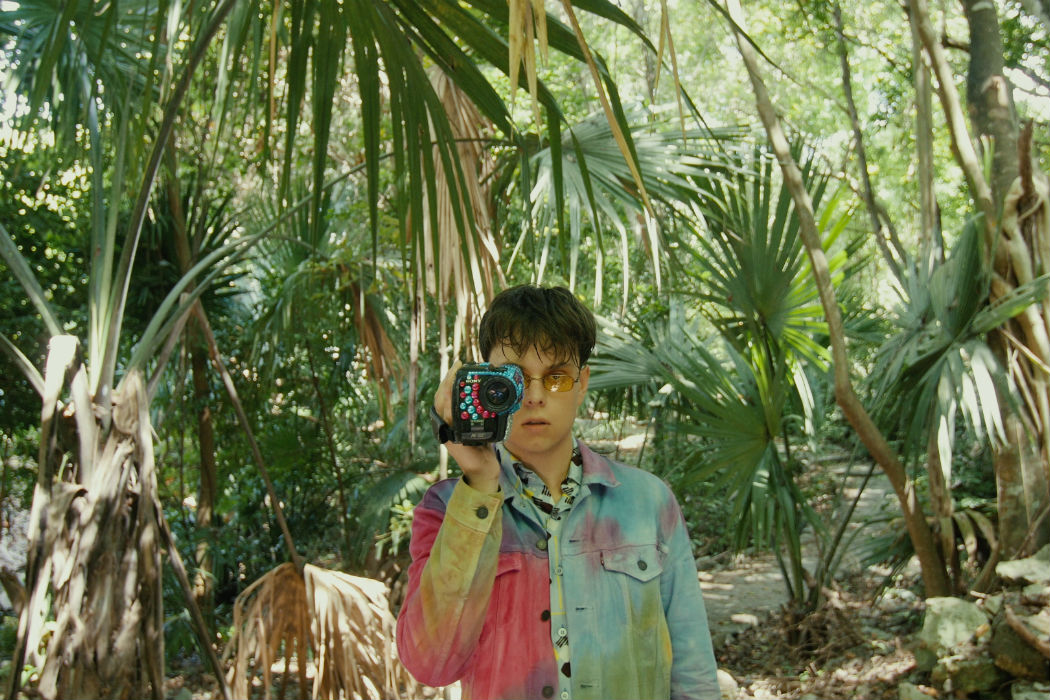 Leaving Us Amazed – Musings with I.L.Y.A

New York-based Moscow musician and producer I.L.Y.A. has a lot to say. On top of this, I Leave You Amazed is indeed a bold statement to make and I.L.Y.A. sure gives it a good ol’ go to not disappoint. From his idiosyncratic music videos and unreserved sense of style and personality, I.L.Y.A. throws in an irrepressible positivity for good measure. Making for a welcome change, I.L.Y.A. doesn’t need to try too hard. Operating with a charming and self-aware naivety, his sunny demeanour is as effortless as the ease with which he flits between his songs and delivery.

I.L.Y.A.’s penchant for the 80s and 90s certainly comes through with his own take on these innovative decades. I.L.Y.A.’s music and videos carry a clear thread of positivity and sweet innocence; the multifaceted artist can take pride in being at the creative helm and producing his own work. The backdrop of jaunty electronic pop vibes can be seen and heard on the uplifting, synths laden Uniqueness Patrol, whilst nonchalantly conveying the dangers of overconsumption over the laid-back hip-hop percussions of Franklin. Here, I.L.Y.A. posits Franklin within the current climate of the collective consciousness realising the consequences of waste and excess, of greed, power and obsession – giving an insight to I.L.Y.A.’s own inner workings and concerns.

We chat to I.L.Y.A who is currently enjoying the pursuits of the day to day living in New York and embracing the freedom that comes with the city to explore who you are.

KALTBLUT: So first off, you’re currently based in NYC – what brings you here?
I.L.Y.A.: In spring 2017, I started thinking where I’d go after finishing my degree in Moscow. I had one more year left. I’d already been to many countries by then but had never been to the US. I really wanted to visit as many friends had recommended to me. In August 2017 I travelled to New York, LA and attended a small music conference in Miami. I found myself falling in love with New York whilst simultaneously started seeing more opportunities in the international markets for my music. After finishing the final year of studies in Moscow (HSE) I decided to go to SXSW in Texas in March this year. After meeting all these people from the industry and also after talking to some people from the music industry in Moscow, I decided to go to LA or NYC for the future development of my career and development. I chose New York because I really love that city and I wanted to take some classes at NYU. I don’t regret that I made that choice. You never know what can happen to you here from one day to the next (in a good way). I love New York and I love the music scene here.

KALTBLUT: You’re originally from Moscow – what was it like growing up in Russia?
I.L.Y.A.: I’d make a distinction in that I grew up in Moscow because that city is very different from the rest of Russia. It’s a very big cosmopolitan city but it still feels that there’s a lot of unspoken rules that you need to follow otherwise you will get disapproval from the masses. I grew up in a very good family. My parents are very supportive and they always know that I want to explore, that I want to create something new. At the same time, I was always felt that I want to do something more by trying to live abroad for a while. The main thing that I noticed growing up in Russia is that you always think about what others can think about you, about what you say, about your outfit, about what you feel. I stopped thinking that way two years ago because I knew that I was not doing something “wrong” and if people were thinking that way that was their problems. While growing up I always stayed on a positive side but there were enough negative situations.

KALTBLUT: You’re a hybrid of European and American sensibilities. What are your favourite aspects of each?
I.L.Y.A.: You are so right about that. I try to work in the American music industry but I still have these European roots. I’d say that I have that European dance influence, more for instrumental parts of a song. And I get most of the thoughts for lyrics, a song structure and a hook from American music. I want to integrate my European heritage with the American pop music scene. I guess that’s how something new can be born in music.

KALTBLUT: We are feeling your anti-consumerist/over consumption attitude on Franklin and its DIY aesthetics. How much creative input do you have on your music videos?
I.L.Y.A.: Well, usually when I write a new song I always have an image in my mind that I want to bring to life in a music video. For that, I find a team whose creative vision can help me with that. Talking about Franklin, I wanted to show a contrast between the problems of our consumerist world and its consequences. I wanted to show ordinary people and these top executives. I don’t intend to shame any of these groups. I just want to show what’s going on in this world because I feel like we all at some point need to reconsider consumption of some goods because resources of our planet are not eternal and undeveloped countries receive a very negative impact from all of that too because a lot of waste goes there.

KALTBLUT: You drop a bit of French in there too – any particular reason why?
I.L.Y.A.: Franklin has that chill and kinda sexy sound. In the chorus, English sounded too boring for me and then I remembered that I also speak French! I checked that hook “one Franklin pour toi, one Franklin pour moi” on some of my friends and it stuck in their heads and I’d realised that that’s the one!

KALTBLUT: All your music videos have a playful element but like your music), each is quite different from each other.
I.L.Y.A.: That’s true My stage name I.L.Y.A. stands for I Leave You Amazed. I want to keep surprising the audience in a good way. I don’t feel like I belong to one particular genre, I just try to keep my songs pop, hooky and groovy. I don’t want to go deep into experimental music. I want to keep my songs simple but interesting at some point. Visuals are very important for me too because that’s a way to show the whole story. Basically, you can say that all my music videos are very close to what I had in my mind when I was creating any of my songs. I think music videos are a very important component of each song because that’s how an audience can feel it better.

KALTBLUT: You seem to have an underlying message in all your videos and songs. How important is this as a continual theme in your work?
I.L.Y.A.: The whole point of my music is making catchy pop songs with strong lyrical messages because I think that’s that way how you can deliver an important message to as many people as possible. Pop and hip-hop are two the most popular genres nowadays. But don’t think that I try to adjust my music to people’s tastes. I really feel that way that I want to make that style of music and I will always put some message in my music. There are just a few artists who do that.

KALTBLUT: We are absolutely loving your style game, a mix of street leisure wear, vintage with a bit of glam. Who or what are your fashion inspirations?
I.L.Y.A.: Thank you! I take it as a compliment. I can’t think of an adjective that can describe my style but you can help me that. You know, fashion has been always an important life of my artistic vision and everyday life as well. I can’t say that there’s a particular person whose style inspires me. I make my own style. I just wear what I feel I need to wear. I like mixing different fabrics like velour or suede with some more traditional fabrics like cotton. Also, I love interesting prints or unusual design that’s one of the reasons why I admire Virgil Abloh, Demna Gvasalia and their works. I’m a big fan of South Korean and Japanese fashion. I really like finding unique pieces as well that’s why I visit a vintage store in every city I go because you never know what you can find that. For the music videos, usually I choose my outfits by myself but for Franklin, I worked with my very good friend, stylist, Samantha-Sungeun-Kim. She really helped me to bring my fashion vision for that project to reality.

KALTBLUT: You’re a very distinct character as an artist yet quite mysterious. Is there something you can share with us that no one else knows about the inner-workings of I.L.Y.A.?
I.L.Y.A.: I can say that I’m currently working on my second EP which I plan to release in Spring 2019 which means that you’ll have more cool songs and music videos. I’ll keep experimenting in music styles but I’ll stay true to myself. I have a lot of inspiration here in New York and I’m still thinking about the general vibe of my upcoming record: more political or more inspirational. Maybe I’ll keep them both. I just want to cover as many topics as possible.

So, we have a few quick-fire questions for you. Here goes:

KALTBLUT: What is your earliest memory?
ILYA: I guess one of my grannies. She passed away when I was around 2 but I still have of her being in our apartment and playing with me.

KALTBLUT: 3 things you can’t live without?
ILYA: My MacBook where I write all my music, my gym membership (I like to work out in all variations: from weightlifting to yoga) and my earbuds because sometimes I just want to put surrounded sound on mute and listen only to music that I like.

KALTBLUT: If you could live in any era, which would it be and why?
ILYA: I’d like to live in around 1900s as that’s a time of industrialization. A lot of new things appeared in our lives. Economic growth, cities growth, art expansion into new fields. I find that era very exciting for our history.

KALTBLUT: If you were forced to choose and eat only one meal repeatedly for the rest of your life, what would that be?
ILYA: I’d say burgers but it’s too unhealthy to eat every day. So probably poke bowls would be better!

KALTBLUT: What was the last band/artist you listened to?
ILYA: The last single “We appreciate power” by Grimes. She’s very talented and her vision is so unique. Our world needs more artists like her.

KALTBLUT: What memorable moment in your life has left YOU amazed?
ILYA: No one asked me that question before. You know I had a lot of positive events and situations in my life but I kinda feel like that all happened just because of my family or me being a nice and kind person every day and I really value that fact. And of course, there are some surprises from my family or my friends but I think that unexpected moment that really left me amazed is still meant to happen in the future. Believe in yourself, work hard and someday everything will be rewarded.