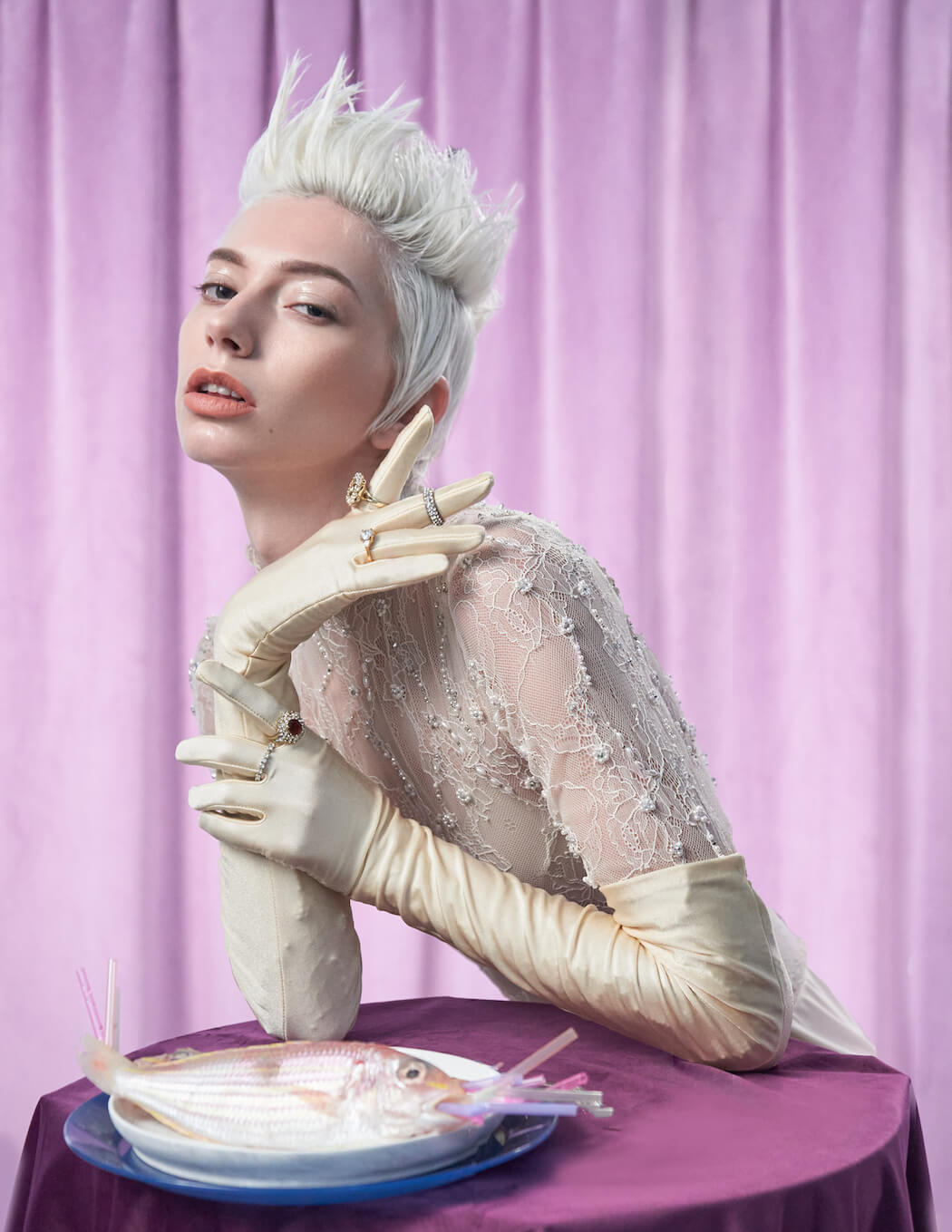 Life in Plastic by Leyla Bulatova

A short fashion film premiere: ” Life in Plastic” with the non-binary model Jude Karda as a lead. The film touches on the issues of micro-plastic pollution caused by fast fashion and the popularity of synthetic fabrics and plastic as a fashion accessory. Brands are Tintein ( thrift collective), ASOS, Serio Couture.

Though the world bans plastic in every-day life, it’s still a dominant force on the runway of haute couture and the shelves of stores. Suddenly, wearing plastic became a trend, where fashion makers introduce more and more plastic- containing materials into the world under the label “recycled”. However, the nature of trends is a fast-paced, meaning that all the trendy garments will be disposed of. They will make their way into landfills and oceans, creating microplastic and polluting the environment. By wearing these garments on our bodies, we introduce plastic into the ecosystem, eventually consuming it by eating seafood. At this point plastic becomes us!

Director’s Bio
Leyla Bulatova is an emerging film director with a background in graphic design and a bachelor’s degree in Integrated Media from OCADU. Born to a family of ethnic minorities (both parents represent two different nationali- ties: Tatar and Mordva) she could never fit in either mold. Meanwhile, in Canada, Leyla is viewed as a “Russian,” this frustration which has led her to artistic exploration on the subject of personal identity.

Recently, Leyla began to produce work in the realm of Fashion Editorial Photography. By working directly with stylists and makeup artists, she began to realize the carbon footprint every look contains. It may not be immediately obvious but every stretchy fabric, every piece of glitter is, essentially plastic.

Her first experimental art film “Hollywood,” (explores relationships between our natural and “enculturated” identities) was screened at the Imagine Cinema/Carlton cinema. Her Experimental dance film “Veil of Acumen” was selected as a part of the Experi- mental Film Festival 2018. In this Dance film, the use of plastic was a metaphor for identity which caused Leyla to examine its use in the creation of art and fashion. In her latest work “Life in Plastic,” Leyla interprets her experiences working in Editorial Pho- tography and Film into a visual statement against unconscious consumption and fake eco trends which in reality are used as a marketing tool.

As of now, Leyla is working on a personal essay on the subject of belonging and diversity. Immigrated to Canada, 9 years ago Leyla noticed that her identity shrinks to “Russian” in the eyes of many Canadians. When she comes to her home-country the Russians identify her as “other” and say “you people”.

In her video essay ” What’s your background?” Leyla wants to point the light towards ethnic minorities of Russia. How they struggle to maintain identity living with the majority of “white Russians”, forced Russification and the aftermath of Soviet regime? How those minorities are being perceived with in the country and abroad? Leyla is basing her narrative on her personal experiences and her family’s history.