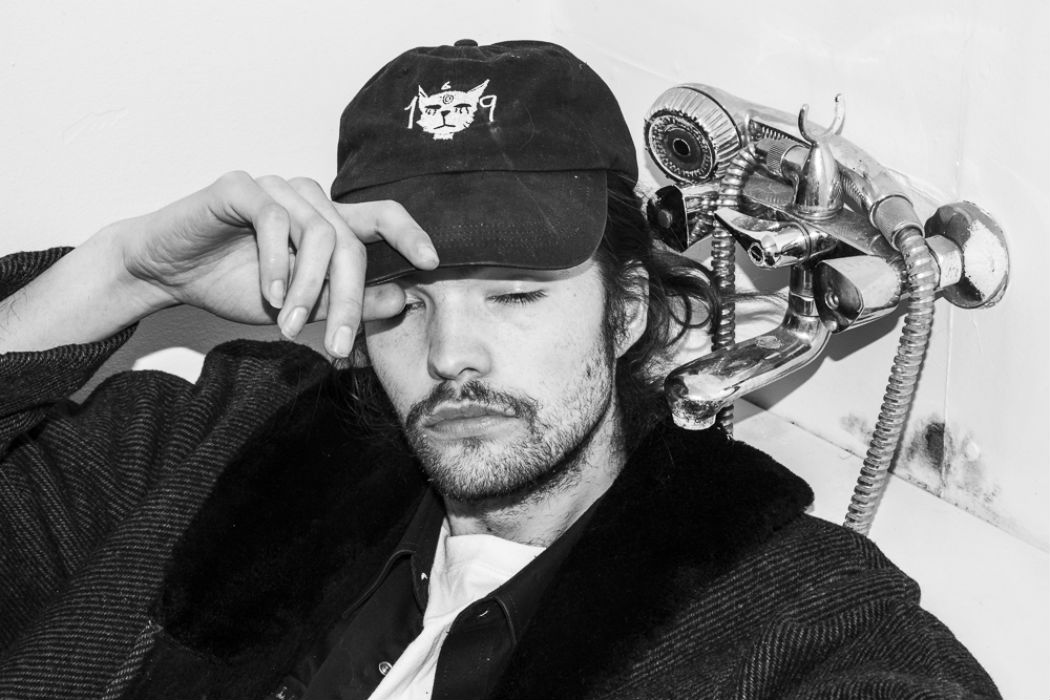 On the 17th February, The FALK music and art collective from Iceland officially announces its 1st release for 2017 – Lord Pusswhip is Dead by LORD PUSSWHIP. The album will be released on digital and on a short run of 50 cassettes, and will be available to stream and download via FALK’s Bandcamp page. Lord Pusswhip is Dead is a compilation album that features 20 tracks (with additional bonus tracks in the digital release) that covers the short but fervent career of Icelandic rapper and producer LORD PUSSWHIP aka Þórður Ingi Jónsson, from 2011 to the present day. In the fast rising scene that is Icelandic hip-hop, Pusswhip’s productions stand out from the crowd. Steeped in abstract and cultic sampling, chopped and screwed beats and strings, and narcoleptic slurred rap lines, listening to Lord Pusswhip is a decidedly woozy and messy trip, where the lines between time and perception become porous and broken.

Despite the laidback nature of his music, Pusswhip is a constant blur of music and action. Finding himself a major player in the Icelandic hip hop landscape, he has produced beats and collaborated with numerous Icelandic contemporaries, while at the same time racking up production credits for Antwon, Kojey Radical and Prada Mane. Now residing in Berlin, Pusswhip also hosts the radio show “Puss on a Wire” on Berlin’s radio80k.de.

Despite having this release lined up for a number of months, communications from Pusswhip to FALK have been rare. In fact, few people, including close friends, had been unable to contact him, either face-to-face or digitally, since the Iceland Airwaves festival last November. With no tracks or artwork forthcoming, and with no way of getting in contact, FALK was facing up to the possibility of having to delay or even shelve this release. Then 1 week ago, they received a WeTransfer link containing 20 tracks, artwork based on the obituary notice found in the Icelandic press, and this short, cryptic message.

“If you are reading this then LORD PUSSWHIP is dead. Of rather I have decided to draw a closing line between this period of my life in order to protect the ones that I love and hold dear to me, so that I may prepare for the next stage in what is an interdimensional war against what Burroughs calls ‘The One God Universe’ and its brutal regime of order that harks the slow death of love and freedom.

People may not realise but my whole life has been one of time sorcery and reality hacking. My parents, unbeknownst to even their closest friends, were occultic anarcho communists who were waging a low level but persistent war against the archons who preside over the global security deep state. Taking on the bourgeois cloaks of holding positions in art and televisual media, they hid in plain sight while conducting various guerrilla sorties against the capitalist deploying all manner of esoteric weaponry: Enochian Hexes; Lemurian Deep Time IEDs: Psychic Assassinations; Lovecraftian Sorcery to induce ‘paranoid-chronomaniac hallucinations’ with targeted businessmen and politicians.

My Parents trained my brother and I to carry on their good work where age and circumstance mad it unable for them to do so. And since 2010, I have been using the powers inherent in the occultic sample, splicing it with abnormal sonics and the corrupted nature of the time manipulating software to generate abnormal cultural velocities, personal magic that can break past the walls of unknowing and generate weaponised hyperstitions. Against what I call the “Black Order”, those mysterious cloaked and diseased entities of the One God Universe who use regimes of capital boosted by tectonic stack AI systems, I have been building my own subjectivity engine, spinning a different web of music designed to disrupt and disturb those who have been blinded or numbed by the over stimulation of capital and machine generated affect that rules our lives. The tracks I have given you are a systems map, a concept of technics to achieve perceptual freedom from the darkness that envelops us 24/7.

Alas, I have had to conduct this one-man war alone. Many of my closest friends and collaborators – Countess Malaise, Vrong, Svarti Laxness, Marteinn, Alfreð Drexler, and VNUS808, have been kept in the dark on the true nature of my work and thus have been completely unaware about the inherent risks that I have put them under. What was for them just a mere outlet for personal expression was for me the training to be able to carry on the battles of my family line and wage psychic combat against our enemies. And as my name has become material in many publications in Iceland and abroad, this has brought me to the attention of the Archons of the Black Order who have been conducting their own occultic brand of dirty war strategies, targeting not just me but those who are my kith and kin. Despite my relocating to Berlin and the increases in my magical defences, this have become too dangerous for those around me.

As such, I must now destroy this current entity that is LORD PUSSWHIP, and go to ground. This doesn’t mean that you will no longer see me, for I have placed numerous programmed inforgs on various social media to hide my digital footprint and blend into the shadows. But I will personally not be reachable on this realm for some time. I therefore entrust this music to you to do with what you see fit; just ensure that you can get it to those who need it most.If and when I return as LORD PUSSWHIP, it will not be as you remember.”

Lord Pusswhip is Dead will be released 17th February via FALK